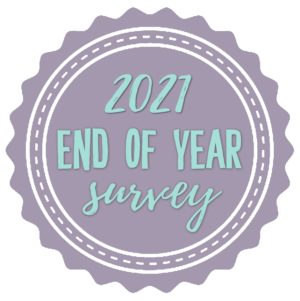 (Wow, I didn’t realize I’d been doing it every year for my whole blogging career!)

2. Book you were excited about & thought you were going to love more but didn’t?
Vespertine. I adored Margaret Rogerson’s other two books to pieces and thought this was going to be 4.5-5 stars, but sadly it wasn’t. I did still enjoy it, but I was bored for the first half and it was only a 3.5-4 star read.

3. Most surprising (in a good way or bad way) book you read?
Sinister Magic by Lindsay Buroker! I am not a big Urban Fantasy fan, but I picked it up on a whim because it was on Kindle Unlimited. And I LOVED it!

4. Book you “pushed” the most people to read?
Always the Lotus War trilogy by Jay Kristoff! This will never change!

7. Best book from a genre you don’t typically read/was out of your comfort zone?
House in the Cerulean Sea. Absolutely did not expect it to blow me away like it did!

8. Most action-packed/thrilling/unputdownable book of the year?
Aurora’s End!

9. Book you read that you are most likely to re-read in the next year?
House in the Cerulean Sea or Empire of the Vampire

*side note: I said Night of the Dragon via audio last year, and I did listen to it this year!

10. Favorite cover of a book you read this year?
Empire of the Vampire (UK cover)

11. Most memorable character of the year?
Saoirse from Empire of the Vampire

12. Most beautifully written book you read?
House in the Cerulean Sea

13. Most thought-provoking / life-changing book you read?
This is always hard for me, as I don’t usually read those kinds of books. I didn’t really have one this year

14. Book you can’t believe you waited UNTIL this year to finally read?
Dune

15. Favorite passage/quote from a book you read?

“A life without books is not a life lived.”

17. Book that shocked you the most?
Empire of the Vampire! Damn, Jay is great at bomb dropping and me not seeing it coming. My answer last year was Aurora Burning – so there’s two character twists that I did NOT see coming!

18. OTP OF THE YEAR (you will go down with this ship!)
Fin & Scarlett or Zila & Nari from Aurora’s End

19. Favorite non-romantic relationship of the year?
Gabe and Dior from Empire of the Vampire!!

21. Best book you read that you read based SOLELY on a recommendation from somebody else/peer pressure/bookstagram:
House in the Cerulean Sea

22. Newest fictional crush from a book you read?
I’m just gonna go with Kal from the Aurora Cycle again lol (my pick from last year)

25. Book that put a smile on your face/was the most fun to read?
Vespertine! The dynamic between Artemisia and the revenant was hilarious!

26. Book that made you cry (or nearly cry)?
Aurora’s End and Light in the Mist both had me sobbing! Empire of the Vampire and Squirrelflight’s Hope made me cry a decent amount, too

27. Hidden gem of the year?
Infinity Courts or Sinister Magic

28. Book that crushed your soul?
Light in the Mist by Erin Hunter destroyed me!!

30. Book that made you the most angry (doesn’t necessarily mean you didn’t like it)?
Hmm probably a three way tie between:
1. Dune (which made me angry that I wasted time reading it)
2. Dragon Republic (because Rin was pissing me off) and
3. From Blood and Ash (because the main character was insufferable and it was generic and I don’t know why the CRAP I read the damn thing)

1. New favorite book blog you discovered?
I didn’t look at any blogs this year :(

2. Favorite review that you wrote?
I guess my DNF review of Ashfall Legacy (because you know I love writing the ranty ones lol)

3. Best discussion/non-review post you had on your blog?
I didn’t have any *cries*

4. Best event that you participated in (author signings, festivals, virtual events, memes, etc.)?
I didn’t sadly, because I was on my honeymoon while YALLfest was happening this year :(

5. Best moment of bookish/blogging life?
Well, my husband did message Jay Kristoff, who recorded a congratulatory marriage video for us, as a wedding gift! That was pretty damn awesome!

7. Most popular post on your blog (whether it be by comments or views)?
I’m pretty sure I didn’t top like 1-2 comments on anything this year. I don’t ever have engagement anymore because I haven’t been putting the effort into it.

8. Post you wished got a little more love?
I suppose my 5 star books posts

9. Best bookish discovery (book related sites, book stores, etc.)?
I don’t have one for this, either :(

10. Did you complete any reading challenges or goals that you had set for yourself at the beginning of the year?
lol, nope. I wanted to get to 10 re-reads for my Re-read Challenge, and I only got to 7. I also wanted to read 75-100 books in 2021 and I only got to 55. In my defense, I had a wedding to plan so that sucked up most of my free time!

1. One book you didn’t get to last year but will be your #1 priority this year?
Firestar’s Quest

2. Book release you are most anticipating (non-debut)?
Dark Theory by Wick Welker

3. 2022 debut you are most anticipating?
Blood Scion by Deborah Falaye

4. Series ending/sequel you are most anticipating?
The Genesis Wars (Infinity Courts #2) by Akemi Dawn Bowman

5. One thing you hope to accomplish or do in your reading/blogging life?
I would really love to read 100 books! I haven’t reached 100 since 2013!

Pie charts made with Canva! 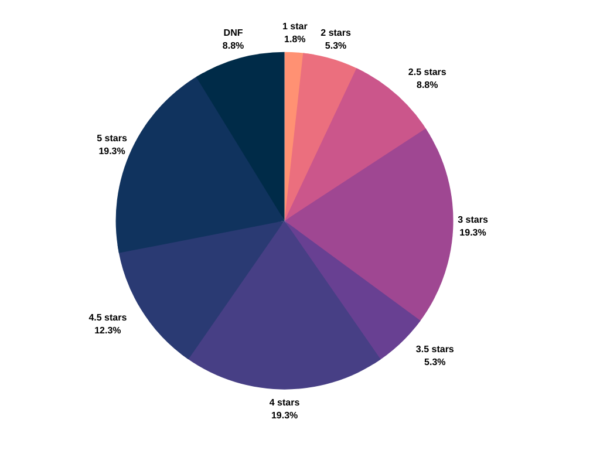 My number of DNFs was very small this year. I had 29 DNFs last year and only 5 this year!! But, sadly, I also had a MUCH higher number of meh books because I didn’t DNF as many. Almost half of all the books I read were 3 stars or lower. And the only reason I have so many 5 stars is because of my re-reads – I only had 4 new 5-star books this year :( 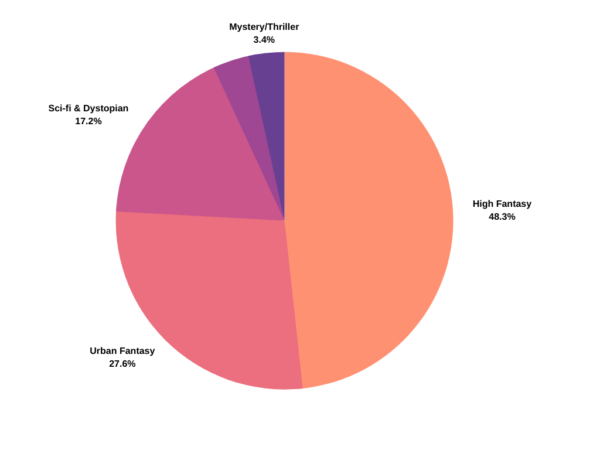 Last year I actually branched out and managed to read non SFF for a good 1/3 of all the books I read. I said I wanted to do that again this year, but it didn’t happen. Oops. 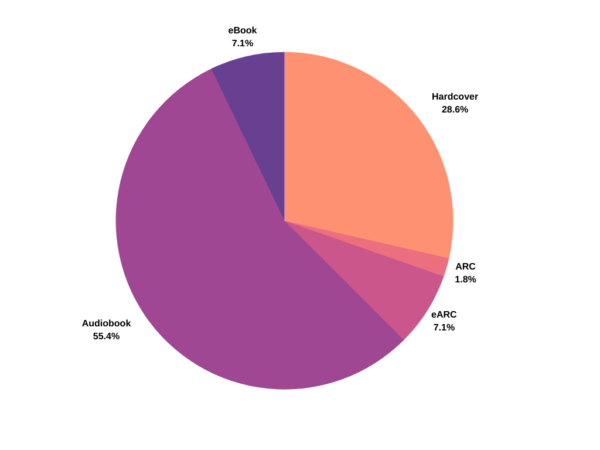 This is SUPER weird but I read zero paperback this year! I’m also doing really well at not accepting many review obligations so my ARCs/eARCs were fairly low. I only read 5 advanced copies total all year! It’s freeing not to have as many obligations and to just be able to read what I want to. 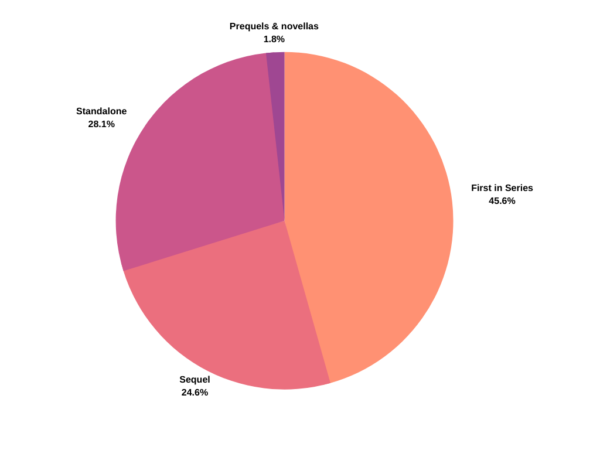 Sadly, just like last year, I didn’t read any anthologies this year and only one novella. I said I wanted to read more, but I’m not really a big short story person so it probably still won’t happen next year, lol. 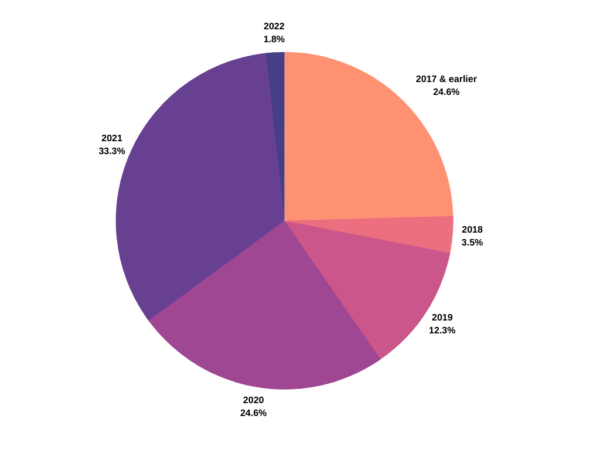 I had a decent mix of old and new again this year! 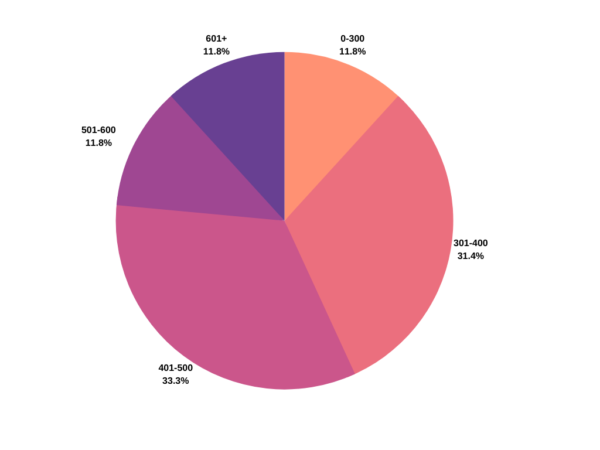 What do your reading stats look like for the year? Are there any books on my list that you agree or disagree with? 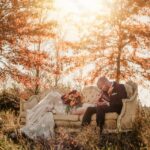