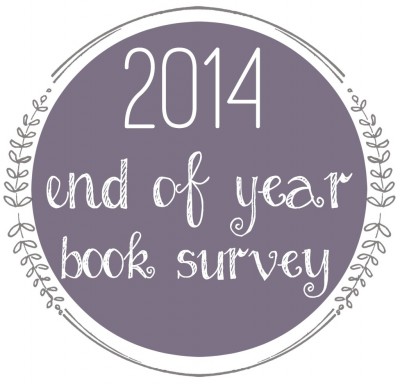 Number of books you read: 60
Number of re-reads: 2, The Gathering by Kelley Armstrong and Linger by Maggie Stiefvater
Genre you read the most from: Fantasy or Dystopian

2. Book you were excited about & thought you were going to love more but didn’t?
There were quite a few of those! Angelfall, Promise of Shadows, Black City, Fiendish…

3. Most surprising (in a good way or bad way) book you read in 2014?
Hmm, maybe Written in Red by Anne Bishop? I pretty much knew I would like it, I just didn’t expect to enjoy it as much as I did!

4. Book you “pushed” the most people to read in 2014?
Stormdancer by Jay Kristoff

5. Best series you started in 2014? Best sequel of 2014? Best series ender of 2014?
Best series started: Tie between Darkest Minds by Alexandra Bracken and The Others by Anne Bishop! I have high hopes for both of these :)
Best series finisher: ENDSINGER. Even though it shattered my heart and soul.

7. Best book from a genre you don’t typically read/was out of your comfort zone?
The Sea of Tranquility by Katja Millay

8. Most action-packed/thrilling/unputdownable book of the year?
Lockdown by Alexander Gordon Smith!

9. Book you read in 2014 that you are most likely to re-read next year?
Honestly, I don’t really re-read unless it’s been years and I don’t remember the book (or I’m doing a series refresher). I don’t really have time for that :(

11. Most memorable character of 2014?
Buruu, hands down. He’s basically my favorite character ever. Warner probably comes in close second!

12. Most beautifully written book read in 2014?
Endsinger by Jay Kristoff!

14. Book you can’t believe you waited UNTIL 2014 to finally read?
The Darkest Minds by Alexandra Bracken!

Words are like seeds, I think, planted into our hearts at a tender age. They take root in us as we grow, settling deep into our souls. The good words plant well. They flourish and find homes in our hearts. They build trunks around our spines, steadying us when we’re feeling most flimsy; planting our feet firmly when we’re feeling most unsure. But the bad words grow poorly. Our trunks infest and spoil until we are hollow and housing the interests of others and not our own. We are forced to eat the fruit those words have borne, held hostage by the branches growing arms around our necks, suffocating us to death, one word at a time.       -Ignite Me, by Tahereh Mafi

17. Book that shocked you the most?
Lockdown by Alexander Gordon Smith. More like horrified, really…

18. OTP OF THE YEAR (you will go down with this ship!)
WARNER AND JULIETTE

19. Favorite non-romantic relationship of this year?
BURUU AND YUKIKO. Not just of the year, but favorite ever!

20. Favorite book you read in 2014 from an author you’ve read previously?
Endsinger, duh.

21. Best book you read in 2014 that you read based SOLELY on a recommendation from somebody else/peer pressure:
Solely? Honestly, I wouldn’t read anything if I wasn’t interested in it already >.<

22. Newest fictional crush from a book you read in 2014?
Uhhh…honestly, I don’t really get them much anymore. Warner was the only guy that stood out from books read this year, and it’s not a new crush…

23. Best 2014 debut you read?
Actually, I think I DNFed all the debut authors I read – Cruel Beauty, Landry Park, Talker 25, Salvage, and Half Bad are the only ones I can find, and I DNFed every last one of them…

25. Book that put a smile on your face/was the most fun to read?
Written in Red!

26. Book that made you cry (or nearly cry) in 2014?
Well, seeing as how “book that crushed your soul” is coming up, I’m not going to say Endsinger. The Forever Song by Julie Kagawa is the only other book that made me cry all year!

27. Hidden gem of the year?
House of Ivy and Sorrow by Natalie Whipple. It had a lot of bad ratings, so I didn’t expect to enjoy it as much as I did!

28. Book that crushed your soul?
Endsinger by Jay Kristoff. Actually, “crushed my soul” isn’t even the half of it. I was bawling for an hour after I finished, and I couldn’t stop. Then I went back and read the ending again and bawled for another hour. Even now, weeks after finishing, I can’t think about it without tearing up. I’ve never had a book get to me so bad!

29. Most unique book in 2014?
Even though I kind of hated it, the first book that comes to mind is Every Other Day by Jennifer Lynn Barnes.

30. Book that made you the most angry (doesn’t necessarily mean you didn’t like it)?
Black Ice by Becca Fitzpatrick. And in this case, it did mean that I didn’t like it.

1. New favorite book blog you discovered in 2014?
Pivot Book Reviews! I love Becca, she’s so spunky and her posts are always bursting with that spunk!

4. Best event that you participated in (author signings, festivals, virtual events, memes, etc.)?
YALLFEST! You can see my recap of YALLfest here :)

5. Best moment of bookish/blogging life in 2014?
I’ve got a few of those: Meeting Reanna, Octavia, Anita Grace Howard, Paula Stokes, and Laini Taylor!

7. Most popular post this year on your blog (whether it be by comments or views)?
Whoa, for some reason my Chaos of Stars review got 955 views O_O I don’t even know why, there’s nothing special about it…it’s not even one of my better reviews!

8. Post you wished got a little more love?
Any of my Life of a Blogger posts. I don’t feel like they’re nearly as popular as they used to be, and I’m starting to wonder if anybody really cares about them anymore (other than like 6 regular participants).

10. Did you complete any reading challenges or goals that you had set for yourself at the beginning of this year?
I did! I’m pretty proud, because I completed ALL of them :D This is the first year I’ve completed every single challenge – probably because I only participated in 4 of them, and in previous years I did 7!
-My overall reading goal was 60 books…I just read book number 60 and I still have some time left!
-I blew my Prequel & Sequel Challenge goal out of the water – my goal was 100 points and I ended up with 149!
-Review Pile Challenge: 34/26
-Rewind Challenge: 30/30
-Fur & Fangs Challenge: 10/10

2. Book you are most anticipating in 2015 (non-debut)?
Hmm, probably A Court of Thorns & Roses by Sarah J. Maas

3. 2015 debut you are most anticipating?
An Ember in the Ashes by Sabaa Tahir! I am DYING to get my hands on that one.

4. Series ending/sequel you are most anticipating in 2015?
Ensnared by Anita Grace Howard!

5. One thing you hope to accomplish or do in your reading/blogging life in 2015?
I don’t know, I’m pretty happy with where I’m at. So just keep doing what I’m doing, I guess :)

6. A 2015 release you’ve already read & recommend to everyone:
GLASS ARROW!