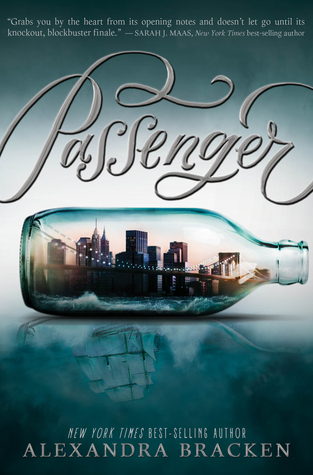 passage, n.
i. A brief section of music composed of a series of notes and flourishes.
ii. A journey by water; a voyage.
iii. The transition from one place to another, across space and time.

In one devastating night, violin prodigy Etta Spencer loses everything she knows and loves. Thrust into an unfamiliar world by a stranger with a dangerous agenda, Etta is certain of only one thing: she has traveled not just miles but years from home. And she’s inherited a legacy she knows nothing about from a family whose existence she’s never heard of. Until now.

Nicholas Carter is content with his life at sea, free from the Ironwoods—a powerful family in the colonies—and the servitude he’s known at their hands. But with the arrival of an unusual passenger on his ship comes the insistent pull of the past that he can’t escape and the family that won’t let him go so easily. Now the Ironwoods are searching for a stolen object of untold value, one they believe only Etta, Nicholas’ passenger, can find. In order to protect her, he must ensure she brings it back to them— whether she wants to or not.

Together, Etta and Nicholas embark on a perilous journey across centuries and continents, piecing together clues left behind by the traveler who will do anything to keep the object out of the Ironwoods’ grasp. But as they get closer to the truth of their search, and the deadly game the Ironwoods are play­ing, treacherous forces threaten to sep­arate Etta not only from Nicholas but from her path home . . . forever.

“Know this, pirate, you are my passenger, and I will be damned before I let any harm come to you.”

I have been DYING to get my hands on this book for months. The Darkest Minds trilogy is one of my favorites! It was a wonderful feeling to finally get this book in my hands. And just like I thought I would, I really enjoyed it!

It didn’t blow me away like I was hoping it would, but it was a wonderful book nonetheless. Bracken has beautiful storytelling, and even when there’s nothing happening she sucks you into her stories. This book was so quotable! I could almost make a whole review just from quotes I loved from this book. (Also, this book is absolutely beautiful inside and out – check out the title page and the beautiful naked cover!)

They were two ships sailing in opposite directions, having met for a short time in the middle of the voyage, and he could no sooner keep her than capture the wind.

I loved Nicholas and Etta! They had such a beautiful relationship. I think the driving point of this book was the characterization, the development, and the relationships. This book is a romance. Now, I’m not big on romance, but Nicholas and Etta’s felt so real that I couldn’t help but love it. I became invested in it. In them, together. I found myself cheering for them. There were so many swoony moments! You guys, it was SO BEAUTIFUL. View Spoiler »Which made the ending suck even more. I NEED THEM TO BE TOGETHER. They have to be. (Also Etta is obviously not dead, I did not believe that crap for a minute.) « Hide Spoiler

“The battle’s ours, pirate. They’ll strike their colors, and it will pass.”

Bracken did a fabulous job bringing the historical world to life. It was very real and convincing, but what I was most impressed with was the way she brought the feeling of the racism and sexism to light. It’s in a time where there were still slaves, and African Americans had no rights. Neither did women. Both were seen as property. It was rather infuriating, actually. The treatment of Nicholas made my blood boil sometimes. I also can’t imagine what it would have been like to have been a women in that era. You are a man’s property, you have no rights, and you can’t speak for yourself. You have to mind your tongue at all times, be subservient and demure. GAG. Etta struggled with that because she was a very strong-willed, outspoken woman. I think that’s why I liked her so much: She reminded me of me!

That ending though, man. I neeeeed to know what happens!! The wait for the second book is going to be horrible :(

“It’s our choices that matter in the end. Not wishes, not words, not promises.”

“There are times, Miss Spencer, you defeat me utterly.”

The melody of her heart had no name; it was quick, and light. It rolled with the waves, falling as the breath left his chest, rising as he inhaled. It was the rain sliding down the glass; the fog spreading its fingers over the water. The creaking of a ship’s great body. The secrets whispered by the wind, and the unseen life that moved below.
It was the flame of one last candle.

He made her feel brave; he let her be who she was unconditionally, without judgement, and because of it, she felt life shifting around her into something that felt much more beautiful and clear.

Love was selfish, wasn’t it? It made honest men want things they had no right to. It cocooned one from the rest of the world, erased time itself, knocked away reason. It made you live in defiance of the inevitable. It made you want another’s mind, body; it made you feel as if you deserved to own their heart, and carve out a place in it.