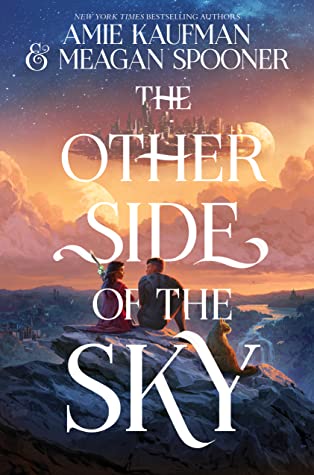 New York Times bestselling author duo Amie Kaufman and Meagan Spooner have crafted a gripping tale of magic and logic, fate and choice, and a deadly love. Perfect for fans of Laini Taylor and Brandon Sanderson.

Prince North’s home is in the sky, in a gleaming city held aloft by intricate engines, powered by technology. Nimh is the living goddess of her people on the Surface, responsible for providing answers, direction—hope.

North’s and Nimh’s lives are entwined—though their hearts can never be. Linked by a terrifying prophecy and caught between duty and fate, they must choose between saving their people or succumbing to the bond that is forbidden between them.

If you enjoyed These Broken Stars, you’ll definitely enjoy this one too! It had a similar feel despite the fact that the world and concept was pretty different.

I loved the setting and the concept! There’s a land of magic and gods on the ground, where only one remaining divinity still reigns. All the rest of the gods are believed to have abandoned the land of magic to the sky, but there’s a hidden city of science in the sky and the people there have forgotten the land of magic and believe no one lives on the ground. It was SO AWESOME!! I totally loved the blend of magic and science and the two contrasting worlds. In the beginning, I was really onboard. I wanted to crawl in the pages and live there! It’s been one of my favorite settings in quite some time.

Also, THERE IS A CAT SIDEKICK!! I repeat, a cat sidekick!! Obviously this gets bonus points from me, the cat lover. I’m sad that he wasn’t sentient and didn’t have an actual name, but he was still my favorite character! I love that he was a constant companion and moral support for Nimh. I loved him so much!

My interest did wane a bit in the middle, though. It got a bit slow after Nimh and North meet and she takes him back to her village. Not much happens for about 30% in the middle. But it picked up again toward the end! The end brought back all the action and intrigue I enjoyed about the beginning, along with a couple of surprises!

I thought the idea of the divinity was cool as well as the magic, but I do feel like the magic system wasn’t explained very well. I would have loved to know more about how it works. Other than Nimh and her rival’s magic, I only had a vague gist of it. From what I gathered, regular people could wield magic as well, but I never really grasped how it worked.

My only other complaint is that I didn’t really connect to the characters as well as I’d hope. Other than Nimh, no one else had much depth to them. North was very bland, and I didn’t care much about him; which also made me not care about the romance between Nimh and North.

The ending made up for it, though! I’m really interested to see where things go in book 2!