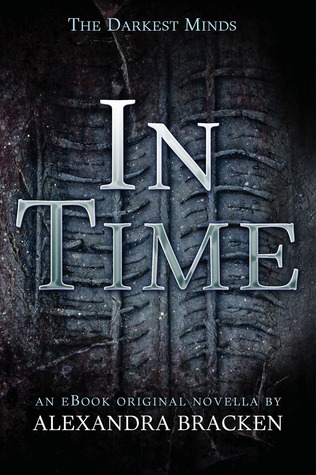 Gabe's life has been devastated in the wake of the economic crash. The only option left for someone like him to escape his tragic past is to leave his small town behind and to attempt to become a skiptracer. This already almost impossible task is made all the more difficult by his first score, a young girl who won't speak, but who changes his life in ways he could never imagine.

At first, I didn’t really care about the story. I tend to see novellas as a waste of time, nothing but filler. But as soon as Zu made an appearance, I was interested. And I found myself becoming more and more invested in the story. And to tell you the truth, this story actually isn’t just filler like most novellas!

I didn’t care for Gabe at first, but I think that’s kind of the point. He’s kind of a jerk in the beginning, and sees the kids as “freaks” and compares them to dogs. But, that’s what he was taught. He believed what he was told. Refers to the kids as “it” instead of giving them a gender, so they don’t associate them as human. It was horrible, really. The way he thought of them was kind of repulsive.

Until along comes Zu. At first, she’s just a pay load to him. But slowly I could see how he started to soften toward her. I loved it! It was endearing that he kept making excuses for his behavior, not willing to admit to himself that he was starting to see her as a little girl instead of a freak. Starting to sympathize with her. It was adorable!

I found it interesting when Gabe said “She’s wrong about me.” Because in all actuality, she was right. But she wasn’t thinking of him the way he thought she was. He assumed that she thought him incapable of handling the situation, and that was why she kept slipping out of her handcuffs and taking care of the both of them. But really, she saw the good in him. She knew he could be trusted. So in truth, she was right about him. I love how she broke down those walls!

Just like in The Darkest Minds, I found Bracken’s prose to be very engaging. There’s just something interesting about it. I love how Gabe would make rhetorical statements from time to time – I’m not proud of it, okay? – which made it feel as if he were telling the story to you as the reader.

View Spoiler »LIAM’S MOM OMG! I was totally shocked by the revelation that Della was Liam’s mom and ALL THE FEELS. So awesome! « Hide Spoiler

Um, THAT ENDING. What the crap man!!! A cliffhanger on a novella?! View Spoiler »I HAVE TO KNOW IF HE’S ALIVE. I NEEEEED TO KNOW. « Hide Spoiler

On to Never Fade!

Dad used to say that it took effort to think good, positive thoughts, but it was easy to let your mind spiral to all the terrible outcomes, to worry about the things that hadn’t even come to pass yet.

Sometimes darkness lives inside you, and sometimes it wins.

3 responses to “Review: In Time by Alexandra Bracken”