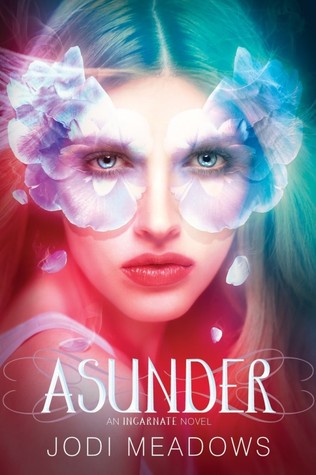 DARKSOULS
Ana has always been the only one. Asunder. Apart. But after Templedark, when many residents of Heart were lost forever, some hold Ana responsible for the darksouls–and the newsouls who may be born in their place.

SHADOWS
Many are afraid of Ana’s presence, a constant reminder of unstoppable changes and the unknown. When sylph begin behaving differently toward her and people turn violent, Ana must learn to stand up not only for herself but for those who cannot stand up for themselves.

LOVE
Ana was told that nosouls can’t love. But newsouls? More than anything, she wants to live and love as an equal among the citizens of Heart, but even when Sam professes his deepest feelings, it seems impossible to overcome a lifetime of rejection.

In this second book in the Incarnate trilogy, Ana discovers the truth about reincarnation and will have to find a way to embrace love and make her young life meaningful. Once again, Jodi Meadows explores the extraordinary beauty and shadowed depths of the soul in a story equal parts epic romance and captivating fantasy.

One of the things I love most about Jodi Meadows’ writing is the world building. I want to crawl right into the pages and live in there! The world she creates is incredible and magical. And it’s so unique, unlike anything I’ve ever read before.

I think my favorite part of this book was the sylph. I loved them! I kinda want one to keep. In the beginning I didn’t know what the heck was going on, because they were pretty much stalking Ana. And not attacking. It was baffling! And I must say I’m a bit jealous of her sylph-charming abilities. I found it fascinating that they flocked to music and liked to sing. I would have loved to see more sylph in this story!

I knew, as I’d always know, I was a soul asunder.

Ana was a good lead. She’s pure and innocent, naive even, yet she’s stubborn and determined. If there was something she wanted, she didn’t give up. I really felt sorry for her because of the way she was treated. She wanted so badly to fit in, to find her place in the world – but despite everything that she did for the people of Heart, she still wasn’t accepted. She was regarded with mistrust and disdain, sometimes even outright hatred. She was the outsider. And when all was said and done, that’s all the people could see her as. Their bigotry toward Newsouls was clearly from fear, but it was still disgusting. I was struck by the unfairness of it all, and it drove me crazy that they treated her so terrible when she hadn’t even done anything wrong. Nothing she did was good enough for them.

Ana and Sam faced a lot of hardship. I liked that there was conflict, because it made the relationship more realistic. Sam is sweet and kind, but there were times he was so obtuse toward Ana’s feelings that I wanted to shake him. I mean, I can see it from his side, too, in a way. But he wasn’t trying to see it from her point of view, and he should have been working toward finding a happy medium (and stop worrying about what everyone else thought). Even though it wasn’t intentional, the way he acted belittled Ana. Sure, he had a lot of experience from thousands of years of reincarnation, but Ana wasn’t a child.
It went both ways, though. They were both so freaking stubborn, and wouldn’t come right out and say things that they should have.

I hated Stef. I understand that love and jealousy can make you ugly sometimes, but ARGH. I couldn’t stand that Ana called her a friend. She was such a buttface sometimes! I wanted to slap her.

We do finally get some answers regarding the Newsouls, and find out what allows everyone to be reincarnated. And boy, was the truth shocking!
Not to mention the end…holy crap! There was a major sacrifice that had me gaping. While it didn’t make me outright cry, it did have me awfully misty. And the sylph – eep!

I really enjoyed this book, more than I enjoyed Incarnate. The only complaint I have is that I didn’t connect to the characters quite like I hoped.

My feelings were deep and overwhelming and confusing, but at the same time the emotion filled me with a sense of belonging. This boy. This soul. We were tied together with something stronger than anything physical. With him, I was not a soul asunder.