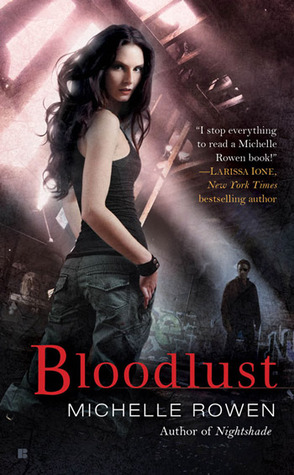 Jillian Conrad's blood has killed the vampire king. Now an enemy to all vampires, she is targeted for elimination. So is the infant daughter of the dead king. If Jillian doesn't stand in the way of her death, then everyone, living or dead, is in great peril.

Man, this book was intense. Rowen outdid herself in this one. This was an emotional rollercoaster of a read…from shock to anger to despair, I felt like I was right there with Jill at every turn. Rowen really injected you as a reader into the story in a way that surpassed the first book. There were so many times I was engrossed in this book, reading open-mouthed in awe (and exclaiming “oh shit!” out loud).
Declan’s mood swings (caused by his serum) are back in full swing, creating tension between he and Jill. Several parts you just want to slap him – one part in particular. Jill really impresses me in this book…she has a few breakdowns, but with all the shit that she goes through she somehow holds it together. Although, there is one point (actually, make that two) where she really disappoints me with her lack of faith. I mean I know she went through a lot so should expect the worst, but really Jill? REALLY? Like seriously, I didn’t even doubt for a second.
Just like the first book, there a plenty of surprises to keep you guessing – expect the unexpected with this one. My heart was in my throat the whole way with gut-wrenching twists and plenty of close calls (one in particular toward the end…I almost freaked!). I found myself unable to contain verbalization frequently with many gasps and ‘no!’s and one very large squee at the end (which will really piss you off for a second there).
I actually stayed up late to finish it because I couldn’t put it down…I have to get up for work in less than 6 hours but it’s totally worth it. All in all, this book is incredible. Never a dull moment, from start to finish – and I do believe I’ll be reading more Michelle Rowen books in the future.
I definitely recommend this book…I already want to read it again!

One response to “Review: Bloodlust by Michelle Rowen”