« Do You Continue a Series if You Hate the First Book?
Life of a Blogger: Thanksgiving »
Posted by Jessi (Geo) on November 26, 2014 | 2 Comments

A TREMBLING EARTH
The flames of civil war sweep across the Shima Imperium. With their plans to renew the Kazumitsu dynasty foiled, the Lotus Guild unleash their deadliest creation—a mechanical goliath known as the Earthcrusher, intended to unite the shattered Empire under a yoke of fear. With the Tiger Clan and their puppet Daimyo Hiro in tow, the Guild marches toward a battle for absolute dominion over the Isles.

A BROKEN REBELLION
Yukiko and Buruu are forced to take leadership of the Kagé rebellion, gathering new allies and old friends in an effort to unite the country against the chi-mongers. But the ghosts of Buruu’s past stand between them and the army they need, and Kin’s betrayal has destroyed all trust among their allies. When a new foe joins the war tearing the Imperium apart, it will be all the pair can do to muster the strength to fight, let alone win.

A FINAL BATTLE
The traitor Kin walks the halls of Guild power, his destiny only a bloody knife-stroke away. Hana and Yoshi struggle to find their place in a world now looking to them as heroes. Secret cabals within the Lotus Guild claw and struggle; one toward darkness, the other toward light. And as the earth splits asunder, as armies destroy each other for rule over an empire of lifeless ash and the final secret about blood lotus is revealed, the people of Shima will learn one last, horrifying truth.

There is nothing a mother won't do to keep her children by her side.

Gods. I don’t even know where to start.

One word to describe this book? INTENSE. There were so many scenes where I had the book in a death grip, on the edge of my seat frantically flipping pages. SHIT HAPPENS, GUYS. And it’s crazy! I also forgot how beautiful Jay’s prose was. It’s a bit on the purple side, but not in a bad way at all. It’s descriptive and flowing, painting a vivid picture of the world in your head. He has a way of captivating you, sucking you in. Yes, there were slow moments. But I never wanted to put the book down!

Um, Buruu. BURUU. *dies* Buruu is my favorite character EVER. He really is. Not just my favorite animal character, but favorite period. The only character that could tie with him is Warner. I wish I could be Yukiko so I could have Buruu for myself!! View Spoiler »But, you know, only until the last couple chapters…. « Hide Spoiler

Just like with Kinslayer, Yukiko and Buruu’s bond blew me away. It was so, so freaking beautiful! The bond between them was so deep, and it is honestly my favorite character relationship I’ve ever read. They loved each other so much, watched out for each other, believed in one another, would die for one another. SO MANY BURUU/YUKIKO FEELS. So many times that things they said to each other made me misty! I love them so freaking much!

You’ve the best heart of anyone I’ve ever met, Buruu. No matter what you did, no matter what anyone says, I’ll love you forever. Do you hear me? Forever and always.

Gods, I was so worried, Buruu.
NOTHING TO FEAR. YOU ARE MY HEART, REMEMBER? I DIE WITHOUT YOU.

I DO NOT GO TO EVERSTORM FOR TALK, YUKIKO. I GOT TO KILL OR DIE.
And you expect me to just sit here and pray?
WHO WILL BRING YOU BACK IF I FALL?
Why would I want to come back if you did?
FOOLISHNESS. YOU WILL BE A MOTHER SOON. MUCH TO LIVE FOR. MUCH TO FIGHT FOR. THIS WHOLE COUNTRY NEEDS YOU.
But I need you, Buruu. Don’t you realize I can’t do any of this without you?
I LOVE YOU, YUKIKO.
And I love you.


You’ll take me with you?
TO THE HELLS AND BACK, IF YOU BID IT.
I should tell Michi and the others. I should pack. Give me half an hour.
I WOULD GIVE YOU THE SUN AND THE MOON, YUKIKO. I WOULD GIVE YOU UNENDING JOY AND DAYS OF PEACE AND BLUE SKIES TO LAUGH AND SING BENEATH. BUT THESE ARE NOT MINE TO GIVE.
Just give me you. That’s all I need.
YOU HAVE ME. ALWAYS.

This book ripped. my. heart. out. “Book hangover” is too mild a term for what this book gave me. I’m not even kidding. (I haven’t had an ending get under my skin so badly since the series finale of Dexter!) I have never read anything so painful. (You know in Saw 2 where she has to jump into a pit of uncapped syringes and swim around in it? Yeah, it was like that. JAY KRISTOFF, YOU ARE A SADISTIC MAN.) I was yelling “NO NO NOOO” and bawling my freaking eyes out. Full on ugly cry, snot and everything. After I finished, I went back and read that scene again, and cried just as much the second time. WHY JAY, WHYYY?! HOW COULD YOU DO THAT?

How am I supposed to continue living after that? View Spoiler »HOW CAN I LIVE IN A WORLD WITH NO BURUU IN IT?! HOW?!?!! I was worried that he would die when I saw the cover – the fact that he’s flying off toward the Earthcrusher alone (even though that’s not what killed him) was NOT a good sign to me!! I don’t know if that was intentional or not. I knew what he was going to do as soon as he started on his nonsense about there being no sense in both of them dying. Never for a second did I think he was pushing the fate on Yukiko. As soon as she was knocked of his back I started yelling and crying, hoping like hell that it wasn’t going to happen. But it did. IT DID. AND LIFE CAN NEVER BE THE SAME. And here I thought Daken was the most horrible death I’ve ever read. « Hide Spoiler THAT ENDING KILLED ME. I’m dead. What you see now is just ghost Jessi, cursed to wonder the earth as only a shred of her former self. Soulless. Heartless. LIFELESS.

*coughs* In all seriousness, though, I actually sat around for the rest of the day after I finished this. I was unable to do anything else because I felt so depressed. It may sound crazy, but that’s how much this book affected me. I have NEVER had a book make me feel so much! I cried while reading this book. I cried after reading this book. I even cried writing this review (which has never, EVER happened before). I cried proofreading this review. I have PTSD. I need a therapist.

I was so traumatized I spelled Endsinger wrong. View Spoiler »I am happy that Kin survived. I honestly thought he was dead, too. With all of the other characters dying, I didn’t think there would be anyone left! And the part where we find out he didn’t actually betray Yukiko? HOLY CRAP. I didn’t even think twice when he left her, never imagined he was just playing his part! I was blown away when we found out he was still a good guy! « Hide Spoiler I freaking looooved meeting the other Arashitoras! EEEP! I loved meeting them and learning about their traditions and history. It was awesome!! I cannot recommend this series enough! A lot of people couldn’t get into Stormdancer because it starts slow. STICK WITH IT. At least til Buruu makes an appearance, trust me. You can thank me later.

There it is, Buruu. Home of my clan. Seat of Kitsune power in Shima.
IMPRESSIVE.
You think so?
…NOT REALLY, NO.
Well you’re in a lovely mood today.
I WAS TRYING TO BE POLITE.
Maybe stick to what you do best?
SARCASM IT IS, THEN.

ALL STORIES END. ALL SONGS CEASE. ALL OF US HAVE OUR ONE FRAGILE MOMENT IN THE SUN, THEN SLEEP FOREVERMORE. BUT MOST SPEND THAT MOMENT OF WARMTH IN MUTE DESPAIR, NEVER KNOWING WHAT IT IS TO LIVE A LIFE EXTRAORDINARY. NEVER KNOWING A SINGLE BREATH WHERE THEIR BLOOD WAS FIRE AND THEIR HEARTS WERE SINGING, A MOMENT THEY COULD GAZE BACK ON AND SAY IN TRUTH “THEN, IF NEVER AGAIN, I WAS ALIVE.” 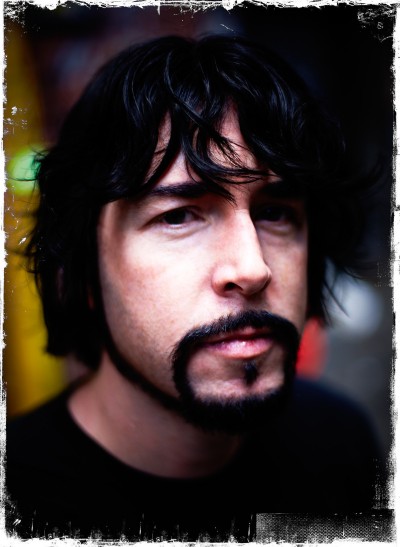 Jay Kristoff is a Perth-born, Melbourne-based author. His first trilogy, THE LOTUS WAR, was purchased in the three-way auction by US publishing houses in 2011. He is as surprised about it as you are. The first installment, STORMDANCER, is set to be published in September 2012 in the US, UK and Australia. Jay is 6’7, has approximately 13870 days to live and does not believe in happy endings.