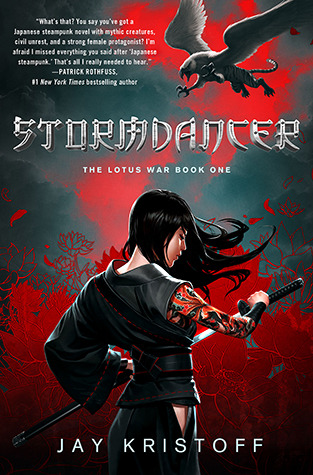 A DYING LAND
The Shima Imperium verges on the brink of environmental collapse; an island nation once rich in tradition and myth, now decimated by clockwork industrialization and the machine-worshipers of the Lotus Guild. The skies are red as blood, the land is choked with toxic pollution, and the great spirit animals that once roamed its wilds have departed forever.

AN IMPOSSIBLE QUEST
The hunters of Shima’s imperial court are charged by their Shōgun to capture a thunder tiger – a legendary creature, half-eagle, half-tiger. But any fool knows the beasts have been extinct for more than a century, and the price of failing the Shōgun is death.

A HIDDEN GIFT
Yukiko is a child of the Fox clan, possessed of a talent that if discovered, would see her executed by the Lotus Guild. Accompanying her father on the Shōgun’s hunt, she finds herself stranded: a young woman alone in Shima’s last wilderness, with only a furious, crippled thunder tiger for company. Even though she can hear his thoughts, even though she saved his life, all she knows for certain is he’d rather see her dead than help her.

But together, the pair will form an indomitable friendship, and rise to challenge the might of an empire.

I’ve been dying to get my hands on this book for months, and had to wait patiently (not) for my library to order it. Then I got it, and I was nervous to finally read it, because what if I got my hopes up too high? What if it wasn’t worth the hype? There were VERY mixed reviews on Goodreads, after all. Either love or hate, with almost nothing in between. I am extremely happy to say that I fell into the love category! Why did I ever doubt it? DON’T DOUBT IT, GUYS.

Many people complained about the slow pace and overly descriptive writing. I assure you, IT’S NOT THAT BAD. This is coming from someone who despises excessive description. I do need to warn you, though: Read over the glossary before you start the novel. It will vastly help your understanding of the world. (There’s a map, too! Bonus points, I love maps!) I admit I made one failed attempt before I had to start over fresh (you know when you read a paragraph over and over and STILL have no clue what it said because you weren’t really paying attention? Yeah, that was me for 20 pages), and the second time I was much more gung-ho about the book because I actually understood the world a bit better. Sure, it may have been a bit slow for a short period, but once Buruu came into play I was completely engrossed!

Yukiko was a good lead. Strong, fiery, and independent. But I’m afraid I didn’t connect with her overly much, because her glory was stolen. Yes, that’s right. By who, you ask? Buruu! My vast adoration for him overshadowed anything I might have felt toward Yukiko. It has been a very long time since I’ve loved any character as much as I loved the fierce and magnificent thunder tiger. He made me laugh with his pragmatic and straightforward wit. Kristoff did a fantastic job of giving him the perfect personality of a mighty beast that could easily crush a human like a mouse.

ENOUGH NOISE. STAND ASIDE. I WILL GUT HIM.
We can’t kill him like this.
AH. YOU WISH TO LET HIM STARVE, THEN. SLOW DEATH. FITTING.
No, I think we should bring him with us.
Buruu blinked, cocked his head to one side.
TO EAT?

I think the development between Yukiko and Buruu was my favorite part of Stormdancer (besides Buruu himself, of course). At first it’s hatred, and they’re forced into an uneasy alliance, but Yukiko earned his grudging respect and the bond they forged was incredible and powerful.

The minor characters were done well, too, and felt incredibly real. Their depth was stunning! I love when an author can pull me into their story enough to feel hatred for a character (Shogun Yoritomo), and there were many times I didn’t know who to trust.

Let’s take a moment to gush over my favorite arashitora (okay, the only one). I FREAKING ADORE BURUU. Can I please be a Stormdancer so I can ride my own thunder tiger? Please?? Okay, so not just any thunder tiger. I just want Buruu. Because he was so awesome! I am blinded by the shining glory of Buruu!!! Ahem. I’m going to stop the crazed fangirling now. ^.^

Kristoff’s writing is beautiful and captivating, his world painted vividly in the reader’s mind with flowing and descriptive prose. The book was very engaging, too – in fact, I was emotionally invested enough to cry (only a handful of books have done that). I knew I was in for heartbreak at the end of the book, and I even though I saw the loss coming, I still cried. Mr. Kristoff, you broke my heart! I can’t wait to see what happens next in the series, and can’t wait for more Buruu!

Favorite character: Who do you think? BURUU. Duhh. Did I mention I adore him? (Yes, repeatedly, I know. Shush.) I want him! ♥

I DO NOT LIKE HIM.
Are you jealous?
HE TALKS TOO MUCH. SCREECHING HURTS MY EARS. HIS VOICE SOUNDS LIKE RUTTING MONKEYS. AND HE IS THIN. PASTY.
You are jealous!
FOOLISHNESS. I AM ARASHITORA. HE IS HUMAN. WEAK. PUNY.

She felt steel in him, folded and sharp, light rippling across the surface and glinting on his edge. He flooded her with it, tempered and hard, a resolve forged in lightning and thunder and cooled by the pounding rain. He was strong, so they were strong.
I AM YOUR BROTHER NOW.

“There is nothing you could do that would repel me, Lady.”
Yukiko could barely hear his voice over the sound of her heart pounding in her chest.
RAIJIN, TAKE ME NOW.
She shot Buruu a withering glance as he rolled over on his back and pawed at the sky.
HAVE MERCY ON ME, FATHER. TAKE MY WINGS. CHAIN ME TO STINKING EARTH. BUT THIS TOTURE I CANNOT ENDURE.

DYING IS EASY. ANYONE CAN THROW THEMSELVES ONTO THE PYRE AND REST A HAPPY MARTYR. ENDURING THE SUFFERING THAT COMES WITH SACRIFICE IS THE REAL TEST.