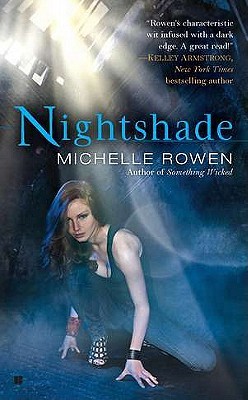 Jillian Conrad never believed in vampires-until she was unwillingly injected with a serum that was supposed to act as a deadly poison to them. Now, tormented half-vampire Declan Reese wants her blood to destroy the undead kingdom. Unfortunately, the serum has also made her blood irresistible to all vampires-including Declan, whose desire for Jillian is more than mere hunger.

I have been looking forward to reading this book ever since I laid eyes on it, so I had pretty high expectations. And thankfully, it didn’t disappoint. It certainly wasn’t a slow start (which appealed to me, because I get bored easily), with Jill getting stabbed with a syringe and injected with Nightshade, vampire poison.
I loved the development between Jill and and her kidnapper, Dec…the way it turns into Stockholm Syndrome also appeals to me because I really like romances that start with both parties hating each other (I have no know why). As things heated up between Dec and Jill, I found myself taking a liking to him…although I did find his mood swings in the beginning very irritating.
The book had plenty of action at every turn and there were a few twists involved too…finding out identities and the roles they play, and also finding out that things that seemed true were actually a lie. I like to be surprised from time to time and this book was filled with secrets.
And speaking of surprises, the ending…wow!
While it’s not necessarily on my favorites list, I did really like Nightshade. Definitely a dark and sexy thrill ride!
Moving straight on to book 2 :)