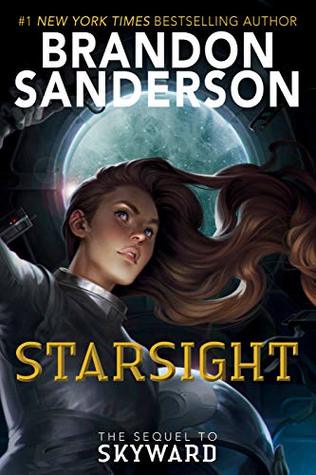 All her life, Spensa's dreamed of becoming a pilot. Of proving she's a hero like her father. She made it to the sky, but the truths she learned about her father were crushing. The rumors of his cowardice are true—he deserted his flight during battle against the Krell. Worse, though, he turned against his team and attacked them.

Spensa is sure that there's more to the story. And she's sure that whatever happened to her father in his starship could happen to her. When she made it outside the protective shell of her planet, she heard the stars—and it was terrifying. Everything Spensa has been taught about her world is a lie.

But Spensa also discovered a few other things about herself—and she'll travel to the end of the galaxy to save humankind if she needs to.

Holy crap, no second book syndrome here! It’s very rare that I love a sequel almost as much as the first book, but this one really delivered. I highly suggest reading this book BEFORE reading my review – going in, you know basically nothing about the plot because the synopsis doesn’t give you much. It’s so hard to talk about this book without giving anything away! So if you want to go in blind and be surprised like I was (which I definitely think is the best way to experience this book), skip this review until after you’ve read the book.

I loved learning more about Spensa’s cytonic abilities and the world in general! This book is very different from the first, because Spensa spends most of it off-planet, on Starsight. I was actually not expecting the turn this one took at all, but I liked it a lot!

I enjoyed meeting all of the new characters and species in this one! Diones, Figments, and I especially liked Hesho and the kitsen, or tiny fox people. I thought Morriumur and their species (the Diones) were extremely fascinating and original! The world building altogether was amazing and you could tell Sanderson spent a lot of time on it. The world and all of the alien species were so fleshed out! And the best thing about them, was that they were entirely plausible. Some of them aren’t anywhere close to human, and things get pretty weird and fantastical. But because it’s aliens, it’s completely believable. They have different social cues, different culture, and sometimes different methods of reproduction. It was all extraordinarily imaginative and unique, yet still realistic. Also, the delvers were terrifying but extremely intriguing. Such an awesome concept!

The twist on hyperdrives was fantastic! View Spoiler »I had this dawning feeling, like I knew something big but couldn’t quite grasp it (I love that Sanderson can give you that feeling!) – I knew Doomslug was important, but I never guessed that her species actually WAS the hyperdrives! Oh my goodness! « Hide Spoiler There were plenty of surprises, it definitely kept me on my toes!

“That’s what war is,” Cobb told me. “A bunch of sorry, desperate fools on both sides, just trying to stay alive. That’s the part that those stories you love leave out, isn’t it? It’s always more convenient when you can fight a dragon. Something you don’t have to worry you’ll start caring about.”

I love that this book brought to question the morality of war. Once Spensa spent time with her “enemies,” she started to realize that they were people too. And despite being alien, they were just as human as she was. They had lives, they loved, and not all of them were bad. They were just trying to survive. She saw things from the other side. She thought they were monsters, but they thought the same about her species. Monster can be a subjective term. It was very interesting!

That cliffhanger though!!! I neeeeed book 3!

I alternated between reading and listening as my schedule allowed – I had listened to the audio of Skyward for my re-read and I absolutely LOVED Suzy Jackson! So I bought the audio for this. She’s absolutely fantastic, I highly recommend the audio of both books! I love that she has different voices for everyone she narrates, and I adored M-Bot even more in narration. She did a great job on him!

“All right, M-Bot,” I said. “We have a problem. We might need to hijack that entire carrier ship.”
“Excellent,” M-Bot said. “Would you like your corpse cremated or ejected into space?”

“You get cranky if you don’t sleep.”
“No I don’t.”
“Do you mind if I record your tone for later, to use as evidence against you in a future disagreement?”
Lmao, I love M-Bot so much!