« ARC Review: The Other Side of the Sky by Amie Kaufman & Meagan Spooner
Review: The Kingdom by Jess Rothenberg »
Posted by Jessi (Geo) on September 4, 2020 | 0 Comments 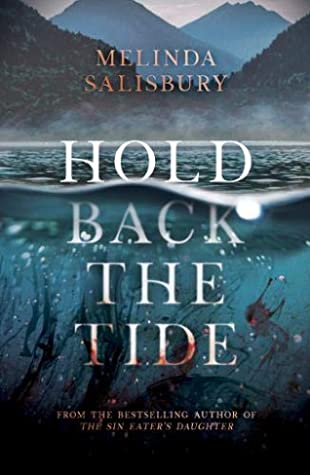 Hold Back the Tide by Melinda Salisbury
Published by Scholastic Press (3.5.2020)
Genres: Horror, Young Adult
Format: Paperback, 297 pages
Source: I own it

Here are the rules of living with a murderer.

One: Do not draw attention to yourself.

Of course, when you live with a murderer, this is impossible. Even the subtlest of spectres is bound to be noticed. Which leads to the next rule.

Two: If you can't be invisible, be useful.

Everyone in this quiet lakeside community knows that Alva's father killed her mother, all those years ago. There wasn't enough proof to arrest him, though, and with no other family, Alva's been forced to live with her mother's murderer, doing her best to survive until she can earn enough money to run away.

One of her chores is to monitor water levels in the loch-a task her father takes very seriously. Their family has been the guardian of the loch for generations. It's a cold, lonely task, and a few times, Alva can swear she feels someone watching her.

But the more Alva investigates, the more she realizes that the truth can be more monstrous than lies, and that you can never escape your past . . .

Wow. I don’t really know what I expected going in. I saw Cait’s (@paperfury) review where she said “this book softly held my hand, lead me to the edge of a cliff, and then shoved me straight on off” and went and bought it instantly. I didn’t even really know what genre it was – the synopsis is very vague, so I thought it was a contemporary pushing thriller with maybe some possible paranormal elements. What I got was NOTHING like what I expected!

And I think that made me enjoy it more! I had NO clue what I was in for. I don’t even want to say much about it because I think everyone should go into this book blind like I did. I feel like that’s how it’s supposed to be enjoyed – as a mystery.

But what I will say is that this book grabbed me from the very first page and didn’t let go! It’s a little slow to start after the first chapter captures you, but Salisbury’s prose is enough to keep you engaged until things start happening. And when said things start, there’s no turning back! This book was delightfully creepy. I actually kind of  wish I’d read it for Halloween. The atmosphere that Salisbury creates is fantastic!

View Spoiler »So, I was NOT expecting any true paranormal elements. *Maybe* a ghost or something, but I sure as shit was not expecting legit monsters (which are basically vampires). It was SO CREEPY! It had a hardcore Stranger Things meets A Quiet Place vibes. I also LOVED the Scottish lore and setting. Melissa really brought that to life!

The book was a tad predictable for me, but it didn’t ruin my enjoyment of it at all. I figured from the get go that the story about her dad killing her mom had more to it than that, and suspected that he didn’t actually kill her at all. As soon as the monsters were revealed, I knew. I had also started to suspect that the creatures were once human (her mom showing up didn’t come as a surprise sadly), but I didn’t know the how or why until the monsters were described as vampiric in nature. So cool! « Hide Spoiler

Did I mention how creepy it was?! It’s not scary – or at least not to me, I don’t get scared by books – but it’s definitely disturbing and gripping. There were plenty of moments where I was gobbling pages up, wide-eyed and on the edge of my seat. It’s SO INTENSE!

And THAT ENDING!! I confess that I didn’t cry. Which brings me to the reason that this book doesn’t get a full 5 stars from me – I didn’t quite connect to the characters as much as I’d hoped. There were a couple of scenes that probably should have made me shed a tear and I just didn’t feel that emotion. The ending probably should have had me sobbing, honestly, and it didn’t. So despite how engrossed I was, the emotional attachment was missing for me. Which makes me sad, because I love brutal stuff and realistic endings that don’t have a perfect happy ever after. This book is DARK. Expect dark going in, because Cait was not wrong when she said it will shove you off a cliff. Definitely recommend!