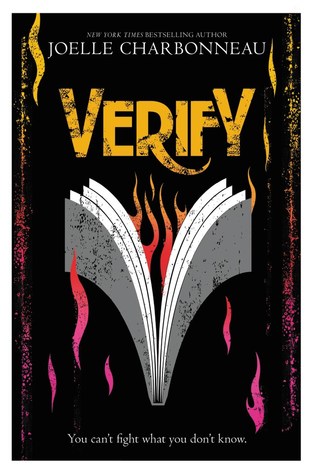 Meri Beckley lives in a world without lies. When she turns on the news, she hears only the facts. When she swipes the pages of her online textbooks, she reads only the truth. When she looks at the peaceful Chicago streets, she feels the pride everyone in the country feels about the era of unprecedented hope and prosperity over which the government presides.

But when Meri’s mother is killed, Meri suddenly has questions that no one else seems to be asking. And when she tries to uncover her mother’s state of mind in her last weeks, she finds herself drawn into a secret world full of facts she’s never heard and a history she didn’t know existed.

Suddenly, Meri is faced with a choice between accepting the “truth” she has been taught or embracing a world the government doesn’t want anyone to see—a world where words have the power to change the course of a country, and the wrong word can get Meri killed.

In a time of universal deceit, telling the truth is a revolutionary act.

I have some pretty mixed feelings about this book, but overall I feel pretty meh about it. Which makes it hard to review.

The concept was fairly awesome. And kinda scary, really: In the future, there are no physical books or written words (they’re not banned, but people get paid to turn in paper and there’s a tax for using it, so they’re super rare) – basically everything is digital. Which leaves the government to control what people see. Certain words/events have been completely erased from all history. A government controlled future is a super scary concept – especially one where people believe everything they’re told like sheep. So I definitely thought that part was cool!

Sadly, that’s where it ended. The concept was cool, sure, but the delivery was seriously lacking. The world building was shit to be honest. The world is not set up at ALL in the beginning – until things started happening that actually related to the dystopian aspect, it read like a contemporary set in today’s world. There’s also no explanation for anything whatsoever. What year is it? How is there no crime? How did this future come to be? Your guess is as good as mine. There’s little to no back story. It was disappointing, really. In the beginning I didn’t even realize that everything was digital because you’re just thrown into it and expected to catch up. I really would have liked to see a better foundation for this futuristic world. SUPER lazy writing, in my opinion.

And, as intriguing as the concept is, you kind of have to suspend belief to get into it. How could words and entire histories be completely erased from existence? That also goes along with not having a year for reference – it would take a long time to go beyond memory for a lot of the things that no longer exist on record.

I also didn’t particularly like or care about the characters, so I couldn’t connect to the story. The romance was lacking and made me feel exactly nothing, and even the main characters were uninspiring. I liked the writing style well enough – a bit dry (NO contractions like why??), but not boring. Thankfully the pacing is fast enough that I didn’t get bored despite my lack of connection. Overall, this book is forgettable. I already don’t remember the side characters other than having ridiculous names (they’re all named after items in a library, so we ended up with stupid shit like Spine, Stacks and Flap wtf).

Admittedly, this book did have some great lines in it! (Although, at the rate they were quoting stuff about truth from other people, maybe none of it was original *shrugs*)

“Words have power. They change minds. They inspire and create fear. Words shape ideas – they shape our world – and the words down here will someday be the ammunition we need to change it all back.”

“For years you have guarded the embers of truth, and now it is time to stoke them into a fire that cannot be extinguished.”