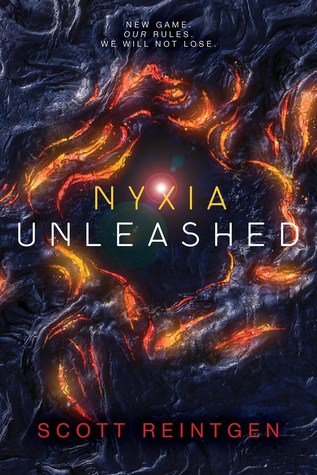 Emmett Atwater thought Babel’s game sounded easy. Get points. Get paid. Go home. But it didn’t take long for him to learn that Babel’s competition was full of broken promises, none darker or more damaging than the last one.

Now Emmett and the rest of the Genesis survivors must rally and forge their own path through a new world. Their mission from Babel is simple: extract nyxia, the most valuable material in the universe, and play nice with the indigenous Adamite population.

But Emmett and the others quickly realize they are caught between two powerful forces—Babel and the Adamites—with clashing desires. Will the Genesis team make it out alive before it’s too late?

We’re weapons. They made us this way. And we’re coming for them.

I daresay I enjoyed this one even more than the first! This is such a great sci-fi series.

I loved the world of Magnia/Glacia with its two moons and the way the shift in moons dictated the name of the planet. So cool! The culture of the Imago and all of the creatures on the planet was awesome!

The best part of this series is hands down the diversity of the cast of characters. I love how Scott handles all of the cultural barriers and brings together this fabulous band of misfits! They’ve all had a rough past, but find family amongst themselves. Squad goals!!

We survive together. Shoulder to shoulder.

I loved the sense of family that the team had. Even though they had their differences, they had each other’s backs no matter what. And I loved the beautiful relationship that Emmett and Morning shared! Also, Emmett is such a great lead. He comes from a rough background and has faced hardship, which makes him so much more empathetic. I loved that he stood up for Axis and the Imago in the outer rings. He does what he has to in order to survive but deep down he is a genuinely good person.

If you haven’t read this series yet, you are missing out!