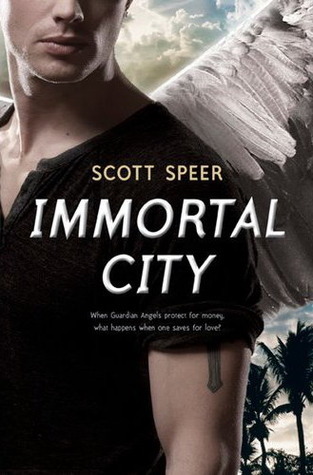 He's days away from becoming a full Guardian, and people around the world are already competing for the chance to be watched over by him. Everyone's obsessed with the Angels and the lucky people they protect - everyone except for Madison Montgomery.

Maddy's the one girl in Angel City who doesn't breathlessly follow the Angels on TV and gossip blogs. When she meets Jackson, she doesn't recognize him. But Jackson is instantly captivated by her, and against all odds the two fall in love.

Maddy is swiftly caught up in Jackson's scene, a world of glamour, paparazzi - and murder. A serial killer is on the loose, leaving dead Angels' wings for the police to find on the Walk of Fame. Even the Guardians are powerless to protect themselves in the face of this threat & and this time it's up to Maddy to save Jackson.

I’ve read a few angel books before, but for the most part I’m not really a big fan of them (I did enjoy Hush, Hush, but the series went downhill fast). So, I was VERY surprised by how much I enjoyed this one!

First of all, the concept was awesome and unique, making this book completely different from any other angel book out there. Instead of being the typical selfless angels, the guardian angels are paid for their services. Crazy, right? Angels in Immortal City are famous and revered, and everything is all about them. All of the places and things are named after them: SaveTube (angel’s YouTube), Walk of Angels (with angel handprints), Angel City High, Angel News Network, and tons of angel souvenirs. It was all about wealth and power. Like I said, SO different from your typical angel story!

I loved the dark undercurrent and hint of mystery that this story had. I totally didn’t figure it out! It kept me guessing throughout the entire story, and I love that. It’s refreshing for the ending of a book to not be predictable!

I liked Maddy and Jackson a lot, and loved the interactions between them. Their relationship was an unlikely one (you know I love those!), and I like that it developed slowly enough for them to get to know each other. View Spoiler »The revelation of Maddy being half angel was very predictable and a little on the cliche side, but I liked it anyway! « Hide Spoiler

I loved the ending, too! View Spoiler »For a minute there, I thought Maddy was going to die for real! I forgot about the whole “only and angel can kill an angel” bit. I may have shed a tear…especially when Jacks told her she was his Guardian Angel. Squee! « Hide Spoiler I was pleasantly surprised by this book and I would definitely recommend it, even if you’re not a fan of angels (because I’m not either!). I went out and bought the second book after finishing this one. I have yet to read it (*hangs head in shame*), but I can’t wait to see what happens in the next installment!