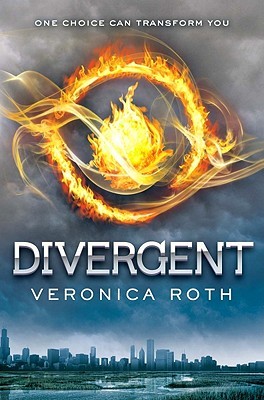 In Beatrice Prior's dystopian Chicago, society is divided into five factions, each dedicated to the cultivation of a particular virtue—Candor (the honest), Abnegation (the selfless), Dauntless (the brave), Amity (the peaceful), and Erudite (the intelligent). On an appointed day of every year, all sixteen-year-olds must select the faction to which they will devote the rest of their lives. For Beatrice, the decision is between staying with her family and being who she really is—she can't have both. So she makes a choice that surprises everyone, including herself.

During the highly competitive initiation that follows, Beatrice renames herself Tris and struggles to determine who her friends really are—and where, exactly, a romance with a sometimes fascinating, sometimes infuriating boy fits into the life she's chosen. But Tris also has a secret, one she's kept hidden from everyone because she's been warned it can mean death. And as she discovers a growing conflict that threatens to unravel her seemingly perfect society, she also learns that her secret might help her save those she loves . . . or it might destroy her.

This is not the first time I’ve read this book; I read it back in 2011 when it first came out. I liked it the first time, but it didn’t wow me. I probably would have given it 3-3.5 stars. That was before I started blogging, and I remembered next to nothing, so it was almost like reading it for the first time again. I was never really on the Divergent bandwagon with all of the crazed fans, but with the movie coming out, I was dying to re-read it. I think I enjoyed it a lot more the second time around because I was more gung-ho about it!

I love love loooove the idea of this book. It’s such an original concept! I love the factions and what they represent, and how they each have their own type and style. The separation between the factions is kind of like racism, though. They judge each other for choosing to be a certain way (i.e. to the Dauntless, Abnegation members are ‘stiffs’). Which is kind of ironic, since the point of splitting the population into factions is to create harmony and eradicate the bad qualities. It just goes to show that no matter what, humans will be ugly.

“Human beings as a whole cannot be good for long before the bad creeps back in and poisons us again.”

I would have liked to see a tad more world building, though. What year is it? How did the division into factions come about exactly? Did the government just up and one day say, Okay guys, we need to separate into factions because what we’re doing now just isn’t working? I need more!! World building whore here, haha.

I also didn’t care much for the prose. It was kind of sophomoric at times, and rather dry to me. Thankfully the plot and premise were interesting enough to keep the pace moving! I had trouble feeling much emotion while reading, even in a major part at the end where I should have been crying. View Spoiler »So I kind of got spoiled for this, because last week I was reading something Divergent related and they said something about Tris’s parents dying, so I knew it was going to happen. Maybe that took some of the surprise away because I was already anticipating it. But I felt practically nothing when her parents were killed. Usually parts like that really get to me because I’m so family oriented and am very close to my own parents. But nope. I should have been bawling and I didn’t shed a single tear. « Hide Spoiler

I do have to say that Tris was a great lead! She is human, but she’s strong. She makes mistakes, but she tries her best to do the right thing. She stands up for her friends. She protects her family. Four was alright. He was stoic, and sometimes I couldn’t get a read on him. The romance moved nice and slow, but sometimes it was hard to tell where they stood with each other because Four was so reserved.

I can’t wait to see this book come to life on the big screen!!

“I’m used to just saying whatever is on my mind. Mom used to say that politeness is deception in pretty packaging.”

I believe in ordinary acts of bravery, in the courage that drives one person to stand up for another.