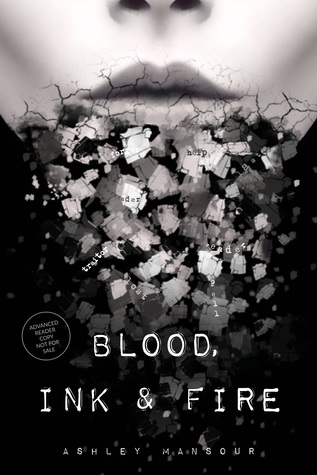 These are the banal images fed to Noelle Hartley to comfort her, to prepare her. To keep her feeling vulnerable.

Welcome to the future inside the United Vales of Fell, a world where books have been eliminated and reading has been replaced by watching Fell’s ever-present stream of information, Verity. Where others see images, Noelle sees words. Lots of them. She’s obsessed with what they mean, where they came from and why they found her.

Noelle’s been keeping her forbidden words a secret; but on the night before her seventeenth birthday, a rare interruption in the stream sets them loose, leading Noelle to discover a mysterious volume linked to an underworld of rebel book lovers known as The Nine of the Rising. With the help of the Risers, Noelle realizes that the words are precious clues to the earlier time, and as a child of their bookless age, she might just be the very last reader.

I think this book had fabulous potential. The idea of it all was epic – in the future, books and reading are forbidden. How scary is that? I think Ashley Mansour was really onto something great here, because it speaks to the heart of every single one of us readers. A world without books is the worst kind of world we could possibly imagine! The concept really was brilliant. But there were a lot of issues I had with it that kept me from enjoying it as much as I’d hoped.

I wasn’t really sold on the romance between Noelle and Ledger. Not to mention the almost love triangle was completely unnecessary. It didn’t add anything to the plot and was just plain annoying in my opinion. View Spoiler »And it was almost kind of a love square, I think? Because Noelle liked John, then John died and turned into Ledger and she fell for him, then the little thing with Mac. UGH. « Hide Spoiler

I didn’t particularly care about any of the characters. I did kind of like Ledger, though. He was the only one that stood out for me. I couldn’t connect to Noelle, I’m afraid. I also had little to no feeling at all throughout the book. My emotions were just blank, and I didn’t connect to the story or the characters much at all.

The pacing was VERY slow. I was bored for most of the book, and there were times that I was actually struggling. The prose was a bit erratic – it was rather dry; at times it was dull but then it also had some really beautiful flowing moments. I think Ashley Mansour has great potential as a writer, though!

The world building was confusing at times, so I had trouble grasping most of it. I couldn’t really picture the bioslice, and I never really grasped the terms Slack (obviously a negative thing), or Vale (this is where they lived, and I don’t think it was like the true meaning of that word, since there were different ones that were numbered – but I would have liked a better explanation of that society because I never really got a feel for how they lived). There were a few places that were a straight info dump, and I was left struggling to keep up with it. It made my brain hurt. Also, they called book lovers “Boolos.” Um…

View Spoiler »And what the hell is Ledger? That part had a very strong 5th Wave feel because he reminded me of Evan.
Is he an alien? Despite this book being a sci-fi, that seemed like that was out of left field. There was nothing really paranormal about this book except for that. Everything else was based on technology and science. I think the paranormal aspect of Ledger took away the credibility of the story. It didn’t fit with the dystopian feel of the book. « Hide Spoiler


Despite the fabulous concept and unique world, this book fell flat for me and I don’t think it’s one that will stick with me. I do want to give Ashley’s future work a try, because I can definitely see the potential this book had and the potential she has as a writer.

“Just remember, they can never erase what you are. They cannot take what you refuse to give.”

My ocean is deep and getting deeper every day. Whatever is lurking beneath me in that dark sea, I’m sure I can feel it rising.

We are dreamers who dream outside of sleep. And we do it impossibly, dangerously well. We are readers.

5 responses to “Review: Blood, Ink and Fire by Ashley Mansour”