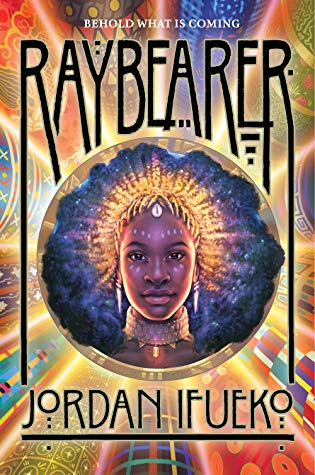 Nothing is more important than loyalty.
But what if you’ve sworn to protect the one you were born to destroy?

Tarisai has always longed for the warmth of a family. She was raised in isolation by a mysterious, often absent mother known only as The Lady. The Lady sends her to the capital of the global empire of Aritsar to compete with other children to be chosen as one of the Crown Prince’s Council of 11. If she’s picked, she’ll be joined with the other Council members through the Ray, a bond deeper than blood.

That closeness is irresistible to Tarisai, who has always wanted to belong somewhere. But The Lady has other ideas, including a magical wish that Tarisai is compelled to obey: Kill the Crown Prince once she gains his trust. Tarisai won’t stand by and become someone’s pawn—but is she strong enough to choose a different path for herself?

What a beautiful debut!! The world of Aritsar as well as Ifueko’s prose were stunning and vivid. I loved the culture! It felt a lot like a mashup of Children of Blood & Bone and City of Brass, but was everything I wanted from both of those books (and didn’t get). This was the gorgeous Nigerian fantasy that I expected jumping into CoB&B, which left me feeling disappointing. This one did not!

I was utterly hooked from the first chapter! It was so magical and enchanting it drew me in. I loved the world and its magic – the alagbato (fairies), abiku (death spirits), ehru (enslaved spirits), the sprites, and the concept of Redemptor children that have to enter the Underworld to keep the abiku at bay. I especially loved the emi-ehran (spirits of the underworld)! I freaking LOVED Hyung, Woo In’s giant cat emi-ehran!

The concept of the Ray was phenomenal! So basically, to unite the different peoples, the emperor – a Raybearer – chooses 11 other council members to help him rule equally by bonding mentally with them using the Ray. But they have to love him for the Ray to work. Each emperor is born with one natural immunity (i.e. poison, or burning) but when he anoints his council members after bonding with the Ray, each member lends another immunity until the emperor is completely immune to all forms of death except old age! Epic, right?! It’s unlike anything I’ve ever read before!

I can’t praise the world building enough. It was vivid and captivating – I never once forgot about the surroundings and was able to picture it completely in my head. The culture positively saturated this story! You could tell that Ifueko spent a long time on the world building – there was a very detailed culture, history, and politics to the world. There’s even a glossary in the back!! I would have loved to see a map though, hopefully there’s one in the finished copy. I adored the backstory, and how there were scandals and coverups involving the history. View Spoiler »I LOVE that women actually can have the Ray, and there used to be two rulers, an empress and an emperor, ruling side by side! It was a nice little twist that Tarisai had the Ray, as did her mother – who got banished for it. I didn’t see that coming!! « Hide Spoiler I love when history has been twisted and covered up, and we get to take that journey to discovering the real backstory. LOVE. (All the Stars and Teeth is another good story like that!)

Tarisai was fantastic! It was easy to feel for her. She grew up without the love of her own mother, being used as a tool, not even deserving of being called by her real name. Her mother called her Made-of-Me and never called her by her real name, poor thing! She also didn’t have a choice in her life with her mother’s third wish ruling her future. View Spoiler »I like how that all played out too, and how she overcame it in the end! I also like how she sacrificed herself to save the Songland children from being Redemptors. I can’t wait to see where this goes in the next installment when she has to fulfill her promise to the abiku and go to the Underworld in place of the children! « Hide Spoiler

The romance was sweet, and I liked Sanjeet, but it didn’t quite give me the feels I was hoping for. It felt like they were lacking some sort of chemistry that would make it click for me – the sort of chemistry that the friendships in the book had. The two main friendships – Dayo and Tar, and Tar and Kirah – were absolutely beautiful! I don’t know why I didn’t feel the same way about the romance. (I mean, ya’ll know I don’t care that much about romance, but still.) I loved Kirah!! She was such a great sidekick, and a wonderful best friend for Tarisai. She stood by her no matter what and protected her. I adore good wholesome female friendships that aren’t catty! I also adore wholesome, strictly platonic friendships; and Dayo and Tar were a perfect example of that. That kind of strong boy/girl friendship is not something we see very often in YA fiction, and something I really wish we did! There was nothing romantic whatsoever between them (think Harry + Hermione!), and I freaking loved that. Even the few times they considered it (mainly out of expectation), they were like Nah, that’s too weird, I just don’t like you that way. SO. RARE.

All in all, this book was gorgeous. I highly recommend this magical Nigerian fantasy!

“You write your story, not the people who came before you.”

We were griots in a pantomime, forced to sing every line in this grim story, dancing to a beat my mother drummed.

Monsters were nothing. The true terrors were people like me – the ones who saw suffering, who heard the screams of a hundred generations echoing for miles around them – and still did nothing.