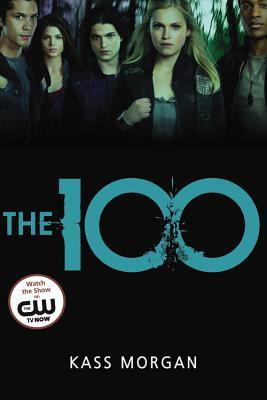 Ever since a devastating nuclear war, humanity has lived on spaceships far above Earth's radioactive surface. Now, one hundred juvenile delinquents -- considered expendable by society -- are being sent on a dangerous mission: to recolonize the planet. It could be their second chance at life...or it could be a suicide mission.

CLARKE was arrested for treason, though she's haunted by the memory of what she really did. WELLS, the chancellor's son, came to Earth for the girl he loves -- but will she ever forgive him? Reckless BELLAMY fought his way onto the transport pod to protect his sister, the other half of the only pair of siblings in the universe. And GLASS managed to escape back onto the ship, only to find that life there is just as dangerous as she feared it would be on Earth.

Confronted with a savage land and haunted by secrets from their pasts, the hundred must fight to survive. They were never meant to be heroes, but they may be mankind's last hope.

I’m going to be honest, I was afraid to even pick this book up. The reviews for it are horrific. I don’t think I’d seen one good review out there. But, I saw everyone raving about the TV show, and I couldn’t watch it without at least giving the book a chance first (*coughs* because I would never, ever read the book after watching it). Now, unfortunately, I see why people don’t like it.

Don’t get me wrong, it wasn’t terrible, necessarily. It just wasn’t very good, either. The words were like mindless drivel; pretty much nothing happened in this whole book. There’s people, more people, they’re doing people things, then BAM they’re on Earth, some shit gets stolen, someone gets in trouble, there’s some kissing and romance, then it ends. That’s it.

I did kind of like the idea of it, I guess? Earth isn’t particularly inhabitable anymore (or at least they don’t think it is?), and a bunch of bad kids get sent there for human trials to re-inhabit the planet. Mkay, I can go with that. I also liked that each story was tied in somehow because all of the characters’ lives were connected.

However, the world building was awful. Are they on a ship? They kept talking about Walden, Phoenix, and Arcadia, but are they names of ships? Wings of the same ship? Planets? There was mention of accents and different clothing and hairstyles, but I never really understood why. Nothing was really described or explained. There was a brief mention of bombs and Earth being uninhabitable, but that’s it. What happened? When?!

There were also waaaay too many characters. I couldn’t keep them all straight! They all blended together into one mass of people. With the changing POVs, I struggled to keep up with who I was reading. I kept getting them mixed up, which was very confusing. They didn’t stand out at all, and I couldn’t connect to any of them. None of them had much personality to speak of (if any at all).

Now that I got that out of the way, I am super excited to see the show so I can finally find out what all the fuss is about!