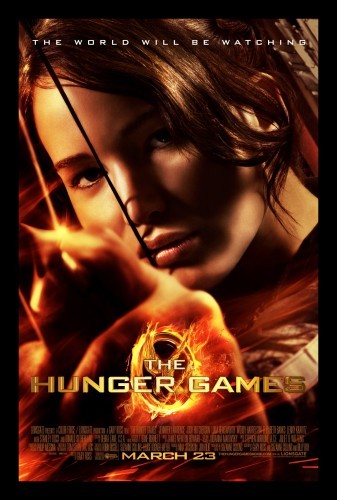 Set in a future where the Capitol selects a boy and girl from the twelve districts to fight to the death on live television, Katniss Everdeen volunteers to take her younger sister’s place for the latest match.

**CAUTION: SPOILERS!! If you have not seen the movie or read the book yet, I wouldn’t suggest reading this because it is an in-depth discussion and is full of spoilers for both the book and movie.**
All in all I think they did a great job, but after the ending I walked away feeling rather disappointed. There were SO many changes, but I understand that they had to squeeze a 400 page book into a couple hours so a lot of it was acceptable. There were, however, a few that didn’t sit well with me. I’ll get to that in a minute.

In the half before the arena, I barely noticed the changes. Almost all of the dialogue was different, but it still worked. They added some banter between Effie and Haymitch that I really enjoyed. The Reaping was intense!! I really liked Snow’s video clip of the Uprising even though it skipped the part about District 13 being destroyed. I was too engrossed in the movie at the beginning to really pay attention to the details that were different.  In the time leading up to the Games, the only thing that bothered me was that Katniss got the Mockingjay pin from Greasy Sae – who wasn’t even introduced – rather than Madge, who didn’t have a part at all. Other than that, the only things that I really noted were Haymitch’s entrance being late (didn’t show up at the Reaping but on the train) and Katniss singing in the beginning. She hasn’t sang since her father died, which really made the impact of her singing for Rue more significant. And Buttercup is black and white?? What? I pictured him as a scraggly orange tabby. But whatever works, I guess. The only part he had was hissing at Katniss, which I found to be a bit disappointing…he was one of my favorite characters, after all. ^.^

That stuff didn’t really bother me much though, and the way the Capitol and it’s citizens were portrayed was freaking awesome. It played up the flamboyant nature of Capitol dwellers. The pink Afghans – lawl!! The hairdos and dress was crazy and absurd, and everything was shockingly bright. It was perfect! The Capitol itself looked great, the living spaces and arenas were magnificent, and all in all the world building visuals were beautifully done. The chariot scene was pretty sweet, too.

Here’s where it started getting sketchy for me. The first thing that bothered me was that the relationship between Katniss and Cinna was borderline creepy, almost hinting at some underlying romance. Almost. For us Collins fanatics who know the book, we know their relationship. But it didn’t have enough time to culminate in the movie, so people who didn’t read the book might not understand (like my boyfriend). But, I loved Lenny Kravitz as Cinna. He was amazing! And Stanley Tucci was perfect for the role as goofy Caesar.
The problem now? No Venia, Octavia, or Flavius. I got a glimpse of what I assumed to be Flavius, but none of their names were mentioned. Neither was Portia’s, even though she had several parts. The only reason I even knew it was her was from the cast and crew photos. The red-headed Avox girl didn’t make an appearance either.

While the Capitol scenes were my favorite, I don’t think the time was used very wisely. The time in the arena could have used more run time. It ended up feeling like a rushed, condensed version. Yes, I realize that indeed it was, but I feel the time spent at the Capitol shouldn’t have gotten so much of a spotlight. Plus there was WAY too much silence, which were reflective moments for Katniss – but again, if you don’t know what she’s thinking from the book, it just seems like awkward pauses. Those could have been eliminated for more explaining.

Again, most of the changes were small with the arena as well. The Cornucopia didn’t fit the picture in my head (gold horn with ridges) and just looked downright weird, Haymitch sent notes with the parachutes to Katniss (although I understand that one because we can’t read her thoughts), it hinted at the mutts killing Thresh rather than Cato, the leaves that Rue used weren’t explained, and her death was a bit different (but everyone still cried!). Those things were noticeable but didn’t diminish the value of the film.
The things that did were certain missing parts that I feel were needed:
1) The comparison of Rue and Prim by Katniss and that was why she was so fond of her. That was another relationship that was rushed, so you didn’t get quite the attachment to Rue as in the book.
2) No bread from District 11 was sent as a thank-you. But they did compensate for that by showing the whole district salute Katniss. That part gave me chills! Followed by an Uprising, which wasn’t until book 2 but was smoothly inserted into the movie.
3) The sleep syrup. It wasn’t really important necessarily, but it still irked me. I really wanted to see that part for some reason.
4) The muttations being the former Tributes. I didn’t care for what the way they did the mutts. They looked awful, for one – like a giant bulldog – and they were all the same color. No people eyes and hair colors or numbered collars. It seemed to lessen the horrifying nature of the Capitol by excluding that part (and the Avox girl). I think the movie made the Capitol and President Snow seem too…nice.
And 5) The biggest and most major one of all – the Mockingjay. It is the symbol of the whole series, yet the explanation of how they came to be was omitted. Therefore, the Mockingjay means nothing to the non-bookish people. The symbolism of rebellion was lost. I didn’t like that at all.

The last fight scene was what brought the movie down for me. The severity of the final battle was diminished because they weren’t practically dead coming out of it. Peeta didn’t lose his leg! It just made it seem too easy to defeat Cato. Which, by the way – perfect actor for him!
Then they got home, and although Haymitch tells Katniss about the trouble with her rebellion, nothing is said in front of  Peeta so he never realized she was just acting. I suppose that will be for the next one, allowing the first movie to end on a happy note.
I did like the part where Seneca Crane got locked into a room with a bowl full of Nightlock, that was interesting!

Thank God I’ve read the book. When we walked out of the theater, I looked over at my boyfriend and asked if he was confused about any of it, and he said pretty much everything. Too many things were left unexplained.  I did like how some of the smaller explanations were done as behind the scene shots (like in the control room – manipulation of the arena; or Caesar talking about what was going on – tracker jackers and cannon shots).
This is definitely a movie that you should not see until you read the book. But, at the same time I wish I hadn’t read the book so close to the movie because I did EXACTLY what I knew I would – I picked it apart. I think knowing every single difference made it less enjoyable. While it didn’t necessarily do the book justice, I was still impressed!

On a side note – I absolutely LOVE Rue’s 4 note signal brought to life. It was hauntingly beautiful and I’m making it my ringtone, yes I am! :D

Did you see it? What did you think?

Actors/Actresses: 5/5
The picks were all pretty darn close to what I pictured!
World-building: 5/5
Beautfiul!!
Stuck to the book: 3.5/5
Minor stuff didn’t matter, but the lack of explanation brought it down.
Delivery: 4/5
The silent moments could have been eliminated.
First half: 5/5
Ending: 2/5
The last fight fizzled out for me.
Overall rating: 4/5 starfish

3 responses to “Movie Review and Discussion: The Hunger Games”