« Black Widow Prize Pack Giveaway!
Horror October: The Show That is Slowly Growing on Me »
Posted by Jessi (Geo) on October 7, 2016 | 0 Comments 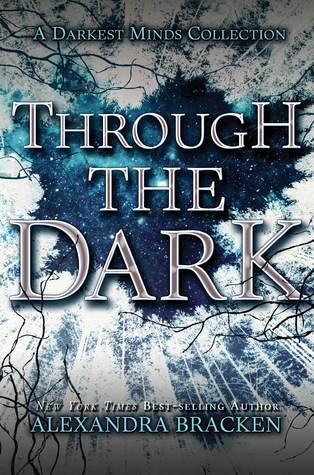 Through the Dark by Alexandra Bracken
Series: The Darkest Minds #3.5
Published by Disney Hyperion (10.6.2015)
Genres: Dystopian, Young Adult
Format: Hardcover, 400 pages
Source: I own it

Don't miss this breathtaking collection of stories set in the world of the New York Times best-selling Darkest Minds trilogy. Featuring ebook original novellas In Time and Sparks Rise, and a gripping, brand-new novella, Through the Dark is a must-have for fans of the Darkest Minds. This collection contains three novellas: In Time, Sparks Rise, and Beyond the Night, as well as a sneak peek at the first novel in Alexandra Bracken's new series, Passenger.

IN TIME
Gabe's life has been devastated in the wake of the economic crash. The only option left for someone like him to escape his tragic past is to leave his small town behind and to attempt to become a skiptracer. This already almost-impossible task is made all the more difficult by his first "score,"a young girl who won't speak, but who changes his life in ways he could never imagine.

SPARKS RISE
Sam didn't think things could get worse at Thurmand rehabilitation camp. Then the Reds arrive. Everyone assumed the kids with firepower had been killed years ago. Instead they were taken away, brainwashed, and returned as terrifyingly effective guards. To her horror, Sam recognizes one of them: Lucas, the one spark of light in Sam's dark childhood. Lucas has a deadly secret--he beat the brutal training that turned his fellow Reds into mindless drones. When Sam defends herself against an attack by a vile PSF guard and faces a harrowing punishment, Lucas must risk everything to save her.

BEYOND THE NIGHT
The government-run "rehabilitation camps" have been shut down, but kids with Psi powers are anything but free. Sam would rather be on her own than put in the care of a foster family and given the "cure"--a dangerous procedure that unclaimed kids across the country are being forced to undergo. But there's more at stake than just her own safety. Sam once made someone a promise, and the time has come to fulfill it. Now that she's out of her camp, Mia only has one thought in her head: finding Lucas, her beloved older brother.

One day, we will ignite and create a blaze that no one can put out, ignore, hurt. We will move forward as one, and in time, rise like sparks beyond the night.

At first, I didn’t really care about the story. I tend to see novellas as a waste of time, nothing but filler. But as soon as Zu made an appearance, I was interested. And I found myself becoming more and more invested in the story. And to tell you the truth, this story actually isn’t just filler like most novellas!

I didn’t care for Gabe at first, but I think that’s kind of the point. He’s kind of a jerk in the beginning, and sees the kids as “freaks” and compares them to dogs. But, that’s what he was taught. He believed what he was told. Refers to the kids as “it” instead of giving them a gender, so they don’t associate them as human. It was horrible, really. The way he thought of them was kind of repulsive.

Until along comes Zu. At first, she’s just a pay load to him. But slowly I could see how he started to soften toward her. I loved it! It was endearing that he kept making excuses for his behavior, not willing to admit to himself that he was starting to see her as a little girl instead of a freak. Starting to sympathize with her. It was adorable!

I found it interesting when Gabe said “She’s wrong about me.” Because in all actuality, she was right. But she wasn’t thinking of him the way he thought she was. He assumed that she thought him incapable of handling the situation, and that was why she kept slipping out of her handcuffs and taking care of the both of them. But really, she saw the good in him. She knew he could be trusted. So in truth, she was right about him. I love how she broke down those walls!

Just like in The Darkest Minds, I found Bracken’s prose to be very engaging. There’s just something interesting about it. I love how Gabe would make rhetorical statements from time to time – I’m not proud of it, okay? – which made it feel as if he were telling the story to you as the reader.

View Spoiler »LIAM’S MOM OMG! I was totally shocked by the revelation that Della was Liam’s mom and ALL THE FEELS. So awesome! « Hide Spoiler

Um, THAT ENDING. What the crap man!!! A cliffhanger on a novella?! View Spoiler »I HAVE TO KNOW IF HE’S ALIVE. I NEEEEED TO KNOW.  « Hide Spoiler

Dad used to say that it took effort to think good, positive thoughts, but it was easy to let your mind spiral to all the terrible outcomes, to worry about the things that hadn’t even come to pass yet.

Sometimes darkness lives inside you, and sometimes it wins.

Yet man is born unto trouble, as the sparks fly upward.

Broken. My heart is broken.

After the last novella ended, I should have braced myself. Alexandra bracken doesn’t know the meaning of rainbows and sunshine. No Happy Ever Afters. (I’m terrified to read In the Afterlight!)

I never cared much for Sam in The Darkest Minds, only because she didn’t have much of a role. Ruby’s feelings of guilt over what happened between them overshadowed anything else. I was actually kind of thrilled to see how Sam viewed Ruby – that she kind of obsessed over her, because she knew something was off. After Liam’s situation, I have hope!

They’ve done such a good job of making this place hell that I wouldn’t be surprised if the real one turned out to be a much nicer place.

I had forgotten how horrific the camps were. After not seeing one since the beginning of the first book, it had faded away. This story reminded me of that all over again. How terrible the kids were treated, like they were nothing more than animals. I was infuriated and disgusted at the adults for it!

I loved Sam and Lucas! Their bond was beautiful. I love seeing the Red side of things, too. Except for a certain character in Never Fade, we haven’t seen much of the Reds other than mindless drones. If there are two, hopefully there are more!

View Spoiler »I WANTED THEM TO GET OUT SO BADLY. It kind of kills me that their plan didn’t work. Please, PLEASE tell me Lucas isn’t completely broken like the other Reds now! He kept himself before, I really hope that’s still the case. I neeeed to know what happened to them in the next book! (I’m STILL waiting to hear if Gabe is still alive!!) « Hide Spoiler

THE OLD CREW ALL TOGETHER AGAIN ALDKJFHLAKSJDF;AKSDJF. *calms self* I didn’t realized how freaking much I missed this world! Why the hell did I wait so long to read this? I don’t even know. But it was wonderful to step back into the world I love so much one last time! (THAT MAKES ME WANT TO CRY SAYING THAT. I will never be a part of this series again T.T)

SO MANY FEELS. CHUBS. RUBY. LIAM. ZUUUUUU. I’m amazed at how the silliest things in this series can make me all misty. I LOVE the crew and their togetherness! It was kind of cool to see the gang from an outside perspective, and how close-knit they were. I love how Mia regarded them with bemusement!

I loved both Sam and Mia. Sam is pretty damaged and ruled by her fear, but I never saw her as the coward she sees herself as. I think she was strong in her own way, even though she didn’t know it. Mia was kind of childish and very stubborn, but had a strong will and a brave heart. I loved her interactions with Sam and how they came to depend on each other!

I mentioned in my review for In the Afterlight that the ONLY complaint I had is that I wanted closure for Sam and Lucas. After this novella, this series is 100%, unequivocally, perfect.

Hell isn’t a place you go; Hell is where we live now. Hell is being helpless to protect the people you care about the most, and save them from themselves.

“You want to know the real reason they never let us touch or talk to each other if they could help it? It made us strong. If you have people who love you, you can fall back on them when you’re afraid.”