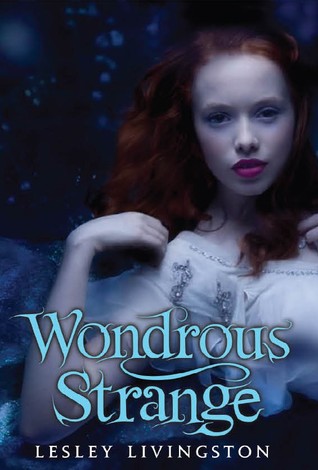 17 year-old Kelley Winslow doesn’t believe in Faeries. Not unless they’re the kind that you find in a theatre, spouting Shakespeare—the kind that Kelley so desperately wishes she could be: onstage, under lights, with a pair of sparkly wings strapped to her shoulders. But as the understudy in a two-bit, hopelessly off-off-Broadway production of A Midsummer Night’s Dream, wishing is probably the closest she’s going to get to becoming a Faerie Queen. At least, that’s what she thinks... In this fun, urban fantasy, Kelley's off-stage life suddenly becomes as complicated as one of Shakespeare’s plot twists when a nighttime trip to Central Park holds more than meets the mortal eye.

This is another one that I didn’t really know what to think of at first. The first page instantly grabbed my attention with talk of Oberon, Titania, and Puck from A Midsummer’s Night dream. While I can’t stand the Shakespearean language (mainly because it’s way above my head, ha), I love the lore of the courts – mainly because of reading the Iron Fey by Julie Kagawa. So, after this first page, my expectations were set high.
Then I got to the prologue and was highly disappointed that Livingston was guilty of purple prose. I had to read most of it twice as I was so distracted by the flowery handwriting that I had trouble focusing on what she was trying to say. There are bursts of it throughout the whole story – sometimes it smooths out, but then she goes back to it like she forgot she was supposed to be embellishing the words.
So focused on the pretty words, the delivery was hindered. I had trouble relating to the characters and felt no emotion or empathy for them. There were also points, particularly during an argument, that she uses italics – like, a lot – and that also served to distract me from what she was trying to convey. Exclamation points could probably have served for better emphasis than italics ever could.
Another thing that made it hard to take seriously was word usage like minion, harbringer, and henchmen. Really? I was trying not to laugh at loud, even though it was in serious parts of the book. (See how annoying the italics are? Yeah, I thought so too.) Oh, and then there were the flying monkeys that Kelley sees…easy, Dorothy.
The romance fell flat for me as well. Sonny sees Kelley in the park and immediately goes all creepy stalker dude on her, following her to her rehearsal, to her apartment…creepy, right? It seems like all guys in books now are catching Edward syndrome.
While I may have all of these complaints about the beginning (okay, really the majority), I must admit the end earned my grudging regard.  Livingston redeems herself in the end, where she finally brings the magic to life with an unexpected identity twist, and finally, some action and danger.

One response to “Review: Wondrous Strange by Lesley Livingston”