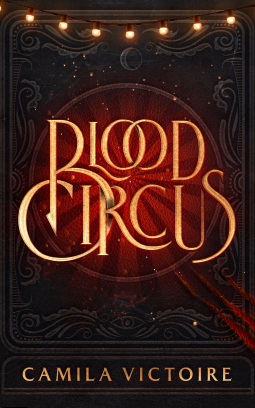 At the end of the twenty-first century, climate change and famine almost ended humanity—until the discovery of the Klujns, a barbaric, humanoid species with strangely colored eyes and even stranger abilities. Their crystal claws and bones fertilize barren soil, and their tender meat is a super-protein. Klujns are both humans’ saviors and natural-born enemies, meant to be hunted and used.

When sixteen-year-old Ava finds herself on the wrong side of a military fence erected to protect the North American Territory, she’s captured by Klujns and made to participate in the Blood Race, a macabre tradition where young human hostages compete to the death for Klujn amusement. At first, she is terrified, but as Ava observes Klujn behavior that contradicts what she’s learned, she begins to wonder: Are Klujns as different as she was led to believe? And, as she fights for her life, does it matter?

Inspired by the dark, bohemian influence of the circus she traveled with for five years, Camila Victoire delivers a twisted coming-of-age tale that combines elements of fantasy, magical realism, and suspense. Blood Circus will capture fans of Suzanne Collins’s The Hunger Games and Tomi Adeyemi’s Children of Blood and Bone. Its masterful worldbuilding, plot twists, and boundary-pushing Blood Race are wholly immersive—and compel readers to call their own long-held assumptions, values, and belief systems into question.

This book doesn’t have anything to do with an actual circus, so don’t let the title fool you. Think brutal alien Hunger Games, with kidnapped girls! It is definitely reminiscent of Hunger Games; however, to me it still stood out on its own. I saw some complaints that it was a regurgitated story, and yes maybe that’s true for the plot (the whole brutal competition part), but I found the world itself to be very unique!

First of all, I love that there isn’t romance in this book. The focus is absolutely on the action and world building. I loved the alien culture in this book, that was a driving point for me. I was super intrigued by the Klujn and wanted to know more about them! The world building was awesome, I had no problem picturing everything. I wasn’t sold in the beginning, but as soon as Ava gets kidnapped things picked up and I was hooked!

I thought the wolves and their relationship to the Klujn was awesome. View Spoiler »It was so cool that they had multiple lives and that their spots were indicative of how many lives they (and in turn, their Klujn) had left! « Hide Spoiler Although I wish the wolf that followed Ava was not named Wolf. How creative. -rolls eyes-

This book takes a look at humanity and ethics in the way that the humans treat the Klujn, and how right and wrong might look different depending on where you’re standing, especially if you don’t have all the information. It’s totally believable that humans would hunt down aliens and basically kill them for sport View Spoiler »and make them out to be the bad guys when they just want to live, pretending it’s not murder because they’re not technically human « Hide Spoiler. I appreciated how brutal and unflinching this book was.

Okay, so complaints. While I loved the Klujn, I never really got a grasp on what they actually looked like. The descriptions were spotty and vague, and in the beginning I was picturing them similar to the Grand Councilwoman in Lilo & Stitch. They were made out to be monsters. But, as the book went on, I got the impression that they were easy to mistake for human. So I was a bit confused on their physical attributes. The other complaint I have is that it seemed like there might have been *something* between Ava and Diablo (who intrigued me, btw), and the age gap between them makes me not okay with that. I think he was in his mid twenties? and she’s only 16. Which is pretty gross, alien or no. I’m really hoping this is not pursued in the sequel.

Another complaint I have is that I never really connected to any of the side characters. They all had pretty distinct personalities, but it almost felt like the author was trying too hard to make each one a certain type of person. Almost cliche. And when things happened to certain characters, I didn’t bat an eyelash because I didn’t care about them. Diablo was really the only character I was super intrigued by.

View Spoiler »It was very predictable that Ava was part Klujn, but not in a bad way. It was still enjoyable seeing her journey in discovering who she was. I also felt really bad for her when she finds out the truth about her adopted parents. However, I didn’t care for the twist of her being a royal blood Klujn. Because of COURSE she has royal blood. She’s super speshul. Sigh. « Hide Spoiler