« Life of a Blogger: Clothing
Some of You Have Book Twins…I Have Book QUADRUPLETS! »
Posted by Jessi (Geo) on September 26, 2014 | 4 Comments 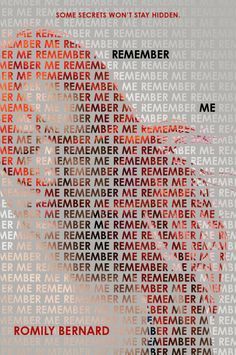 In the sequel to Find Me, Wick Tate, sarcastic teen hacker, is back and once again dealing with criminals and corrupt cops…and a brooding new love interest. Will Wick persevere when some secrets refuse to stay hidden?

Wick had thought her troubles were over.

But she should’ve known better.

Not only is she embroiled in a new murder case, which starts with a body with “Remember Me” carved into it and doesn’t stop there, but she also discovers new evidence surrounding her mother’s suicide…which leads her right back to her imprisoned deadbeat dad. And she has to deal with her flirty new hacker friend, Milo, sniffing around—which her boyfriend, Griff, isn’t too happy about.

The pressure might be too much as secrets—including Wick’s own—climb to the surface.

I have to say that this book is one of the few sequels I’ve read this year that was just as good as the first book!

The mystery aspect of this book rocked! It made for very fast pacing, keeping you flipping pages as fast as you can to find out what happens next. I do have to say that I found this one a tad predictable (whereas I didn’t figure out the first one!). View Spoiler »I figured out early on that it was in fact Ian, not Kyle, that was involved. I felt like they were pushing too hard for the culprit to be Kyle. Then, when the files mentioned “both boys,” I predicted that there was a third brother that no one knew about that got pushed to the side – hence the “remember me” message. Pretty damn close! « Hide Spoiler But that didn’t make the journey in discovering the truth any less exciting!

I’m putting this next part in spoilers because I wouldn’t have wanted to know before reading. View Spoiler »There’s a love triangle. I did not know this going in. But, it wasn’t really a bad one. Thankfully Wick didn’t flip flop back and forth. She stuck with Griff, even though Milo expressed clear interest, and after things ended with Griff she started to develop something with Milo.

I am sad that it didn’t work out with Griff, but at the same time, I think Milo is a better fit for her. He gets her in a way that Griff doesn’t, and he doesn’t judge her for her past or her decisions. I was kind of disappointed with Griff in the fact that he didn’t understand her motives. Team Milo for me! (Even though his name makes me think of a fat and crazy 1-year-old yellow lab, haha.) « Hide Spoiler

Wick was still awesome. She was a badass, but at the same time she was flawed, making her very realistic and easy to identify with. I do have to say that I quite loved Milo, he was my favorite! He was adorable and I thought it was funny that he kept flirting with Wick despite her rejections. While I loooved Griff in the first book, he just didn’t do it for me this time around =/

While I really enjoyed this book, for some reason it just doesn’t reach 5 star quality. I can’t quite put my finger on it – I suppose in a way it doesn’t stand out as much as I’d like it to, and I didn’t get a high amount of feels from it. But it’s still something I would recommend to fans of mystery. And how about that ending? Obviously there’s going to be a third book! (P.S. I didn’t know about the 3rd book until I looked it up after finishing this one. Lol!)

“You believe in true love? Like love at first sight or whatever?”
“No.”
“Me either. I think it presupposes that love is perfect – that people are perfect or they can be. I think you’re supposed to fall in love with someone who’s perfect for you. Someone whose failings are arranged in a way that they hinge with yours.”

4 responses to “Review: Remember Me by Romily Bernard”