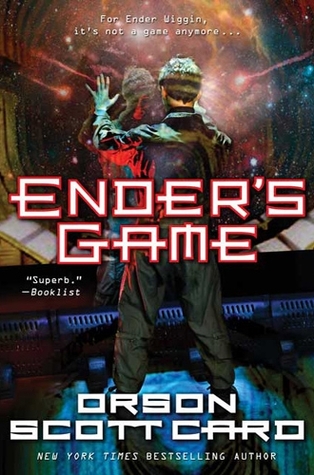 Once Again, Earth is under attack. An alien species is poised for a front assault. The survival of humanity depends on a military genius who can defeat the aliens.

Ender Wiggin. Brilliant. Ruthless. Cunning. A tactical and strategic master. And a child.

Recruited for military training by the world government, Ender's childhood ends the moment he enters his new home: Battle School. Among the elite recruits Ender proves himself to be a genius among geniuses. In simulated war games he excels. But is the pressure and loneliness taking its toll on Ender? Simulations are one thing. How will Ender perform in real combat conditions? After all, Battle School is just a game.

I’m beyond disappointed in this book. It had SO many glowing reviews, and came highly recommended from several blogging friends. I thought for sure it was going to be amazing, yet I hated what I did read of it. (I even watched the movie and wasn’t impressed with that, either. The whole “children are the only ones who can save the world” is just too much for me I suppose…) I made it a little past 100 pages or so before I started skimming, and made it maybe another 40-50 pages before I just couldn’t take it anymore.

First of all, I was bored. Out of my freaking mind. There were things happening, but it felt like nothing was happening. The pacing was very slow for the book being so short. I didn’t care at all about what was going on and had no investment in Ender or any of the other characters.

Secondly, and probably my biggest issue with the book: the writing was HORRIBLY sophomoric and grated on my nerves hardcore. The main character is six years old, but talks and acts like a mature adult. I’d seen that this book was kind of MG/YA crossover. It isn’t. The only thing Middle Grade about this book is the writing. (And maybe Ender’s age.) It was so ridiculous and unbelievable. The whole book was quite ridiculous, really. Some of the interactions had me rolling my eyes because of the ridiculousness. (I wish I had specific examples here. By the time I realized that so many things were annoying me, it was too late to keep track.)

Ender had little to no personality to speak of. He was special, oh so special, but I just couldn’t see why. It really just appeals to the sense of empowerment – I get it, I do. I was bullied in high school. Seeing an underdog rise up above the bullies is empowering. (Or should be.) But it just didn’t do it for me. Ender was too flat of a character for me to give a shit. Oh, and did I mention he was violent? While the explanation for the violence made sense (he was defending himself, he was doing it so he wouldn’t get bullied anymore), his actions were so calculated and emotionless that it was actually kind of disturbing to think that it was a six-year-old doing the things. I kept forgetting that Ender was actually 6 every single time until it was brought up again. It just wasn’t believable for a six-year-old to act the way he did.

Also, are adults in the future f*cking stupid or something? Why can the adults do absolutely nothing but a bunch of elementary age children can save the world? It was just so ridiculous I can’t even. I know I’ve said the word ‘ridiculous’ about 345341262 times already, but that is the perfect word to describe this book.

Oh, and then there’s this little gem:

“A few girls. They don’t often pass the tests to get in. Too many centuries of evolution are working against them.”

There’s so many things wrong with that statement I can’t even. I realize that this book is pretty old, but come on now. Women aren’t fucking helpless. So I guess we go backwards in the future? All of the progress we’ve made as far as women’s rights go are apparently non-existent in the future. Magically.

Something else that bugged the SHIT out of me was the way some of the children talked. They referred to it as slang, but it wasn’t slang. It was straight up uneducated speech. With atrocious grammar.

“You nobody, got that? You not anybody till you gots you first kill.”

And these are supposed to be – and I quote – “the most brilliant children in the world?” Really? Let’s revisit that word I was talking about – RIDICULOUS. Absolutely, positively ridiculous. Total waste of my time. I usually love Sci-fi, but this one was definitely not for me.