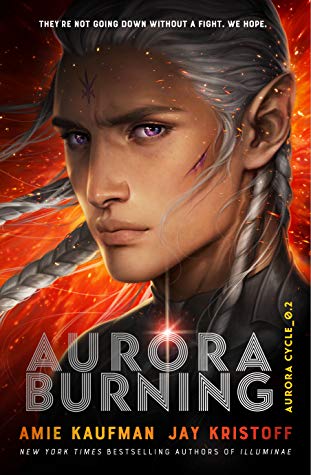 Our heroes are back… kind of. From the bestselling co-authors of the Illuminae Files comes the second book in the epic series about a squad of misfits, losers, and discipline cases who just might be the galaxy’s best hope for survival.

First, the bad news: an ancient evil—you know, your standard consume-all-life-in-the-galaxy deal—is about to be unleashed. The good news? Squad 312 is standing by to save the day. They’ve just got to take care of a few small distractions first.

And the cadre of illegit GIA agents with creepy flowers where their eyes used to be, who’ll stop at nothing to get their hands on Auri.

Then there’s Kal’s long-lost sister, who’s not exactly happy to see her baby brother, and has a Syldrathi army at her back. With half the known galaxy on their tails, Squad 312 has never felt so wanted.

When they learn the Hadfield has been found, it’s time to come out of hiding. Two centuries ago, the colony ship vanished, leaving Auri as its sole survivor. Now, its black box might be what saves them. But time is short, and if Auri can’t learn to master her powers as a Trigger, the squad and all their admirers are going to be deader than the Great Ultrasaur of Abraaxis IV.

Shocking revelations, bank heists, mysterious gifts, inappropriately tight bodysuits, and an epic firefight will determine the fate of the Aurora Legion’s most unforgettable heroes—and maybe the rest of the galaxy as well.

HOLY. SHIT. YOU GUYS. This was my most anticipated 2020 release, and it did NOT disappoint! It was just as amazing and epic and mind blowing as Aurora Rising was. No second book syndrome here! I devoured this book within 24 hours of receiving it (and may or may not have screeched like a banshee and done a happy dance when it arrived, heh).

Feeling so tiny makes me realize just how big what we’re all a part of is. And being out here in all this emptiness somehow makes me completely aware of everything I am and have. These friends, who’re risking their lives for me. Our little light, shining in all this darkness. I’ve never really believed in destiny. But out in all that nothing, I’ve never been so certain of who I am and where I’m supposed to be.

I missed Squad 312 so so much! I love them all to pieces, and this one delivered all of the feels – especially many laughs – that the first book did. There were so many moments were I was laughing out loud at the banter! (My boyfriend probably thinks I’m insane, lol!) I seriously love each and every one of the characters, they are hardcore squad goals. I usually hate switching POVs, but this one works for me! They each have a very distinctive voice (even reading I could hear the narrators in my head, I am DYING for the audio of this one) and personality. I don’t even know which one is my favorite because I love them all! If I HAD to choose I think I’d have to say it’s a tie between Scarlett and Fin because sarcasm ;)

“I know my friends, and they are few. But those few I have, I would die for.”

Shit hit the fan in this one! Talk about INTENSE. (Um, to reiterate HOW intense, Golden Boy dropped the F-bomb and if you know Tyler that basically means the world is ending. Ohhh snaaaap.) There were some crazy moments and some even crazier bombs dropped – one in particular freaking BLEW me AWAY like whaaaaat?! View Spoiler »THE STARSLAYER IS KAL’S FATHER?! SLAP ME THRICE AND HAND ME TO ME MAMA. I was so gobsmacked at the revelation that I actually gasped and yelled WHAT? out loud and just kind of sat there stunned and gaping for a minute! I don’t think I’ve ever been so blown away by a plot twist, ever. The fact that I didn’t even see it coming (and I pride myself on predicting things okay, I read/watch so much fiction that I’ll sit and call things before they happen – to the point that I’ve had people ask “have you seen this before?!” on my first watch) makes it even more epic! But seriously, HOW did I not see it coming?! In hindsight, there were a few hints dropped. I mean, I knew Kal was lying about his father. He was being super shady and it was obvious he was hiding something from Auri. But I thought he was lying about the circumstances of his death, not that he wasn’t actually dead! Whuh! Also, the Jones twins are half Syldrathi?!? And Waywalker?!?! « Hide Spoiler

I loved the introduction of Saedii, Kal’s sister! She was so badass! (Kind of scary at times, tbh…) Um, is it terrible of me that I ship her and Tyler?! They were hilarious together! I liiiiive for hate to love romances. (Sorry, Cat! I still love and miss you!)

Speaking of Cat, there was a healthy dose of grief without her in this one. I thought it was handled really well. She would pop into their minds at random times – during a fight when they could have used her, while talking about pilots, looking at her stuffed dragon, etc. Even though she was gone, she most definitely wasn’t forgotten. There was a clear hole in the team where she should have been. It was so sad!

I loved learning more about Zila, too! Her past actually brought me to tears. Zila my poor baby!! She really grew on me in this one. She’s quiet, but she’s very complex. Also, her driving skills (orrr lack thereof) are hilarious.

Um, THE ENDING?! Excuse me, sir and ma’am. How could you leave us like that. HOW COULD YOU?! View Spoiler »Sooo basically everyone is in mortal peril and the team is in shambles and I NEED TO KNOW THEY’RE OKAY. I mean, I’m sure they will be (because Amie lolol). But it kills me to not know! « Hide Spoiler And also THE PEN?? I need to know what the pen is for?! They all got super useful gifts (also side note: How the ever loving hell did he KNOW what they needed, is there some time travel shit going on here?!) EXCEPT FOR FIN who just got a ballpoint pen?? Like, is it just so he can write the note to himself from the future, or is there another purpose? Is he going to stab someone with it in book 3?! WHAT IS THE PEN FOR?! Am I just looking way too much into this? Lmao! All of the characters are in mortal peril and my dumb ass is over here worrying about a fucking pen. Yep.

“Love is what drives us to great deeds, and greater sacrifices. Without love, what is left?”

Tomorrow might be worth a million yesterdays. But a tomorrow without him isn’t worth anything at all.