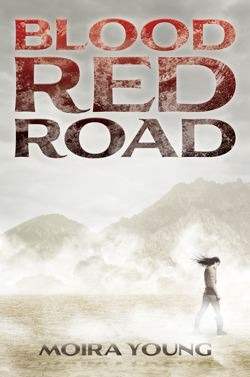 Saba has spent her whole life in Silverlake, a dried-up wasteland ravaged by constant sandstorms. The Wrecker civilization has long been destroyed, leaving only landfills for Saba and her family to scavenge from. That's fine by her, as long as her beloved twin brother Lugh is around. But when a monster sandstorm arrives, along with four cloaked horsemen, Saba's world is shattered. Lugh is captured, and Saba embarks on an epic quest to get him back.
Suddenly thrown into the lawless, ugly reality of the world outside of desolate Silverlake, Saba is lost without Lugh to guide her. So perhaps the most surprising thing of all is what Saba learns about herself: she's a fierce fighter, an unbeatable survivor, and a cunning opponent. And she has the power to take down a corrupt society from the inside. Teamed up with a handsome daredevil named Jack and a gang of girl revolutionaries called the Free Hawks, Saba stages a showdown that will change the course of her own civilization.

Blood Red Road has a searing pace, a poetically minimal writing style, violent action, and an epic love story. Moira Young is one of the most promising and startling new voices in teen fiction.

Gosh, I don’t even know where to start! Even with all the hype, this book was so much more than I expected! I mean, I love dystopians. And I pretty much like most of the ones I read. But this one pushed and shoved itself right to the top of that list! It’s the best dystopian I’ve read since The Hunger Games!

The world building. Ahhh, so fabulous! It was CINEMATIC. I had absolutely no problem picturing everything in my head like I was actually seeing it. (As you all should know by now, I’m big on world building) And there were times when it had the feel of Mad Max, Doomsday, and Waterworld (without the water, of course). Is there a word for that? It wasn’t steampunk, but….like the outfits that the Pinches wore reminded me of those movies. The post-apocalyptic style dress. I can’t describe it >.<

I think it would have been a bit difficult seeing the prose at first (my inner grammar Nazi cringes): all kinds of double negatives, and bad verb usage like ‘Pa weren’t’ and ‘I ain’t’….but the audio really pulled it off, and it worked with the story. I liked it though, because it makes you able to get into Saba’s character.

Saba. Ohh, Saba. The way I feel about her is complicated. She annoyed the crap out of me sometimes, but overall I mostly liked her. She was selfish, stubborn, and headstrong; and sometimes she was downright mean to poor Emmi. But the fact that she was flawed made her more realistic and relatable. And I gotta hand it to her, she doesn’t give up on Lugh no matter what!

Bloody Jack. What is it with him? What is it about him that he seems to charm everybody and everything that crosses his path? Ash, and pretty well every other Free Hawk, my sister, and now my damn crow. I swear, if there was a rock in his path that he couldn’t be bothered steppin’ over, all he’d have to do was give it one look and it’d roll outta the way.

JACK. I seriously love this guy! Things were pretty serious until he came along. I loved the levity he brought to the story! Especially when he told Saba, “The next time you look like a fool, it’ll be your own doin.'” YES. I found myself giggling many times because of him. He was charming, sometimes arrogant, and I found him incredibly endearing!

I loved the romance. There was just a touch of it, and it developed slowly, so it wasn’t overwhelming. Just the way I like it! And I thoroughly enjoy it when the girl can save the guy just as much as vice versa! I thought Jack’s rule of three was awesome: Save someone three times, and their life belongs to you.

I adored the banter between them. Jack teased Saba a lot, and because she was so touchy (and could NOT take a joke), she was constantly angry at him. It was hilarious! He was great at getting under her skin.

Emmi was adorable! She was a pain in the arse, and never did what she was told; but she was tough for her age, and determined. I felt sorry for her because of the way Saba treated her. It actually really irritated me in the beginning how terrible Saba was to her little sister, and how much she took her for granted.

The supporting characters were great too, because they each had their own individual personalities. And I loved the Hawks! Especially Maev. She was badass! I liked Ash and Epona too. And Ike!

The Pinches were horrible people and inspired massive hatred. And Vicar Pinch was SO creepy! He was a bit crazed and disturbed, so he was the perfect scary villain.

The beginning was a little slow for me, but it was probably only dragged out because it was an audiobook. But after Saba and Emmi got captured, things really picked up! I loved the setting, and especially liked the desert boat. Very cool! And the scene with the hellworms was INTENSE. I was absolutely captivated!

There were times when I was driving with my hand over my mouth in shock at what was happening. Things didn’t always go the way I wanted, and there was loss and sadness. This book made me feel a wide range of emotions: shock, sadness, anger, and TRIUMPH! – in a part toward the end, I was all OHMIGOD YES! out loud (thankfully in the car, by myself).

The only complaint I had was that the word ‘says’ was VASTLY overused. I understand it’s at the education level of Saba’s language, but still. It drove me nuts after a couple paragraphs, and the word started to lose its meaning.

I really, REALLY hope that this book will get picked up by a movie producer. It would be amazing on the big screen!

Favorite character: DeMalo. Why? I really don’t know, but I have a strange attraction to him. He intrigued me!! I seriously hope there’s more of him in book 2 :)

Heather’s voice was a little monotonous at first…but once I got used to it, I really enjoyed listening to her! She pulled off the prose very convincingly, and she had SO many different voices for different characters…I could easily tell who was speaking.

Again, with audio, there’s always the downside of not knowing how the crap to spell things. I had to look up many of them, because I was spelling basically all of the characters’ names totally wrong. *sigh*

“Keep ’em safe, Jack,” says Maev. “If you don’t, we’ll hunt you to the ends of the earth. And when we find you, we’ll rip out your guts and feed ’em to the jackals while you watch.”

Did I mention I love Maev?