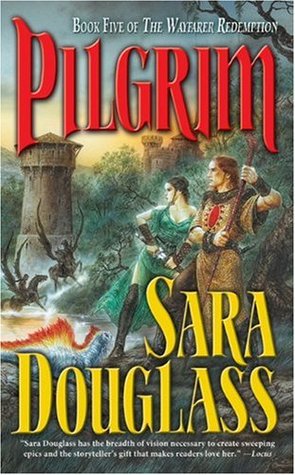 The Star Gate is destroyed and the Star Dance is dead. Icarii Enchanters, gods, and humans alike are helpless as the TimeKeeper Demons lay waste to Tencendor.

There must be hope left, but no one knows where to find it. Death lurks in every twist of the Maze, but only those who have the courage to endure death can learn the secrets of the ancient enemy.

Caelum SunSoar and his parents know that the only way is to discover the ancient secrets that lay trapped in the mountain Star Finger, and Faraday, martyred heroine, grows ever fearful -- and ever bitter. Must she lose everything to the land?

I had forgotten how….disturbing the TimeKeeper Demons were! Holy crap, some of the parts made me cringe so hard. View Spoiler »I remembered WolfStar getting raped – that was so awful, how could I forget? I think that part scarred me for life O_O « Hide Spoiler But there were a lot of other grotesque and disturbing things that I hadn’t remembered. There are some pretty unsavory things in this story. But that’s not really a bad thing, because if Demons were ravaging the world, isn’t that what one would expect? Douglass brought them to life in their terrifying and monstrous nature.

I found that I still remembered much of this story, but there were still some surprises. I still don’t know quite what Katie’s role is, although some of it is coming back to me.

It was also really hard to go through Faraday’s struggle again with her. At times, it was almost annoying how distrustful she was of love and how much she pushed DragonStar away, but at the same time, who can blame her? She’s used to being sacrificed for the greater good, and her entire life has been full of pain and sacrifice. She’s become such a martyr that she has trouble breaking free of that mold. I was cheering for her then, and I still am cheering for her now. She was always my favorite character! I love her resilience. She always manages to stay true to her own heart, despite everything she’s been through.

And then there’s Zenith and StarDrifter. It should be totally disgusting that they’re grandfather and granddaughter, but because it’s normal in SunSoar tradition, and they’re not human and have different cultures and beliefs, I found myself forgetting about their relation and rooting for them. I love StarDrifter, I really do, and they were perfect for each other. (But seriously, you have to set aside the fact that they’re related – if you think too much about it, it’s kind of disturbing.) By this late in the series, you kind of get used to the creepy SunSoar affection for each other.

I loved the magic of the evacuation into Sanctuary! I loved Drago’s sack full of ingredients, the Songbook, and the power of the Enemy. On the contrary, the Demon’s quest to revive Qeteb was creepy! But at the same time, it was kind of awesome. All of the life parts in the Lakes, and the way they were done – brilliant! I think those were my favorite parts – the journey to gain Breath, Warmth, Movement, and Soul. It’s so unique that it’s amazing even as it’s disturbing. I loved it!

View Spoiler »Even knowing Caelum was going to die, I still cried when it happened. Which is silly, because I never really liked him much. I remembered that he was the one to kill RiverStar (um, they were lovers, isn’t that disturbing? O_O), but even still I was sad when it happened. He knew he was wrong, knew he’d made mistakes, and wanted to atone for them. Also, totally random, but the song I’m Sending You Away from the Oblivion soundtrack was playing in that final scene in the Maze, and the music fit perfectly because the buildup happened when Caelum was running from Qeteb, and the beautiful piano part at the end happened when he met up with RiverStar in the Field of Flowers (which may have been 90% of why I was crying, it’s sooo beautiful)! Also, SHRA. *sobs* « Hide Spoiler

“My heart is always your Sanctuary.”