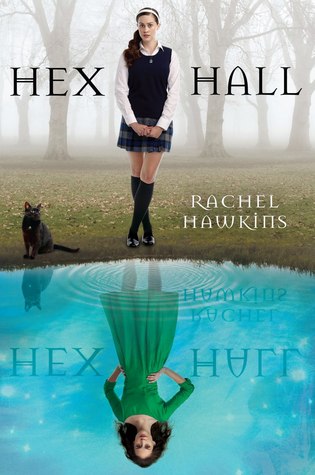 Three years ago, Sophie Mercer discovered that she was a witch. It's gotten her into a few scrapes. Her non-gifted mother has been as supportive as possible, consulting Sophie's estranged father--an elusive European warlock--only when necessary. But when Sophie attracts too much human attention for a prom-night spell gone horribly wrong, it's her dad who decides her punishment: exile to Hex Hall, an isolated reform school for wayward Prodigium, a.k.a. witches, faeries, and shapeshifters.

By the end of her first day among fellow freak-teens, Sophie has quite a scorecard: three powerful enemies who look like supermodels, a futile crush on a gorgeous warlock, a creepy tagalong ghost, and a new roommate who happens to be the most hated person and only vampire student on campus. Worse, Sophie soon learns that a mysterious predator has been attacking students, and her only friend is the number-one suspect.

As a series of blood-curdling mysteries starts to converge, Sophie prepares for the biggest threat of all: an ancient secret society determined to destroy all Prodigium, especially her.

I devoured this book within 3 hours. I think that’s a record for me! I don’t finish a book in one day very often, but it usually takes me 4 or 5 hours for a 300 page book. Hex Hall was just that amazing!
I loved Sophie. She was a very easy lead to relate to – seemingly average, not the most popular and maybe even a bit nerdy. She was strong willed and sarcastic, and even though she didn’t feel like she fit in anywhere, she was still confident. I liked most of the characters, but there were still ones in there that inspired irritation. Or, like Elodie, full blown hatred. I wanted to strangle her repeatedly with my Guitar Hero controller cord (what can I say, it’s the closest thing in range). She was such a heinous bitch!! There were a few times where I thought she was alright, but just for a (minuscule) fleeting moment. All in all I hated her with the fire of a thousand suns. I don’t know how Sophie kept from punching her pretty teeth out.
Then there was Jenna – a quirky vampire that loved pink (she has a pink stripe in her white hair)…and read manga! She was awesome!! Archer was okay too – even though he had a few buttface moments in the beginning, he grew on me. I would have liked to see more of him.
The romance took a back burner, which was nice. There were a few flirty moments and some tension, then a big explosion (oh my! ahhh ^.^), then the secret – holy crap! Never saw that coming. I’m dying to know what happens regarding that!!
And the ending…oh Rachel, how can you leave it like that? I can’t wait to read Demonglass! I requested it at the library but it could take days, so I’m seriously contemplating buying it. :D
Favorite character: Jenna!

“What’s going to happen?”
Jenna shook her head. “Let’s just say you may regret that second piece of cake.”
Oh my God. Regret cake? Whatever was about to happen must be truly evil.
I scowled. Being manipulated has always been one of my least favorite things. Right up there with snakes. And Britney Spears.
This room looked like it had been decorated by the unholy lovechild of Barbie and Strawberry Shortcake.
This just made me giggle. :)