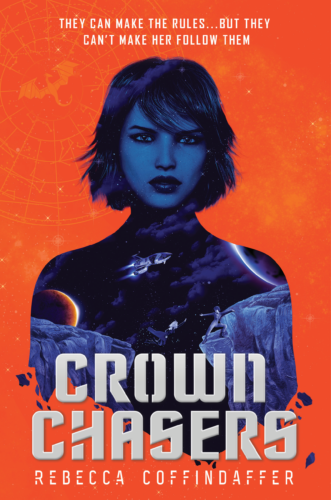 A deadly competition for the throne will determine more than just the fate of the empire in this duology opener.

Alyssa Farshot has spent her whole life trying to outrun her family legacy. Her mother sacrificed everything to bring peace to the quadrant, and her uncle has successfully ruled as emperor for decades. But the last thing Alyssa wants is to follow in their footsteps as the next in line for the throne. Why would she choose to be trapped in a palace when she could be having wild adventures exploring a thousand-and-one planets in her own ship?

But when Alyssa’s uncle becomes gravely ill, his dying wish surprises the entire galaxy. Instead of naming her as his successor, he calls for a crownchase, the first in seven centuries. Representatives from each of the empire’s prime families—including Alyssa—are thrown into a race to find the royal seal, which has been hidden somewhere in the empire. The first to find the seal wins the throne.

Alyssa’s experience as an explorer makes her the favorite to win the crown she never wanted. And though she doesn’t want to be empress, her duty to her uncle compels her to participate in this one last epic adventure. But when the chase turns deadly, it’s clear that more than just the fate of the empire is at stake. Alyssa is on her most important quest yet—and only time will tell if she’ll survive it.

HOW DID I NOT KNOW ABOUT THIS BOOK SOONER?!?! This book has been out for two freakin’ years and I’m just now finding out about it. I think maybe I had seen it in 2020 when it was released, and didn’t look twice because the cover and title didn’t appeal to me much. I was googling orange covers for the #readtherainbowchallenge and this popped up so I took a second look at it and decided to pick it up. I knew nothing going in and had zero expectations.

The result? I was blown away! This book was SO fun and I can’t believe I never hear anyone talk about it. It’s so underhyped! Plus the audiobook narrator is positively phenomenal. She was PERFECT for Alyssa! Her inflection and sarcasm were just *chef’s kiss* I giggled out loud so many times! She’s probably one of my favorite MC’s that I’ve read in quite a while. We would totally be besties. Hell Monkey was a fun sidekick and I appreciate so hard that the romance took a backseat to everything else.

I looove space books and am constantly in search of more. I had picked up Infinity Files because I was craving a galactic adventure type space book, and it was a huge disappointment. This book filled the hole perfectly! It’s got very Ready Player One and Aurora Rising vibes but still stands uniquely on its own. What a hidden gem! I highly recommend giving this one a try!