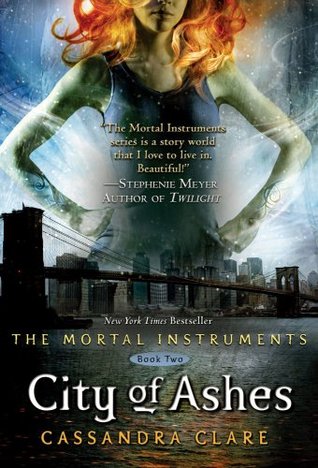 Clary Fray just wishes that her life would go back to normal. But what's normal when you're a demon-slaying Shadowhunter, your mother is in a magically induced coma, and you can suddenly see Downworlders like werewolves, vampires, and faeries? If Clary left the world of the Shadowhunters behind, it would mean more time with her best friend, Simon, who's becoming more than a friend. But the Shadowhunting world isn't ready to let her go — especially her handsome, infuriating, newfound brother, Jace. And Clary's only chance to help her mother is to track down rogue Shadowhunter Valentine, who is probably insane, certainly evil — and also her father.

To complicate matters, someone in New York City is murdering Downworlder children. Is Valentine behind the killings — and if he is, what is he trying to do? When the second of the Mortal Instruments, the Soul-Sword, is stolen, the terrifying Inquisitor arrives to investigate and zooms right in on Jace. How can Clary stop Valentine if Jace is willing to betray everything he believes in to help their father?

In this breathtaking sequel to City of Bones, Cassandra Clare lures her readers back into the dark grip of New York City's Downworld, where love is never safe and power becomes the deadliest temptation.

Did I mention I love this series? It’s so incredibly addicting and sticks with you long after you’ve read the book. The world of the Mortal Instruments is beautifully and realistically painted, magical and enchanting – even the second time around, I’m engrossed in the series!
The stakes are even higher in this one with Valentine and his terrifying and sinister agenda. But is it really a surprise? He does evil so well! He’s so fanatical about his beliefs it’s disturbing. Things get so intense and messed up, everything goes all to hell in a handbasket, and everybody is hurting each other and backstabbing each other and yeesh. Can’t we all just get along?
I feel like this is a defining book for Simon in the series, mostly because of the major change he has to deal with. I really felt sorry for him though, because of the way Clary treats him. She kind of pissed me off a few times in there because of that. She lead him on a lot, and while I understand that she loves him, she knows she can’t give him the kind of love he wants from her. But still, the fact that she kisses him, that they have an almost relationship and she allows it, then turns around and goes right back to pining for Jace was downright slimy. I almost always hate love triangles, and while the Simon-Clary-Jace triangle didn’t bother me in the first book, that was not the case here. Clary’s constant waffling made me want to slap her.
By the way, I forgot to put this in the first review, but Jace…and Clary…eeewwwuh. I remember the first time reading it being like, what? WHAT?! HOW CAN THEY BE….?! But somehow the disgust was never there for me, because I never really believed it. I kept waiting for the punch line… ‘Oh just kidding! They’re not really. You actually believed that?’ Sadly, it didn’t come. The relationship stays awkward and complicated, and neither of them can man up and tell each other how they feel because it’s just so forbidden. It’s so freaking frustrating!
If you haven’t read City of Bones yet, my question to you is: Why the hell not?!  Get to it. Like, right meow.
Favorite character: Hmm, it’s a tie between Jace and Magnus. Jace’s awesomeness has diminished from book one…

Growing up happens when you start having things you look back on and wish you could change.
“I’ve got a stele we can use. Who wants to do me?”
“A regrettable choice of words,” muttered Magnus.

2 responses to “Review: City of Ashes by Cassandra Clare”