« Excerpt Campaign: To Sleep in a Sea of Stars by Christopher Paolini
ARC Review: Goddess in the Machine by Lora Beth Johnson »
Posted by Jessi (Geo) on June 15, 2020 | 0 Comments 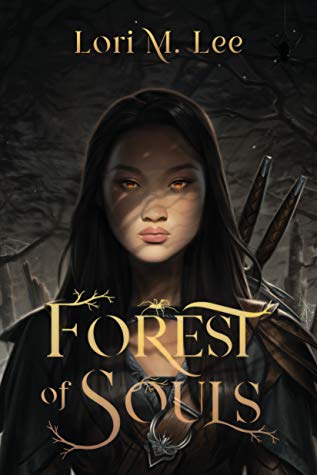 Danger lurks within the roots of Forest of Souls, an epic, unrelenting tale of destiny and sisterhood, perfect for fans of Naomi Novik and Susan Dennard.

Sirscha Ashwyn comes from nothing, but she’s intent on becoming something. After years of training to become the queen’s next royal spy, her plans are derailed when shamans attack and kill her best friend Saengo.

And then Sirscha, somehow, restores Saengo to life.

Unveiled as the first soulguide in living memory, Sirscha is summoned to the domain of the Spider King. For centuries, he has used his influence over the Dead Wood—an ancient forest possessed by souls—to enforce peace between the kingdoms. Now, with the trees growing wild and untamed, only a soulguide can restrain them. As war looms, Sirscha must master her newly awakened abilities before the trees shatter the brittle peace, or worse, claim Saengo, the friend she would die for.

After spending nearly a month trying to get into this one and fighting with myself over picking it back up, I’ve decided it’s time to let go. Which makes me SUPER bummed, because it was one of my most anticipated 2020 releases!! I wanted so badly to love this one, but I made it 200 pages in and I was still struggling hardcore and feeling really apathetic toward it.

It started off really strong – I was enjoying the writing, and super intrigued by the world. I felt for what Sirscha was going through, too. But somewhere along the line, that interest just…stopped.

I started to get annoyed by little things. To be honest, most of it could have been solved by just reading the synopsis. But I like to go in blind! I was shocked when Saengo, the best friend, died. And I liked that! I love when an author doesn’t spare their characters. However, shortly after, Saengo was brought back to life. (This is all in the synopsis, which I clearly didn’t remember lmao!) And that really bugged me!! I hate that fantasy always brings its dead back to life, so you can never trust when someone does die because they’re more than likely not going to stay dead. And that robs me of feeling, because I don’t believe it. This is such a pet peeve for me in fantasy, as much as I love the genre.

So, I was already annoyed that she came back to life in the first place. There was all this talk of familiars – a spirit in the form of an animal, bonded to the shaman, that connects them to their magic – and I was SUPER excited for this aspect! I love the idea so much! BUT, View Spoiler »Saengo becomes Sirscha’s freakin’ familiar. I don’t know what this bummed me out so much. It’s actually pretty cool to have a human as a familiar, and was an interesting little twist (although one I figured out pretty easily, considering it kept getting repeated that a shaman NEEDS a familiar to do magic), but I guess I had just hyped myself up so much to the idea of an animal familiar, that I just ended up being disappointed that it was only a human soul and not an animal. « Hide Spoiler Whomp whomp.

THEN, as if I wasn’t annoyed enough, we get the Chosen One trope. (Again, this is basically all in the synopsis.) As soon as they mentioned that soulguides were super rare and there’s only ever been one in history, I was like, Welp, she’s going to be one of those. And her golden eyes on the cover were kind of spoilery to that aspect, if you prefer to NOT read the synopsis and go in and be surprised. I also guessed as soon as she mentioned she had scars on her ear that she was actually Highborn as well and had her ears cut (they have pointy ears). I found that reveal kind of cliche.

Actually, the whole rest of the story felt pretty generic. I was interested in the drakonys (basically bipedal dragons used as horses), but I had trouble picturing them, and they weren’t that prominent in the story anyway. The magic system was interesting, but overall I didn’t feel like the story added anything to the fantasy genre. It didn’t feel unique to me, and doesn’t have anything super special enough to stand out in the sea of high fantasy that I’ve already read before. Nobody is more disappointed than I am.

I might still continue, eventually. I don’t want to not like it, and I’m intrigued about Ronin the Spider King, so I may try again at a later time, just for him. Who knows.