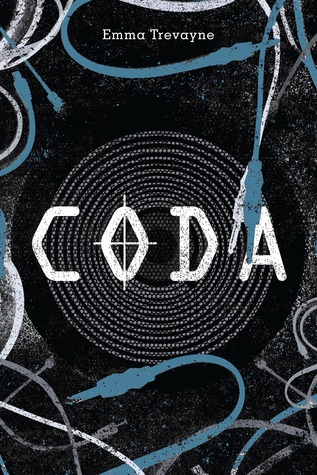 Ever since he was a young boy, music has coursed through the veins of eighteen-year-old Anthem—the Corp has certainly seen to that. By encoding music with addictive and mind-altering elements, the Corp holds control over all citizens, particularly conduits like Anthem, whose life energy feeds the main power in the Grid.

Anthem finds hope and comfort in the twin siblings he cares for, even as he watches the life drain slowly and painfully from his father. Escape is found in his underground rock band, where music sounds free, clear, and unencoded deep in an abandoned basement. But when a band member dies suspiciously from a tracking overdose, Anthem knows that his time has suddenly become limited. Revolution all but sings in the air, and Anthem cannot help but answer the call with the chords of choice and free will. But will the girl he loves help or hinder him?

I didn’t care much for the delivery, but the concept was pretty cool. My favorite part was the idea of the memory chips that everyone has, which allow family members to access memories after the person’s death. This would be wonderful! If you lose a relative, you’ll always have something to remember them by. The whole music as a drug thing was awesome and original! The people do something called “tracking” – which is basically getting high off of music. And you could OD on music. Very interesting! I did really like that bit.

But – did you see that but coming? – the unique concept wasn’t enough to make up for the glaring lack of world building. Things weren’t explained well enough for me, things like ‘hygiene cube’ and ‘trans-pod’ – yes, I can figure them out from subtext, but I’d like to at least get a picture in my head of what they looked like! They weren’t described at all. I had a lot of trouble picturing anything in the world, because you were simply told about something  and it wasn’t described to you. And what is Quadrant Two? How many Quadrants are there? What is the layout of the Quadrants? What year is it?!

Red meat is almost non-existent down here – the only land on which large animals can be kept is the giant park in the middle of the island, and even those are weak, over-cloned from the ones brought in before the siege began.

What siege? When? How long ago?

Tunnels were caved in, bridges were dismantled. To keep us safe, of course. To keep us protected in a fortress of glass and steel and concrete. The airports didn’t survive the war, and the last planes fell out of the sky when the pulse bombs went off.

Safe from what? What war? What pulse bombs? WHEN?! Argh. It was so frustrating! I also didn’t figure out what the hell an Exaur was until 1/3 of the way through the book – and then only from context – because it was never explained either. Seriously, all it would take was one second to say “blah blah Exaur – someone who’s been rendered deaf as punishment – blah blah.”

Other than that, I was just bored. The pacing was painfully slow and I struggled to finish the book. The story had fabulous potential, but the delivery was kind of stiff and dry and I couldn’t really connect like I hoped. I also didn’t care about what was happening to any of the characters. View Spoiler »In fact, one of the main characters died and I felt nothing. Not good! « Hide Spoiler

There is a mild LGBT undercurrent, but it’s not in your face. I wouldn’t even think it’s worth mentioning, but that may not be some people’s thing. It’s not exactly mine, either, but I didn’t mind it because it was so mild.