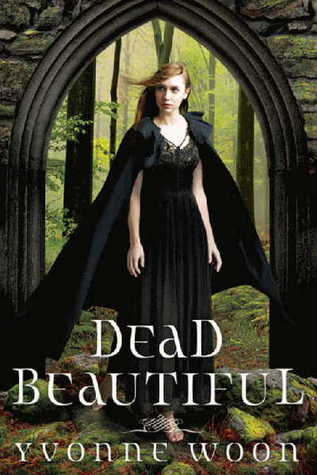 On the morning of her sixteenth birthday, Renée Winters was still an ordinary girl. She spent her summers at the beach, had the perfect best friend, and had just started dating the cutest guy at school. No one she'd ever known had died. But all that changes when she finds her parents dead in the Redwood Forest, in what appears to be a strange double murder.

After the funeral Renée’s wealthy grandfather sends her to Gottfried Academy, a remote and mysterious boarding school in Maine, where she finds herself studying subjects like Philosophy, Latin, and the “Crude Sciences.”

It’s there that she meets Dante Berlin, a handsome and elusive boy to whom she feels inexplicably drawn. As they grow closer, unexplainable things begin to happen, but Renée can’t stop herself from falling in love. It’s only when she discovers a dark tragedy in Gottfried’s past that she begins to wonder if the Academy is everything it seems.

Little does she know, Dante is the one hiding a dangerous secret, one that has him fearing for her life.

Dead Beautiful is both a compelling romance and thought-provoking read, bringing shocking new meaning to life, death, love, and the nature of the soul.

What is it with cheesy romances lately? Ugh. Honestly, this book could have easily been a 4 or 5 star if the instaluv hadn’t ruined it for me. I’m going to get my complaints out of the way first, because the premise for this one was AWESOME.

First of all, before I even met Dante I was bracing myself for a cliche romance. Eleanor was talking about him and saying how he was devastatingly gorgeous, keeps to himself, and everyone is secretly obsessed with him, perhaps a little afraid of him. Sound familiar? At this point I was rolling my eyes and thinking, Oh, boy, here we go…
Also, he can’t trust himself around Renee because he doesn’t want to lose control. CAN WE PLEASE JUST DROP THAT HORRIBLE CLICHE ALREADY?!?!! It is vastly overused and I’m getting quite tired of it. But thankfully those were the only Twilight-ish parts. Actually, for the majority of the book it reminded a bit of House of Night. And the Horticulture part had me thinking of Harry Potter.

I didn’t care for Renee very much. She was a bit petulant at times, and fairly selfish. Not to mention desperate. She actually messed up Latin on purpose to fail a test, just so she could continue to be tutored by Dante. Lame. Dante tells her from the start that he’s dangerous and she tells him it doesn’t matter, yet when she finds out exactly how dangerous he is, she runs away and ignores him. Seriously? Then he tells her he needs to talk to her and it’s important, and this is her reaction: I tried to imagine what it was he wanted to say to me. He’d profess his undying love. “Renee,” he would say, “I love you. Run away with me. We’ll go north into the wilderness and live desperately, dangerously.”

Please keep in mind that this was halfway through the book. The mention of the L word anywhere before the last 50 pages in any book typically makes me gag. Not enough time passed for that word to be used and it irritates me how it gets thrown around so much and it just becomes meaningless and people don’t even know what the word means and RAWR!! *gasps for breath* Okay, I’ll stop ranting now.

Although I now see the reason they were drawn together so much, it still doesn’t make the instaluv acceptable. It would have been a way better romance (if you even want to call it that) if she had resisted him. *coughcoughObsidiancoughcough* Because, by the time something finally happened, I would have been mentally threatening to chase them both down with pitchforks if they didn’t relieve the tension. But, no…they barely had any interaction and they were magically dating. Not really sure where that came from.
And actually the terrible part was, I was sort of wishing that he would kiss her…but not for the reason that you’d think (because I could care less about the botched romance). If you’ve read it you understand why. Yeah, that’s how much Renee was annoying me. Terrible, isn’t it?

It no longer mattered that I didn’t understand the way I  felt around him, or the way he felt around me. One touch  from him and everything inside of me blossomed with emotion: excitement, nervousness, anxiety, desire. I had never been in love before. Was this what it felt like?

NO, you idiot, that is NOT what it feels like, because you just freaking met him. That’s what you call lust.

To the rest of the class we looked like a boy and girl sitting side by side. But beneath the surface, everything within me was trying to burst out into a swirling cloud of particles, ephemeral and constantly changing, like stardust.

On that note, on to things I did like…
The air of mystery! All of the coincidental and unexplained deaths had me wondering what the hell was going on. I was totally intrigued! Strange things keep happening at the Academy, and Renee seems to be drawn to death. I was dying of curiosity by the time things finally got explained (in a bit of an info dump), so when they did my mind was reeling. I loved the idea of the story – the Monitors, Romulus and Remus, the reason for burials – it was so fascinating!!

Side note, this is how I pictured Mrs. Lynch:

Favorite character: Probably Eleanor. She didn’t annoy the crap out of me like Renee did, and Dante was just too ‘perfect’ to be convincing.