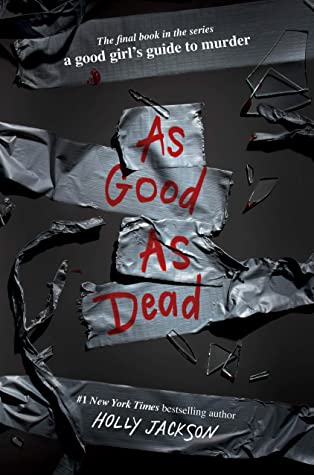 Pip's good girl days are long behind her. After solving two murder cases and garnering internet fame from her crime podcast, she's seen a lot.

But she's still blindsided when it starts to feel like someone is watching her. It's small things at first. A USB stick with footage recording her and the same anonymous source always asking her: who will look for you when you're the one who disappears? It could be a harmless fan, but her gut is telling her danger is lurking.

When Pip starts to find connections between her possible stalker and a local serial killer, Pip knows that there is only one choice: find the person threatening her town including herself--or be as good as dead. Because maybe someone has been watching her all along...

I just. Wow. I wish I could pretend that the entire ass last half of this book did not exist. I think this has been the most disappointing finale of a series that I’ve ever read, to be completely honest. It took a HARD turn in the middle of the book and completely lost me, and I was so frustrated that I almost DNFed it. I still wish I had, sadly.

It’s a shame, really. This series has been phenomenal so far, and I was hardcore on board with it until said turn happened. I will say that I thought the identity of the DT killer was quite obvious, personally – View Spoiler »I thought maybe I was wrong because it was SO obvious, but nope…it was Jason Bell. SO. OBVIOUS. Especially after Andie’s email?? « Hide Spoiler How tf was Pip not able to see that?! She’s been very smart thus far, so for her to not see that didn’t make sense at all. There were other things jumping out at me that she didn’t notice, either. Like the hairbrush on Andie’s table in the planner picture, or the initials HH. (I KNEW THAT WAS RELEVANT!! Remember in my review of A Good Girl’s Guide where I was disappointed because I thought it was this super important clue, and it ended up not even getting addressed at all?! It makes me happy that it actually meant something!)

This book was hella intense and just as amazing as the first two until the halfway point. Then something happens that (in my opinion) completely derailed everything that this series was about, and I hated it. Gonna put the rest in spoilers for those who haven’t read the book yet.

View Spoiler »The whole murder of Jason Bell and ensuing coverup was convoluted, unbelievable, and frankly fucking ridiculous. The story became more about getting away with murder than finding truth and justice at all cost, which is what I loved so much about the first two books. It’s pretty damn sad when you’re rooting for the main character to fail. I wanted Pip to get caught, and kept hoping for it. Imagine my disappointment when she got away with it. *rolls eyes* The book’s credibility just flew out the window. Pip takes SO many steps to cover up her murder and frame Max for it, yet EVERY. SINGLE. STEP goes PERFECTLY SMOOTHLY?! Yeah…that’s ridiculous. There were zero hiccups whatsoever, except maybe the police finding her headphones aka Jason’s trophy of hers. Which was conveniently explained away almost immediately. How are all of the adults in this book SO DUMB??

It also bugged me that she framed Max for the murder. Yeah, he was a piece of shit, and yeah, he absolutely deserved to be put away for rape…it’s a shame that he got away with that. But framing for murder? That was a little far. It just seemed fucking hypocritical to me that Pip was all about justice – I mean, she’s fought for the wrongfully convicted and was pissed at the court system for not getting it right with Max – only for her to do something like that. It was like this book condones murder if someone deserves it. And I enjoy a good vigilante story as much as the next person (um, Dexter yassss), but I feel like it didn’t fit this series at all. Not to mention she was making everything WAY too obvious – every single thing she did to frame Max just seemed over the top, and in my opinion would be an obvious frame from a cop’s perspective, but whatever.

It also made me hate Pip. If she’d killed Jason in self defense, I would have been fine with it. But the murder was basically pre-meditated. I get that she doesn’t trust the cops, because yeah they get it wrong sometimes, but that’s still no excuse. And not only did she make one terrible decision after another, SHE KEPT INVOLVING ALL OF HER FRIENDS?! She kept saying that she didn’t want anyone else to go down with her if she got caught, yet she still kept dragging them into it!!! She was so fucking selfish. And to be like – ‘oh I can’t tell you anything, just cover for me without question, okay?’ – seriously? Obviously they’re going to figure things out, and you’ve just made them complicit in murder, you fucking idiot. I don’t think Pip deserved a happy ending. Yes, she might have cut herself off from all of her friends and family (and how is THAT not suspicious to the cops btw?!), but the end made it pretty clear that Max was convicted for Jason’s murder and she got to have her life back. « Hide Spoiler

The gist of it? The last half made me SO. RAGEY. It was so out of character, not only for Pip and everyone else, but for the whole series itself. I loved the first half, but I’m still giving this two stars out of pure spite because I despise how this ended and will never recommend this book to anyone. This book is….as good as dead to me. Just read the first two and pretend this bullshit doesn’t exist.

2 responses to “Audiobook Review: As Good As Dead by Holly Jackson”