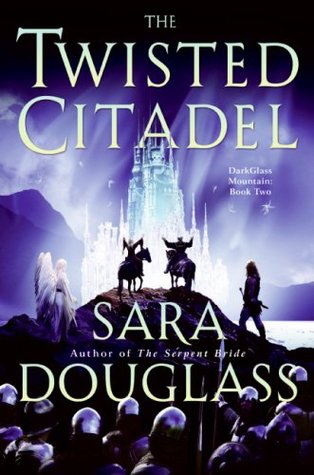 Tencendor is no more. The land is gone. But a few SunSoars remain, and a new foe walks the world.

In a time of magic and danger, three new heroes have stepped forward—Ishbel Brunelle, priestess of the Serpent Coil; Isaiah, the Tyrant of Isembaard; and Maximilian, the Lord of Elcho Falling. Yet despite their best efforts, the Dark God Kanubai has risen. And worse yet, war approaches—backed by the evil, insidious DarkGlass Mountain, hordes of insatiable Skraelings ravage the land.

While the trio struggles to keep its armies and alliances alive, the SunSoars have their own challenges, including the chance to rejoin the magical Star Dance at long last, and the appearance of the Lealfast, long-lost kin to the Icarii. The Lealfast and the Icarii may be friends . . . or deadly enemies. And as tensions rise between the two races, Axis SunSoar revives his elite Strike Force in a desperate bid to stop the darkness.

There was a lot of talk about the Threshold in this one, and it made me wish that I had read her book, Threshold. I would probably have known much more of the backstory on the pyramid, the One, and the magi!

“I find all my strength in the beat of your heart.”

It was kind of amazing how Ishbel and Maxel fell apart so badly only to come back together stronger! And ok how about Ravenna? How could I forget how much I hated her?! She was SO awful.

I loved reading the backstory of the Weeper again, and the objects in the Twisted Tower. Very cool!

The Lealfast are totally creepy but kinda cool? I’m not really sure how I feel about them. Not to mention they’re a wild card that I can’t remember. Also, the story of how they came to be – EW. That’s an image I’ll never get rid of O_O

Ishbel is a badass! She totally keeps a cool head in the face of everything thrown at her. She’s got enemies coming out of the woodwork to take her down, but she stands tall and confident, I love it!