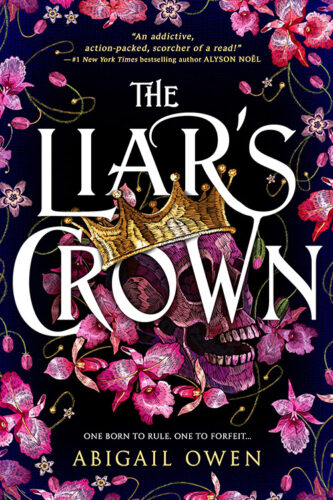 Everything about my life is a lie. As a hidden twin princess, born second, I have only one purpose—to sacrifice my life for my sister if death comes for her. I’ve been living under the guise of a poor, obscure girl of no standing, slipping into the palace and into the role of the true princess when danger is present.

Now the queen is dead and the ageless King Eidolon has sent my sister a gift—an eerily familiar gift—and a proposal to wed. I don’t trust him, so I do what I was born to do and secretly take her place on the eve of the coronation. Which is why, when a figure made of shadow kidnaps the new queen, he gets me by mistake.

As I try to escape, all the lies start to unravel. And not just my lies. The Shadowraith who took me has secrets of his own. He struggles to contain the shadows he wields—other faces, identities that threaten my very life.

Winter is at the walls. Darkness is looming. And the only way to save my sister and our dominion is to kill Eidolon…and the Shadowraith who has stolen my heart.

I wish I could simply enjoy the books that everyone else enjoys. *long suffering sigh* I mean, it wasn’t bad, it was just generic AF. Like every single other generic high fantasy book out there. I’ve read the same story a thousand times, and this one didn’t bring anything new to the table. There was literally nothing original in this book and nothing at all to stand out in my mind. The whole thing was entirely forgettable.

I was actually enjoying it in the first half, despite how generic it was. The narrator probably helped, she was pretty good! When Meren was kidnapped, I was intrigued by the kidnapper who was obviously going to be the love interest. (Also, his shadow powers were cool.) If you know me, you know I love enemies-to-lovers romance. So it had me, for a little while. However, the romance moved waaay too quickly for me, and then it COMPLETELY took over the story and I lost all interest. There was no chemistry between Meren and Reven. The “steamy” scene was super awkward. (Also THEIR NAMES. Are the basically the SAME NAME with two letter swapped, wut.) I almost DNFed. I should have.

In addition to the poor romance, none of the relationships (or characters, for that matter) are fleshed out. They all felt very shallow and I didn’t care about any of them. There was no one to root for. The whole premise of the book is based on a sisterly bond – Meren literally lives to sacrifice herself for her sister – and despite talking about how important her sister is to her, we never see that importance. I never felt that bond and it should have been the driving point of the story. But it wasn’t, because this book is a romance. It’s a romance, disguised as a fantasy about sisters. Her life is a lie? Well, so is the Goodreads synopsis, because this book is not what I thought it would be. I want my money back. (Just kidding, I didn’t spend any money on it, thank heavens.)

There was also an awkward almost love triangle happening – the end choice was clear, but I didn’t like Cain’s feelings for Meren. Can’t we just have one love interest and a best friend that’s completely platonic? What is so super speshul about Meren (who frankly has the personality of a wet rag) that she has all these dudes wanting her?!

This book was really predictable. The ending PISSED ME OFF! View Spoiler »I HATE when authors kill off characters and bring them back. It’s predictable and overdone and it robs me of whatever emotional reaction I might have had, because I know they’ll come back, and it makes me SO. INSANELY. RAGEY. I was absolutely furious when Reven sacrificed himself to get rid of the evil king AND THEN HE CAME BACK. Because of course he did. With zero explanation as to how?! WHY. JUST WHY. « Hide Spoiler

Suffice to say I will not be picking up the second book.