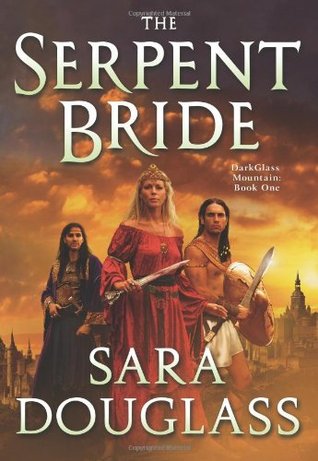 Sara Douglass has won legions of fans around the world for her epic tales of sorcery, forbidden love, and heart-pounding action. Now, with the DarkGlass Mountain saga, she reveals her biggest adventure yet.

Rescued from unspeakable horror, Ishbel Brunelle has devoted her life to a Serpent cult that reads the future in the entrails of its human sacrifices. But the Serpent has larger plans for Ishbel than merely being archpriestess, plans that call for a dangerous royal marriage balancing on the edge between treachery and devotion, and an eerie, eldritch warning: Prepare for the Lord of Elcho Falling . . .

And there are other dangers. For while Tencendor is gone, even its fall cannot destroy the Icarii. As the Tyrant of Isembaard reaches for glory, both StarDrifter SunSoar and his son, Axis, are pulled into the deadly dance of intrigue and sorcery. The DarkGlass Mountain—once known as the Threshold—is waiting, and as the Dark God Kanubai rises from his prison in exile, no one will escape unscathed.

It’s a totally different timeline and different setting than the original, but it’s in the same world, and there are a few familiar faces. I was thrilled to see StarDrifter again – I forgot he was in this! – and Axis as well. I love the little tie-ins here and there, and how Tencedor is briefly mentioned.

The best thing about reading this again was that I’d forgotten much of what happens. Things were familiar as I was reading, but I didn’t really see much of it coming. Some things were still a surprise!