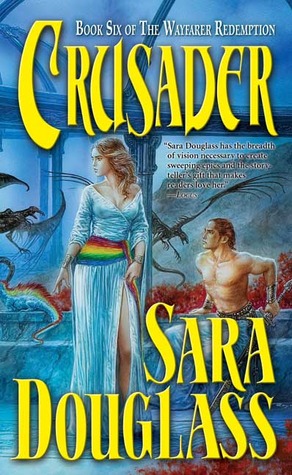 For countless millennia the Star Dance and the TimeKeeper Demons have battled their way across the universe, destroying innumerable planets, laying waste to civilizations across the cosmos.

Choosing the land of Tencendor as their last battleground, the demons break through the Star Gate. The Gate destroyed, all magic in the world is gone and the three races of Tencendor are plunged into a vortex of chaos, madness, and death.
Caelum SunSoar, son of the near-immortal Starman Axis and beloved ruler of all the land's peoples, is dead. Leaderless, those not killed outright or driven mad flee to the one place left to them, Sanctuary, a magical place created ages past to shield all who are good from the wrath of the demons.

There is for some one hope left: DragonStar, Axis's other son. Many believe he is the true StarSon, the only being that can save their world. Others are just as convinced that he is in league with the demons and will be their doom. Only DragonStar knows the truth and as he and his companions go forth to do battle he prays that he may convince all that his motives are pure.

What he does not know is that there is a traitor who plans to hand Sanctuary over to the Demons. A betrayer whose actions could force DragonStar to make a sacrifice so bloody and horrific that it could mean the destruction of everything that he holds dear in this life or the next.

And if he fails, he could doom Tecendor to an eternal hell.

I enjoyed re-reading this series so, SO much, and I’m sad that it has to come to an end! I’d forgotten how easy it was to be consumed by this world. It’s so unique and complex! Sara Douglass has truly created a world like no other, and perhaps that’s why this series stuck with me after 10 long years. I know it will stick with me for years to come, as well!

Holy crap, there’s so much death in this book! I know it leads to rebirth…but STILL. It was really hard to watch all of the characters I love suffer so much in the final battle.

Furthermore, how had I forgotten so much of this book? I think I only read this one once before, where I’d read the original trilogy at least twice and the other 2 leading up to this one twice as well, since I re-read them before this book came out. But seriously, how did I not remember this stuff?!View Spoiler »I remembered that Faraday didn’t die in the end – thankfully – but I had forgotten about Katie representing the land, and about the souls of the trees being in Ur’s terracotta pot. And that the demons had to face Drago’s ‘witches’ one on one, and that there were 5 because they represented the Sentinels. I can’t believe I forgot all that! « Hide Spoiler It was kind of nice, though, because it was almost like reading the book for the first time again! And I loved it just as much as the first time.

Like I said in my review of Crusader, I ship Zenith and StarDrifter pretty hard. (And I also said that by this late in the series you get used to the creepy SunSoar affection for their own blood) It was really difficult to watch them fall apart. View Spoiler »Even worse, to watch her gravitate back toward WolfStar. I hate that fucker with the fire of a thousand suns!! (SO glad he finally died. SO GLAD.) And after everything he did, I hated that she still cared for him. Why, Zenith?! WHY?!?! Then to watch her get torn apart by Hawkchilds right in front of StarDrifter, and for him to not make it to the Field of Flowers…it kind of breaks my heart :( « Hide Spoiler Their relationship was so heartbreaking and tragic, it kills me!

View Spoiler »So, STARDRIFTER?! I definitely forgot that he disappeared in the end. Which makes me really sad. He was one of my favorite characters besides Faraday and FreeFall, and that he can’t share in the haven of the Garden is extremely depressing!!! « Hide Spoiler

I also didn’t realize how open the ending was! WHAT HAPPENED TO FARADAY & DRAGO’S STORY?! Why is there no spin-off for them? I’ve read the DarkGlass Mountain trilogy, and while it’s tied in, I’m 99% sure Faraday and Drago are not in it. *huffs*