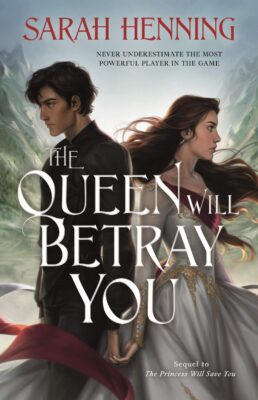 To stay together forever, Princess Amarande and her stableboy love, Luca, must part: Amarande to reclaim her kingdom from usurpers, and Luca to raise a rebellion and find his destiny. Arrayed against them are all the players in the game of thrones for control over the continent of The Sand and Sky. Facing unspeakable betrayals, enemies hidden in the shadows, and insurmountable odds, their only hope is the power of true love...

I honestly don’t remember a darn thing about the second book. I enjoyed the first book for the most part, even though it was generic AF (thanks to the fantastic audiobook narrator, I’m quite sure); but sadly I enjoyed this one a bit less than the first. I did still mostly enjoy it while I was listening, but it felt even more generic than the first book and had a bit of second book syndrome going on.

Although, Luca and Ama split up and spend most of the book apart; which I actually kind of liked, because the romance wasn’t the driving point about this book as much as it was the first (one even though they kept harping on how they’d do anything for each other).

Princess Amarande is finally on the verge of having everything she wants. To be with her true love Luca, no one nor law standing in the way. To rule Ardenia as queen outright, no marriage necessary, as Luca does the same with the reformed Torrence. To rebuild the continent of The Sand and Sky into a place not defined by archaic, patriarchal laws, but by the will of its people.

However, threats await in the shadows of Amarande’s hoped-for happily ever after. One expected and deadly to both her love and every one of her objectives. The other, unexpected, and arising with a vicious aim: revenge at any cost. Against the princess who killed him, the boy whose love made her do it, and the continent cruel enough to deserve his rage.

The King Will Kill You is the epic, pulse-pounding conclusion to Sarah Henning’s Kingdoms of Sand and Sky trilogy.

Not gonna lie, I pretty much only read this because I was 2 books in and felt the need to see it through. This was by far my least favorite of the whole series. It was just so….dull? Things were happening but I still feel like nothing happened. This series should have been a duology. It’s also geared toward a much younger audience than me, so maybe that’s why, but it just seemed very melodramatic with zero actual stakes. Characters would be freaking out about something and I’d just be rolling my eyes like ‘it’s fine, you’ll be fine.’

I also haaated a certain thing in this book that I feel was just a plot device to push this into a trilogy, when it should have been a duology all along. View Spoiler »The whole ‘Renard is back from the dead’ plot line was just unnecessary, and frankly terrible. I hated it so much!! I also despise when a book breaks its own rules. Renard was back from the dead but when someone else died (and this is totally pitiful but I don’t even remember who it was and I’m pretty sure it was someone important oops [[I went and looked and it was General Koldo. So yes someone important and I totally forgot, that’s how memorable this book is lolol]]) and they were all we can’t bring them back because (and I quote) ‘the conditions are not right.’ I – what?! Isn’t that just soooo convenient *rolls eyes*

Oh and while I’m in the spoiler tag, I strongly feel like Luca should have been the one to kill Renard because of the title. The title doesn’t fit. Boo. « Hide Spoiler

I would probably only recommend reading this series just for Ula. The main characters are pretty meh. Ula should have been the MC. Also, if you do read it? Stop at the last part of the epilogue in book 2 and pretend book 3 never existed.