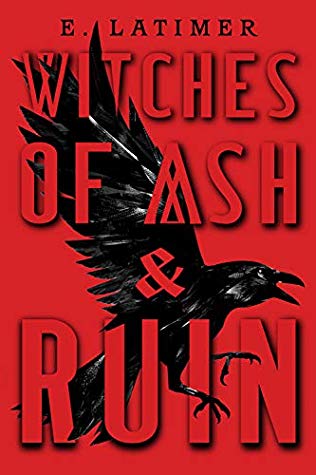 Seventeen-year-old Dayna Walsh is struggling to cope with her somatic OCD; the aftermath of being outed as bisexual in her conservative Irish town; and the return of her long-absent mother, who barely seems like a parent. But all that really matters to her is ascending and finally, finally becoming a full witch-plans that are complicated when another coven, rumored to have a sordid history with black magic, arrives in town with premonitions of death. Dayna immediately finds herself at odds with the bewitchingly frustrating Meiner King, the granddaughter of their coven leader.

And then a witch turns up murdered at a local sacred site, along with the blood symbol of the Butcher of Manchester-an infamous serial killer whose trail has long gone cold. The killer's motives are enmeshed in a complex web of witches and gods, and Dayna and Meiner soon find themselves at the center of it all. If they don't stop the Butcher, one of them will be next.

With razor-sharp prose and achingly real characters, E. Latimer crafts a sweeping, mesmerizing story of dark magic and brutal mythology set against a backdrop of contemporary Ireland that's impossible to put down.

When the publisher sent me a copy of this, I had never even heard of it. I wasn’t super interested, because I’m not usually a fan of witch books. However, when I saw that it had Celtic mythology, I was super intrigued! I knew next to nothing going into this, and I ended up being pleasantly surprised!

I was really drawn in by the prose from the very beginning! I really enjoyed the writing style – it was engaging and kept me interested even when there wasn’t much happening. In the beginning it actually had a very strong Raven Boys feel to it! The Callaghan house reminded me so much of 300 Fox Way. (It really doesn’t have much in common with RB, it just has that feel, if that makes any sense!)

The Celtic lore and mythology was FANTASTIC! That was hands down my favorite part of the book! Despite not having many descriptions about the world, I never forgot we were in Ireland. It felt like Ireland, and that Celtic background really shone through. I can’t describe how much I loved that! Also, the main villain’s name is Dubh, which just makes me think of the Sinsar Dubh, aka the blackest book, in the Fever series by Karen Marie Moning – which was what got me into Ireland and Celtic lore and Gaelic in the first place! Although I really hope there’s a pronunciation guide in the finished copy – while I’m familiar with Gaelic and its insane pronunciations (i.e. Dubh is “doo,” Caorthannach is “queer-hah-nock,” Aoibheal is “ah-veel,” sidhe is “she,” etc.), someone who has never seen any of the words before would probably have a hard time.

The world was my favorite part! I want to crawl in the pages and live there! It’s probably one of my favorite witch books I’ve read (mainly because I don’t usually like them). I love how dark and magical and creepy it was!

Also, the diversity was fantastic! Our main character, Dayna, is bi and has OCD. Her best friend and her family are Nigerian. The second main character, Meiner, and one of the other witches in her coven are lesbians (could be bi, interest in men was never mentioned though), and the other witches in Dayna’s coven are Irish. I thought Dayna’s OCD was handled pretty well when it was prominent – it really captured the anxiety she faces – but I also forgot about it at times because I feel like it was only there sometimes (and faded toward the last half) and I kind of wish it had been more prominent in the tough scenes.

I enjoyed the romance between Dayna and Meiner! It bordered the hate-to-love trope (my fave!!) – in the beginning, they don’t get along and argue a lot, even though they were undeniably attracted to one another. It developed slowly, which is a plus for me! However, I hated the awkward kinda-sorta-love-square this book had going. It was unrequited – the other two were both exes, and neither of the main characters were really interested in getting back with them. But exes thrown into the mix always annoys me because it feels like unnecessary drama and angst just for the sake of creating tension. It also didn’t help that I didn’t like Cora or Samuel (the exes I spoke of), and hated reading their chapters. (Speaking of that, Samuel’s chapters just dropped off suddenly, what the crap happened to him?!)

Honestly, I wasn’t a huge fan of Dayna. She was kind of bland. Other than the diversity she brought to the table, she really didn’t have much going for her. Not much of a personality. I loved Meiner, though! She was fierce, and I was intrigued by her from the very first scene she was introduced. I also love that she struggled with anger issues and had trouble controlling her volatile temper. For some reason I really related to that!

The main reason this book didn’t get 5 stars from me is that I had trouble connecting to it emotionally. Despite loving the writing and the world, I felt a bit of a disconnect in terms of characters. Meiner was definitely my favorite, and I was super intrigued by Dubh as the villain (side note: BLESS YOU for not making him a love interest and keeping him straight up evil), but I didn’t connect to any of the others. I also felt absolutely nothing when they were in mortal peril. View Spoiler »King Witch, Bronagh and Cora all died and I didn’t bat an eyelash. Yikes. « Hide Spoiler

I will say, though, that the ending shocked the hell out of me! I did not see that coming! Also THERE’S NO SEQUEL LISTED?! But but that cliffhanger!