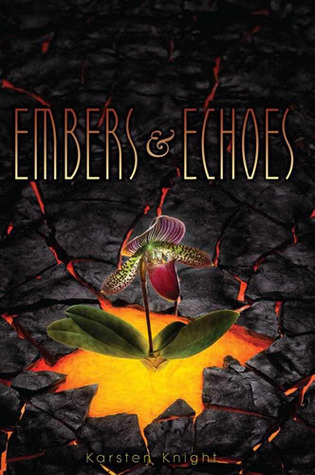 Ashline Wilde may have needed school to learn that she is actually a reincarnated goddess, but she’s ready to move beyond books. She leaves her California boarding school behind and makes for Miami, where she meets a new group of deities and desperately seeks her sister Rose, the goddess of war. But she’s also looking for love—because even though her romance with Cole had to be snuffed, Ash is a volcano goddess—and she doesn’t get burned.

This sequel to the edgy and action-packed Wildefire continues a fiery drama on an immortal scale.

Oh. My. Wow! I am currently speechless, please give me 3.5 seconds……
Okay. Ahem. So, um, this book rocked my socks. It was fast-paced, action-packed, and full of twists and turns. The stakes are high and nothing is what it seems. And boy, did everything go to hell in a handbasket…

Mr. Knight really knows how to play your emotions! I felt a vast array of them – shock, horror, sadness, joy, regret. Mostly shock. This book was a rollercoaster of emotion! There are SO many things that didn’t go the way I wanted them to, and so many losses. I can’t believe…just…ah! And the secrets revealed about the past were crazy! Everything tied together brilliantly. And you only got bits and pieces at a time, so it was like a puzzle to figure out. (I love puzzles. ^.^)

I still adore Ash. She’s fiery and strong, albeit a bit volatile at times (but that’s because she’s a volcano goddess). I gotta hand it to her, even after all of the shit that she went through – which would have reduced most of us into a sniveling fetal ball – she managed to keep her shit together and do what she had to do.

I hated Colt. I think I liked him in Wildefire, but I didn’t know then what I know now, nor did I know everything that he was responsible for. And his agenda was shocking. I hope he gets what’s coming to him in book 3!

The minor characters were fabulous.  Wes, the sexy god of night; Aurora, the spunky winged goddess; and even Ixtab (esh-tawb), the lesbian-ish reaper of death. I liked them all! And even the baddies were well-done, inciting dislike and sometimes outright hatred from me: Thorne, Bleak, Rey, and Lily. The Four Seasons were terrible and their fanatical ideas were horrifying. So were the things they did.

I’m not sure about the romance, though. Things moved pretty fast between Ash and Wes, and he was kind of a rebound from Colt – and there was an almost love triangle. Thankfully it didn’t fully form, because there was never a question of who Ash would pick (or who I would pick for that matter). It wasn’t really instalove – they didn’t get that serious – but it was a little more serious than you would expect from two people who had only known each other a few days.

The revelation about Pele – holy crap! I never saw that one coming. The whole Candelabra thing with the Spark, the Fuse, and the Flame was fabulous!

Can I please have Afterglow now? >.<

Favorite character: Probably Aurora, I really liked her. I could see her and I being friends in real life. :)

“I’m an Aztec god of night – Tezcatlipoca.”
“Texting a cat with what?”

“The looks that you and Wes have been exchanging the last forty-eight hours are so hot that I’m surprised you don’t need sunglasses to keep from getting pregnant.”
“My mother said that there were two kinds of people. The kind that run to their future, and the kind that run from their past. As someone who has run twice in her life, I can tell you this: They’re the same damn thing. You can’t run someplace new and not fill up the new space with the old stuff. The things you want to leave behind are the very things you can’t.”
With everything that happened, that quote was perfect for this book!

3 responses to “Review: Embers and Echoes by Karsten Knight”