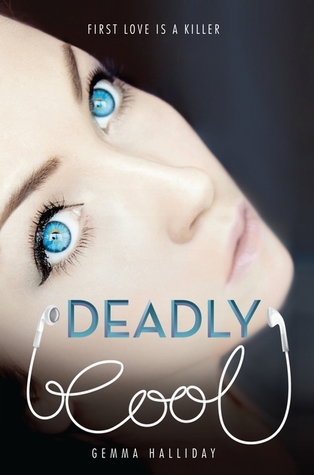 Hartley Grace Featherstone is having a very bad day. First she finds out that her boyfriend is cheating on her with the president of the Herbert Hoover High School Chastity Club. Then he’s pegged as the #1 suspect in a murder. And if that weren’t enough, now he’s depending on Hartley to clear his name.

But as much as Hartley wouldn’t mind seeing him squirm, she knows he’s innocent, and she’s the only one who can help him. Along with her best friend, Sam, and the school’s resident Bad Boy, Chase, Hartley starts investigating on her own. But as the dead bodies begin to pile up, the mystery deepens, the suspects multiply, and Hartley begins to fear that she may be the killer’s next victim.

What a quick and fun read! I devoured this one in a single sitting. It kept me guessing – I just wanted to finish it as soon as possible to find out who the heck the killer was!
Hartley had a witty voice and I enjoyed reading her sarcasm. I found myself smiling or giggling to myself regularly at the snarky and creative things she said. I loved her journey through solving the clues – the trouble she gets into snooping around was crazy!
Sam was pretty cool too. No matter what Hartley did she was a supportive friend and that’s probably what made me like her so much. I even liked Hartley’s crazy overprotective mother (whom she calls the SMother – hee hee!) who was obsessed with health food (dog food flavored chili, ew) and crazy exercise classes.
I did not like Josh. The fact that Hart protects him and works so hard to prove his innocence definitely earns respect from me. He was a sleaze, and if I were her he’d have been on his own.
It was great that the romance took a back seat in this one. Although, there was a little hint of it at the end. Loved that!! Chase – ohhhh Chase. Sexy bad boy with a softer side? Yes please!!! (and if it had been ME under the bed, I would so not have said anything!! :D)
Deadly Cool didn’t have a whole lot of depth, but it was definitely entertaining. If you’re looking for something light, pick it up!
Favorite character: Chase, of course! I hope to see more of him in Social Suicide. :)

She shot me a sugar-coated smile.
I matched it calorie for calorie.
“I’ll go,” he said.
“And that’s safer because?”
“I’m a guy.”
“Right, and having a pair of dingle balls makes you invincible how?”
I grabbed a pint of hidden ice cream from the back of the freezer. After all, Mom had said to get something from the freezer, and if I ate Chunky Monkey, there was dairy, protein (nuts), and fruit (bananas). That sounded like a balanced meal to me.