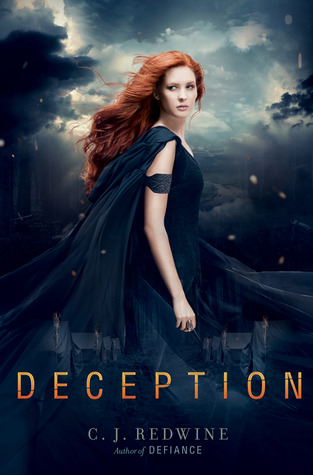 Baalboden has been ravaged. The brutal Commander's whereabouts are unknown. And Rachel, grief stricken over her father's death, needs Logan more than ever. With their ragged group of survivors struggling to forge a future, it's up to Logan to become the leader they need—with Rachel by his side. Under constant threat from rival Carrington's army, who is after the device that controls the Cursed One, the group decides to abandon the ruins of their home and take their chances in the Wasteland.

But soon their problems intensify tenfold: someone—possibly inside their ranks—is sabotaging the survivors, picking them off one by one. The chaos and uncertainty of each day puts unbearable strain on Rachel and Logan, and it isn't long before they feel their love splintering. Even worse, as it becomes clear that the Commander will stop at nothing to destroy them, the band of survivors begins to question whether the price of freedom may be too great—and whether, hunted by their enemies and the murderous traitor in their midst, they can make it out of the Wasteland alive.

In this daring sequel to Defiance, with the world they once loved forever destroyed, Rachel and Logan must decide between a life on the run and standing their ground to fight.

This review contains spoilers for Defiance if you haven’t read it.

Big thanks to HarperTeen for providing a copy for review!

WOW. If I had one word to describe this thrilling sequel to Defiance, it would be INTENSE.

Goodness, where do I start? This book picked up right where the first left off, with Baalboden destroyed and the Commander escaped. It jumped right into the action with the survivors setting out into the Wasteland. And from there on, the story grabbed me and didn’t let go! The pacing was fast and action-packed, with danger at every turn. They couldn’t get a break! With the Carrington army breathing down their necks, the Cursed One lying in wait, a traitor in their midst, and a Rowensmark tracker stalking them, I was engrossed!

Something I love about C.J. Redwine’s style is that her writing is cinematic. I had no problem picturing everything in my head, and felt like I was in the story. And the characters felt so real and convincing that at times I felt like they were people I knew! I became very attached to all of them, even the minor characters. They were all fleshed out and complex. Plus, Redwine is fabulous at writing relationships and can bring human nature to life. Because interactions with people aren’t always easy, and sometimes they’re strained and stressful. I don’t really know how else to put it into words, but this isn’t something that you see very often in books.  Also, the humor! I found myself giggling out loud quite often. I love a book that can make me laugh!

“You reminded me of fire – brilliant, warm, and strong. And every time you brushed against me, I felt like I’d swallowed some of that fire.”

I loved Rachel in Defiance. The sequel was no exception, but I must say there were times when she annoyed me; I had some mixed feelings about her. She was still the badass, headstrong girl that I knew from before, yet at times she was a bit too stubborn. I mean, I’m stubborn, but even my stubbornness has limits! She was also very damaged after killing Melkin and losing so many loved ones. She was broken and dark, and that darkness was eating away at her. She lashed out at people that cared about her when she was hurt to protect herself, and was a bit obtuse in her stubbornness sometimes. She tried SO hard to look strong, to be strong, that she forgot it was okay to cry sometimes. She refused to show any weakness (as she perceived it), even in front of those who would understand. Even in front of Logan. That was what irked me about her, is that she expected him to share everything with her, yet shared nothing in return when he could have helped her. But, because she had those flaws, I found it easier to relate to her.

She smiles, but her eyes are fierce. “I love that you always think five steps ahead.”
“I seem to recall you once comparing my plans to an overly cautious grandmother crossing Central Square.”

Logan. Sweet, practical, overprotective Logan. I rather admired him for his perseverance. I kept forgetting that he was only 19, though – he had so much responsibility on his shoulders, yet stayed mature and kept his head no matter what. He still looked at everything from a practical angle, and his constant Worst Case vs. Best Case Scenarios cracked me up!

He just makes me feel almost whole. Almost better. Like if I could just get close enough to him, everything else would fade away and never come back.

I still enjoyed the romance between Logan and Rachel. It wasn’t front and center, but was kind of a driving point in this book, because their love for each other made them stronger and at times kept them going. It was also fraught with trials. They both did things they knew the other wouldn’t approve of behind each others’ backs. They hurt each other at times. But in the end, they were always there for one another. It did irk me a couple times how hypocritical and stubborn they were when it came to each other! She deliberately put herself in danger and he got pissed at her for it, then turned around and put himself in danger…and of course, she got pissed at him for it. I understand that they don’t want to see each other get hurt, but under their circumstances, it was unavoidable sometimes.

I loooved Quinn and Willow. Especially Quinn! I think I loved him more than Logan. He was stoic, but he was gentle, brave, and honorable, and put his life on the line to keep Logan and Rachel safe. He was the voice of reason for Rachel when she refused to listen to anyone else. Willow was fierce and a bit scary sometimes, although she was loyal and protective of her brother and was a great friend.

I felt connected with all of the characters, even the minor ones like Sylph, Thom, even Frankie and Adam, who were buttheads in the beginning but slowly grew on me.

There was some mention of the old world and what it used to be…I didn’t realize until now that it’s a futuristic, post-apocalyptic setting. Either I forgot that from the first book, or there was nothing mentioned. I had been taking it as high fantasy with its own world, so that was a big surprise! I was intrigued by the way they talked about the old railroad tracks (and how they were fascinated by the idea of a train instead of horses) and the American flag and the 50 states. Very cool!

Something else I feel the need to mention: This book made me cry. That is usually really hard for me! And under the circumstances, I never thought those parts would affect me so much, so the depth of emotion I felt totally caught me by surprise. Either I’m turning into a total softy, or CJ’s writing is just that good. I think we all know which one it is, since I’d never admit to the other ;D

I did find the mystery to be a bit predictable…I guessed it right away from a very obvious reason (that the characters didn’t even think of), but thought because it was the obvious choice that I could be wrong. So I wasn’t 100% sure. When it was revealed, though, I wasn’t surprised and didn’t feel the shock that I probably should have. Thankfully it didn’t lessen my enjoyment of the journey with the characters in finding out the truth! And there was a pretty good twist at the end regarding Logan that I never saw coming!

AND THE ENDING. How could you leave it like that, CJ? Howww?! Things were left completely wide open! And through talking to her on twitter, I’ve come to find that book 3 doesn’t come out until AUGUST OR SEPTEMBER. OF NEXT YEAR. *cries*

[He] stares at me like I’m up on the Claiming stage until I tell him that if he can’t find something better to do with his eyes, I’ll remove them from his face.

“Don’t screw it up.” He winks at me.
“If your eyelid twitches one more time while you’re looking at me, I’m going to remove it and feed it to the birds.”

Did I mention I love Rachel?

Sylph’s fingers are much gentler than Rachel’s. She treats my cut like a new friend she’s just getting to know while Rachel treats wounds like challenges that must be overcome through sheer strength and tenacity.