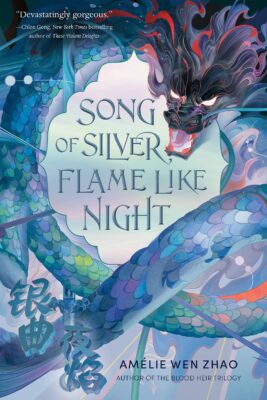 In a fallen kingdom, one girl carries the key to discovering the secrets of her nation’s past—and unleashing the demons that sleep at its heart. An epic fantasy series inspired by the mythology and folklore of ancient China.

Once, Lan had a different name. Now she goes by the one the Elantian colonizers gave her when they invaded her kingdom, killed her mother, and outlawed her people’s magic. She spends her nights as a songgirl in Haak’gong, a city transformed by the conquerors, and her days scavenging for what she can find of the past. Anything to understand the strange mark burned into her arm by her mother in her last act before she died.

The mark is mysterious—an untranslatable Hin character—and no one but Lan can see it. Until the night a boy appears at her teahouse and saves her life.

Zen is a practitioner—one of the fabled magicians of the Last Kingdom. Their magic was rumored to have been drawn from the demons they communed with. Magic believed to be long lost. Now it must be hidden from the Elantians at all costs.

When Zen comes across Lan, he recognizes what she is: a practitioner with a powerful ability hidden in the mark on her arm. He’s never seen anything like it—but he knows that if there are answers, they lie deep in the pine forests and misty mountains of the Last Kingdom, with an order of practitioning masters planning to overthrow the Elantian regime.

Both Lan and Zen have secrets buried deep within—secrets they must hide from others, and secrets that they themselves have yet to discover. Fate has connected them, but their destiny remains unwritten. Both hold the power to liberate their land. And both hold the power to destroy the world.

This book was awesome! I got an ARC at YALLfest, and honestly I was just in it for the cover and the fact that it’s Asian fantasy. For some reason I was afraid I wouldn’t like it, even though I haven’t read anything else by Zhao. I went in with little to no expectations, and the result? I was blown away!

First of all, it’s been a long time since I’ve read a book so cinematic! In the opening scenes where Lan was visiting Old Wei to trade stuff, I could picture it so clearly in my mind that it was like a movie! I could feel the atmosphere of the shop. It felt so real, and I want so badly for this to end up on the big screen someday! There were a few other scenes like that, too, and I kept coming back to them in my head because they were so vivid that it was almost visceral. I kept thinking about it even when I wasn’t reading.

The world building was fantastic! The magic system is intricate, and SUPER cool. I loved the idea of the qì with its yīn (death) and yáng (life) energies, the way they worked in tandem, and the way they were used to fuel magic. The history was also very fleshed out. (Um, the Demon Gods may be evil, but I thought they were awesome, just sayin’) I can tell that Zhao put a lot thought into the world of this book!

I loved the characters, too! Lan was feisty and prickly and I love that she always pushed back and questioned things. Zen was stoic in a dark and broody way, but kind of a marshmallow! I thought they were great together and the romance was tender and sweet. Although, I do wish it would have taken a little more time to develop. I wasn’t quite as invested as I’d hoped to be, considering I enjoyed both of their characters, because the romance felt a bit rushed to me. I think that’s really the only complaint I have about this book, though!

I might not have been emotionally invested in the romance, but I was emotionally invested in the characters. There was one scene that really surprised me when it made me cry! View Spoiler »I actually cried when the Grandmaster died! I had a *feeling* that Zen was about to stab him, but I still gasped out loud when it happened. Then, as if it wasn’t bad enough that Amélie stabbed me in the heart, but she had to go and rip out and stomp on it for good measure by revealing that the Grandmaster was actually Lan’s father, and she had no chance to have a relationship with him. Because now he’s DEAD. What the F U C K, Amélie. « Hide Spoiler

There were some great twists at the end, too! View Spoiler »Not only the part about the Grandmaster being Lan’s father, but also that Lan’s seal actually contained a Demon God, the Silver Dragon. Didn’t see that one coming! With both Lan and Zen possessing a Demon God, « Hide Spoiler I’m very interested to see where the next book goes, especially after that ending!