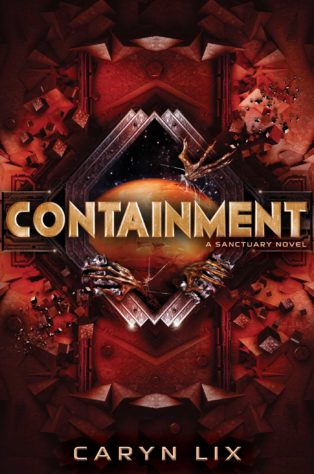 Ex-Omnistellar prison guard Kenzie and her superpowered friends barely made it off Sanctuary alive. Now they’re stuck in a stolen alien ship with nowhere to go and no one to help them. Kenzie is desperate for a plan, but she doesn’t know who to trust anymore. Everyone has their own dark secrets: Omnistellar, her parents, even Cage. Worse still, she’s haunted by memories of the aliens who nearly tore her to shreds—and forced her to accidentally kill one of the Sanctuary prisoners, Matt.

When Kenzie intercepts a radio communication suggesting that more aliens are on their way, she knows there’s only one choice: They must turn themselves in to Omnistellar and destroy the ship before the aliens follow the signal straight to them. Because if the monstrous creatures who attacked Sanctuary reach Earth, then it’s game over for humanity.

What Kenzie doesn’t know is that the aliens aren’t the only ones on the hunt. Omnistellar has put a bounty on Kenzie’s head—and the question is whether the aliens or Omnistellar get to her first.

In case you missed my review for Sanctuary, I absolutely loved the first book! It was gripping, the aliens were chilling, and I loved the dark Alien-esque feel it had going for it. It was a space horror through and through and kept you on the edge of your seat.

This book? Not so much. There was some major Second Book Syndrome going on here. The parts that I loved so much about the first book – namely, the scary aliens – were almost missing from this book. There were things happening but it didn’t feel like anything was really happening, if that makes any sense? The first half felt very redundant. It felt like there wasn’t much plot except “stop the ship’s signal from reaching the aliens.” I was actually quite bored for the majority beginning, and the middle really dragged. There was such a buildup in the beginning leading up to the inevitable “aliens receive ship’s signal” that it was almost painful. They kept talking about the aliens and what would happen if they got the signal, and I desperately wanted the aliens to come back and spice things up. I missed that from the first book!

Sadly, I didn’t get what I wanted until the last third of the book. So it didn’t get exciting for me until three hundred pages into the book. That’s a lot of pages to not grab my full attention. Like I said, I was pretty bored until the real action started. I didn’t really care about what was happening until that point, because it just felt like a bunch of running, getting caught, and escaping (followed by more running) and that was the extent of events leading up to the aliens returning.

View Spoiler »I hated the big twist of Matt being alive. It made his death (and Kenzie’s PTSD over killing him) feel cheap and contrived, as well as making the first half of the book where Kenzie did nothing but dwell on it completely pointless. It also felt like it was out of left field, deus ex machina. It made zero sense and was completely implausible even if you suspend belief for the fact that it’s sci-fi and the kids have extraordinary powers. He had no pulse, wasn’t breathing, on a ship full of murderous aliens that BLEW THE FUCK UP and he’s alive? Really? “Oh but the ship only exploded because I took the shuttle to safety.” Yeah, okay. « Hide Spoiler

Okay, that looks bad, doesn’t it? It’s not that I didn’t like the book, it’s just that I felt massively underwhelmed and disappointed after loving Sanctuary so much. The sequel was definitely missing the magic of the first book. On the bright side, though, it was actually a pretty fast read despite my lack of interest.