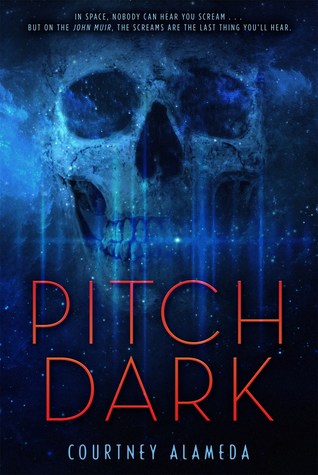 Set against a future of marauding space scavengers and deadly aliens who kill with sound, here is a frightening, fast-paced YA adventure from the author of the acclaimed horror novel, Shutter.

Tuck has been in stasis on the USS John Muir, a ship that houses Earth’s most valued artifacts—its natural resources. Parks and mountains are preserved in space.

Laura belongs to a shipraiding family, who are funded by a group used to getting what they want. And they want what’s on the Muir.

Tuck and Laura didn’t bargain on working together, or battling mutant aliens who use sound to kill. But their plan is the only hope for their crews, their families, and themselves.

In space, nobody can hear you scream . . . but on the John Muir, the screams are the last thing you'll hear.

Holy WOW, that was intense!!!! I have to admit that this one started out a bit rocky. When I first met Tuck, it seemed like his narrative was trying too hard to be a cocky teenage male. (Also, there was an unnecessary comparison of his shrunken balls to walnuts, like why??) But in the first few pages this book grabs you by the balls (see, now he’s got me talking about balls) and doesn’t let go!

The monsters in this book – mourners, weepers, griefers – were EPIC!! The fact that they kill with sound is unique and quite terrifying. I’ve been craving some YA horror that’s actually scary, and this one delivered. There were scenes were I was all:

(Um, the fester?! Eww?!?!) It was SO FREAKY AND INTENSE. I was white-knuckling the book with wide eyes – I’m sure it’d be pretty comical to someone watching me! This book was creepy as hell, GORY, and rather disturbing at times. I loved that!! This is exactly my cup of tea! It’s definitely not for the feint of heart, though.

The main complaint I have about this book is that the world was really hard to grasp sometimes. I had trouble picturing the descriptions in my head because they were a bit muddled, I guess? And I didn’t really understand some of the world. I could tell a lot of thought went into the world, because it was quite complex – but it was rather poorly explained. We didn’t get a lot of whys behind the world. Pitch Dark is the name of the book for crying out loud, and they’re still just a faceless entity in my mind. We only got vague snippets regarding the terrorist group that I feel should have been a large focus. I also would like to know how the passengers aboard the John Muir came to be the monsters. I got a vague gist of some bioterrorism, but no real explanation.

I also had trouble understanding the difference between the monsters. The mourners were pretty easy because they were the ones we saw for 99% of the novel. But I couldn’t begin to tell you the difference between a weeper and a griefer. We saw one griefer, once (and I was a bit confused on that one – are they blind too, or no??) – but I don’t think we ever saw a weeper? *shrugs*

The two main characters were fabulous – despite the switching POVs (which can be suuuper hit or miss for me), I never got lost in them. This is a book where the switching POVs were done superbly. There was a clear distinction of personality and tone between Laura and Tuck. I loved how badass they both were, in their own ways. Plus Laura was Latina – I enjoyed that bit of diversity a great deal because there is a lot of Spanish in the book (I enjoyed trying to translate without Googling – I haven’t used my Spanish skills since high school, heh)! She had a strong sense of family and was determined and fierce! Tuck was more of a loner, out of fear of losing people if he allowed himself to care about them, and to be honest he came off as an asshole in the beginning. He had a devil-may-care attitude and used his sarcasm as a weapon to battle fear and pain, but over time he grew on me! He had a good heart under his cocky exterior.

The supporting cast, however, was quite lackluster. Despite Tuck’s talk of a close knit society on the John Muir, we don’t meet any of them except his father figure, Aren (who had zero personality of his own other than a stern and authoritative “father figure”). I found that to be a bit odd. Other than Laura’s family, two friends, and the antagonists (Dr. Smithson and her son), everyone else is just a nameless face. None of the other characters were fleshed out at all. Even the main antagonist of the story (the hacker) didn’t seem to have much backstory or motivation. View Spoiler »I feel like the hacker’s identity – Faye – was made WAY too obvious when Tuck pointed out that she was acting after Laura disappeared. This is a huge example of telling instead of showing, which is a major turnoff in writing. Let me figure things out for myself! Without that major tell giving her away, I might have been broadsided when the “twist” of her identity was revealed in the end. I also found it a bit out of character that she would suddenly go bad after being Laura’s “best friend” for her whole lifetime, with zero tells that there was something lurking under the surface. That was odd to me, too. « Hide Spoiler

I had trouble connecting to the characters, but the creepy atmosphere and disturbing quality of the monsters – making this a very Alien-esque read – were the driving point for me, so despite the complaints I had, I still really enjoyed this dark and gruesome book!