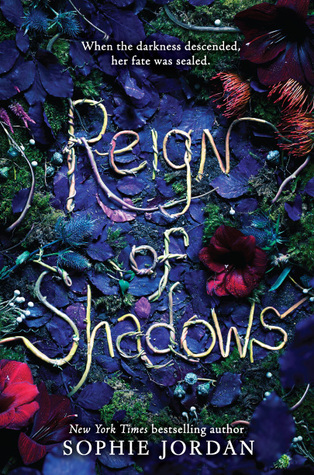 Seventeen years ago, an eclipse cloaked the kingdom of Relhok in perpetual darkness. In the chaos, an evil chancellor murdered the king and queen and seized their throne. Luna, Relhok’s lost princess, has been hiding in a tower ever since. Luna’s survival depends on the world believing she is dead.

But that doesn’t stop Luna from wanting more. When she meets Fowler, a mysterious archer braving the woods outside her tower, Luna is drawn to him despite the risk. When the tower is attacked, Luna and Fowler escape together. But this world of darkness is more treacherous than Luna ever realized.

With every threat stacked against them, Luna and Fowler find solace in each other. But with secrets still unspoken between them, falling in love might be their most dangerous journey yet.

With lush writing and a star–crossed romance, Reign of Shadows is Sophie Jordan at her best.

Wow. This book was amazing! I absolutely loved the world. It was brilliant and creepy! And INTENSE. I was hooked right from the start. The premise is so awesome – the world is in perpetual dark because of a never-ending eclipse, and it’s not safe to be Outside anymore because these creepy things called Dwellers roam the land and attack people. Also, bats are like 4 feet tall. It was SO awesome! I’ve never read anything like this book. The only thing I have to compare it to is the movie Pitch Black, except the creatures don’t fly. (I freaking loved that movie, btw.)

There were so many heart-pounding, edge-of-your seat action scenes in this book! There were also some pretty epic twists thrown in there, which I did NOT see coming. It takes a lot to surprise me these days, and that’s something I really value in a story. View Spoiler »Um, Luna is BLIND?! Like, what!! It was a very early reveal, but even in the few chapters beforehand, I had NO idea. It’s so cleverly written, you never think twice about it. When Luna walked in on Fowler naked and he realized she was blind because she didn’t react at all (hilarious scene!), I actually flipped back through the pages to re-analyze her actions because I seriously had no idea she was blind. But there was never mention of seeing anything, or colors, or anything like that. There was a lot of focus on the other senses particularly sound, but I didn’t make the connection. Totally broadsided me! BRILLIANT writing. Also, FOWLER IS THE KING’S SON?! Like wtf?!?! Didn’t see that one coming, either! There were no hints toward it (or at least I don’t think there were), so when he dropped the “he’s my father” bomb I was speechless. « Hide Spoiler

I am super impressed by how vastly Jordan’s prose has improved since Firelight. I read that book a few years back, and while the concept was great, the book itself didn’t leave much of an impression on me. That was not the case here! Jordan’s writing is very engaging. There was never a single dull moment, and I eagerly soaked up every single sentence. Her imagery was very vivid – this book was cinematic!

I loved the romance between Luna and Fowler – there was a nice slow burn between them. The attraction was there (for Luna at least) right from the start, but it wasn’t instalove. Given the circumstances, I think Luna’s reaction to Fowler made sense for her situation. She’s never been outside the tower walls, and never seen a boy before. Of course she would be intrigued by him. But things didn’t move too fast, thankfully!

I really enjoyed the character development too. In the beginning, Luna is very naive and has hope. She still sees beauty and wonder in the world. In a kill-or-be-killed world, she’s the kind of girl who sacrifices precious water supply for a man who’s already dying. Fowler, on the other hand, is bitter and pessimistic. He knows that the world is a dark place, and expects the worst at every turn. It’s every man for himself. It really drove home the point that it’s a dark, unforgiving world. Bad things happened. People died. He refused to show emotion because he believed it to be a weakness. I love that over time, Luna softened his hard edges!

THAT ENDING THOUGH. Man, it totally sucks that I read this book so early, because I’m sure there’s a loooooong wait for the next book. I can’t wait to find out what happens and I’m super excited to see more of this dark and haunting world Sophie Jordan has created!

“Hope is all there is. All we have. And love. Or what’s the point of any of it?”

“Life is full of regrets. They’ll cripple you if you let them.”

7 responses to “Review: Reign of Shadows by Sophie Jordan”