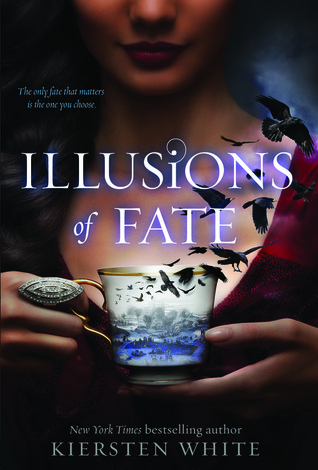 “I did my best to keep you from crossing paths with this world. And I shall do my best to protect you now that you have.”Jessamin has been an outcast since she moved from her island home of Melei to the dreary country of Albion. Everything changes when she meets Finn, a gorgeous, enigmatic young lord who introduces her to the secret world of Albion’s nobility, a world that has everything Jessamin doesn’t—power, money, status…and magic. But Finn has secrets of his own, dangerous secrets that the vicious Lord Downpike will do anything to possess. Unless Jessamin, armed only with her wits and her determination, can stop him.Kiersten White captured readers’ hearts with her New York Times bestselling Paranormalcy trilogy and its effortless mix of magic and real-world teenage humor. She returns to that winning combination of wit, charm, and enchantment in Illusions of Fate, a sparkling and romantic new novel perfect for fans of Cassandra Clare, The Madman’s Daughter, and Libba Bray.

While fairly fluffy (as per usual with Kiersten White), Illusions of Fate was a cute and magical read!

I liked Jessamin for the most part. She was stubborn, but determined, and stood up for what she believed in no matter what. I love that she’s not white! It’s so rare to find that in YA, it was refreshing to have an MC with a different background. I’m not quite sure how I felt about Finn, though. At times he reminded me a bit of…Edward. Unfortunately. Just in the beginning, though! His hot and cold mood swings in the beginning annoyed me. But he did change as the book went on, dropping his irritating aloofness.

But the two characters that stole the spotlight for me were Sir Bird and Eleanor. Sir Bird was probably the coolest bird ever! View Spoiler »Which is why I probably should have been a little more upset when he died. I guess I just didn’t think he was actually dead. « Hide Spoiler And Eleanor was charismatic and funny, bringing life to the plot line. I loved her!

I feel like the racism and classism was portrayed very well. The history between the Melenese and the Alben was easy to pick up on, even though it wasn’t directly explained. The rivalry between them was ancient, much like the racism we face in our world. The Melenese, islanders with a darker complexion, were viewed as lower class, island “rats.” The Alben were the higher class, the nobles. Kiersten did a great job putting that together.

I really enjoyed the magic aspect! It was what made the book for me. There were some darker undercurrents that I found interesting as well. Killer crows and torture by finger breaking, oh my! I would have loved to see much more of that!

I love, love, LOVED the shadow thing. Loved it! Freaking brilliant :) And when Finn was talking about his parents shadows I totally got goosebumps. DAWWW.

My two main complaints with this book were 1) I wasn’t really sold on the romance. Things escalated pretty quickly in the beginning, and while the L word wasn’t thrown around (thank heavens), I feel like the interactions between Finn and Jessa when they first met were a tad too intimate for strangers. 2) It didn’t really stand out. I enjoyed it while reading it, but I don’t feel like as if this book will stick with me.

I also didn’t feel much of anything while reading it. View Spoiler »As I mentioned above, with Sir Bird, but also with Finn. I knew that he wasn’t dead, so that kind of robbed me of whatever emotional reaction I should have had when he “died.” A HEA was just too predictable here. « Hide Spoiler While that part was predictable, there was a pretty big twist toward the end that wasn’t. I didn’t see that coming at all! Well played, Kiersten White, well played.

While this was technically a historical novel, it didn’t read like one. It read more like High Fantasy. Which is probably why I didn’t have a problem with the historical aspect!

Side note of aggravation: The cover is lovely, but the girl on the it, really?! Yet another victim of white out. *sighs* At least she has dark hair…

5 responses to “Review: Illusions of Fate by Kiersten White”