« Review: If I Stay by Gayle Forman
Early Review: Lies Beneath by Anne Greenwood Brown »
Posted by Jessi (Geo) on January 31, 2012 | 2 Comments 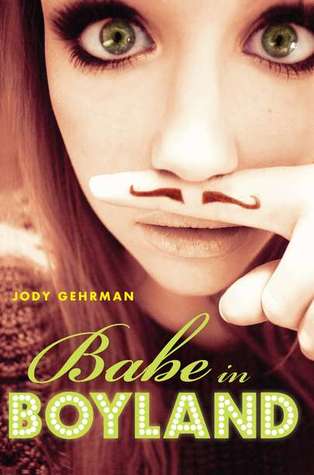 When high school junior Natalie-or Dr. Aphrodite, as she calls herself when writing the relationship column for her school paper-is accused of knowing nothing about guys and giving girls bad relationship advice, she decides to investigate what guys really think and want. But the guys in her class won't give her straight or serious answers. The only solution? Disguising herself as a guy and spending a week at Underwood Academy, the private all-boy boarding school in town. There she learns a lot about guys and girls in ways she never expected-especially when she falls for her dreamy roommate, Emilio. How can she show him she likes him without blowing her cover?

I had mixed feelings about this book. I’m a tomboy, so girls acting too much like the epitome of a girl irritates me. While I thought the reason for Natalie becoming ‘Nat’ for a week was rather silly (why do so many girls think that getting boys to like them is the only thing that matters in life?!), I do like the idea of it. I haven’t seen She’s the Man (I don’t like Amanda Bynes), but there’s a manga I love called Girl Got Game where the female protag dresses as a boy to play basketball. The whole undercover thing is interesting to me.

Natalie kind of annoyed me at first. She was shallow and complicated and cared too much about what other people thought about her. As the story went on, though, she earned my respect. She got in touch with her masculine side and found out that boys and girls aren’t quite as different as they think they are. I loved how she saw everyone in a different light when she took a step back and saw it all as an outsider.

I didn’t care much for Chloe, she seemed rather bitchy and duplicitous. I did really like Darcy (she has pink hair!), playful and understanding, and Emilio, sexy and mysterious with a sensitive side. Summer is snide and standoffish, so of course she induces hatred in the reader – she certainly did in me. There were a couple times I wanted to clock her in the mouth.

This book really highlights the quote, “Men are from Mars and women are from Venus.” It was a light and cute read and I enjoyed it.

I thought the main chasm was between men and women. Now that Chloe’s pissed off at me for trying to protect her, I’m starting to wonder. Maybe all human beings are destined to misunderstand each other, regardless of our chromosomes.
So true! I really don’t think that has anything to do with gender.

Plot: 3.5/5
Writing style: 3.5/5
Not as funny as I thought it would be, but still had the humor element.
Characters: 3/5
Mostly realist but still had the high school mentality.
Pace: 4.5/5
Cover: 5/5
I love the cover! Her eyes are gorgeous and I love the drawn on mustache.

Cute and quick. Not much depth but definitely worth the read.

2 responses to “Review: Babe in Boyland by Jody Gehrman”